Why are Zionists mocking Abbas for acknowledging Zionism? 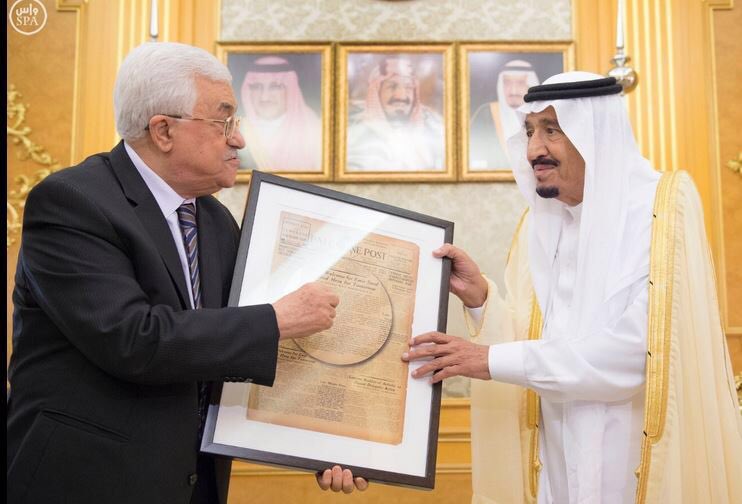 Mahmoud Abbas presents Saudi King Salman with a framed front page of the Palestine Post during a meeting at the Saudi Red Sea resort of Jeddah, June 18, 2016 (Twitter)

Mahmoud Abbas, the president of the Palestinian Authority, visited Saudi Arabia this month and presented King Salman with a framed 1930s-era copy of the Palestine Post.

The gift is not exceptional, maybe a little dull. But there are folks who are calling Abbas out – mocking him, even – for being a “Zionist.”

Weirdly, the mockers are all Zionists.

Two days ago, David Brinn, an editor of the Palestine Post’s successor, the Jerusalem Post, posted a photo of the encounter on Facebook, and jokingly wondered whether Abbas was pointing out a typo.

(Brinn, an old colleague, neighbor and buddy of mine, has noted the propensity of Jerusalem Post readers to rise up as an aggrieved assembly at the mildest of errors.)

Mahmoud #Abbas presents Saudi King Salman with a framed copy of 'The Palestine Post'. Wonder if he's a subscriber. pic.twitter.com/B02y7RlrRV

Brinn and others pointed out that the Palestine Post was then, as the Jerusalem Post is now, the voice of Israel’s English-speaking Jewish nationalist community.

A lot of folks in Hasbara-land thought this was pretty funny. Ofir Gendelman, who handles Arab media for Prime Minister Benjamin Netanyahu, tweeted: “Abbas gave the Saudi king a copy of the ‘Palestine Post’ as a present. Didn’t he know that it was a Zionist paper?”

Is Abbas’ gift any stranger than this type of pro-Israel reaction?

No, I don’t think Abbas was making a Zionist gesture by handing the king the Palestine Post. Pro-Israel blogger Elder of Ziyon, calling the photo “hilarious,” noted that the newspaper in the frame is dated August 13, 1935 — and was undoubtedly chosen because it features a front-page report of a visit to the Holy Land by Emir Saud, the Crown Prince of Saudi Arabia (who happens to be Salman’s half brother).

And I am pretty sure Abbas knows what the Palestine Post represented. The Palestinian president probably thought it not unusual at all – normative, even – that the Jewish nationalist publication in the 1930s would cover the arrival of the Saudi royal.

Abbas has been all over the map on whether the Jewish presence in the Holy Land is normative – sometimes promulgating conspiracy theories of Nazi-Zionist collaboration, other times forthrightly affirming the “Jewish right to the land of Israel.”

But one of the most consistent thrusts of the pro-Israel argument – of Netanyahu’s argument – is that Abbas and the people he leads should accept that the Jewish presence in Israel, Palestine, the Holy Land is a matter of fact (as well as matter-of-fact).

He does exactly that – however much as an afterthought, that’s what is happening in the picture – and he’s mocked for it?

By folks who call themselves pro-Israel?

How does that help?