‘Reverse Birthright’ gives Israelis a look at America’s Jews, from Philip Roth to the Three Stooges 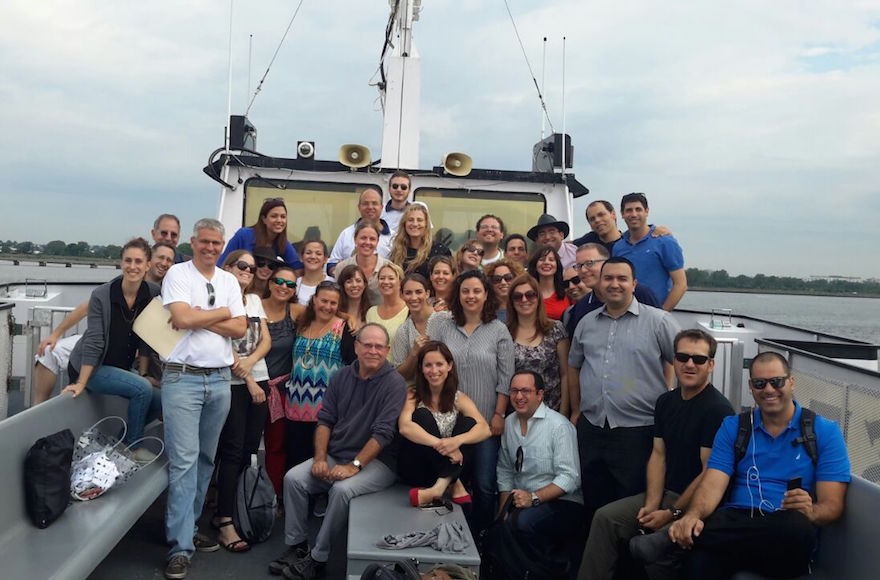 NEW YORK (JTA) — Instead of visiting the Western Wall, they visited Ellis Island. Instead of hiking in the Negev Desert, they took a day trip to a Habonim-Dror summer camp. Instead of basking in the sun on the Tel Aviv beach, they watched a production of “Fiddler on the Roof.”

The trip, which began June 18, is the highlight of a yearlong master’s degree program at Haifa University, the Ruderman Program for American Jewish Studies. The program teaches 25 students about American Jewish history, religion and culture to have them better understand and identify with their American counterparts. The program was created by the Ruderman Family Foundation, which works to strengthen ties between Israel and U.S. Jewry.

“In Israel they don’t teach about Jewish Americans,” said Haifa University history professor Gur Alroey, who runs the program. “American universities are full of Israel studies departments. It’s important that Israelis will understand that they live in Israel but they’re not alone.”

In the program, students attend class all day once a week, allowing them to work on the side. Classes cover everything from American Jewish immigration and American Zionist movements to American Jewish culture and contemporary issues.

Along with history books like Arthur Hertzberg’s “The Jews in America” and Jonathan Sarna’s “American Judaism,” students read excerpts from “Portnoy’s Complaint” by Philip Roth and some Three Stooges films from the late 1930s. They also looked at how Hebrew translation to English changed as American Jews grew more assertively Zionist.

Omri Asscher, who teaches a course on American Jewish culture and identity, said students already appreciated cultural touchstones like “Seinfeld,” or superheroes like Batman and Superman, before knowing or caring that they were created by American Jews. But Asscher said a cultural disconnect remained. His students, for example, had trouble appreciating the role decorative objects — “tchotchkes” like a cup with Hebrew writing or even a Jewish National Fund charity box — played in solidifying communal Jewish identity.

“We talked about how being a Jew in America is a question of choice,” Asscher said. “You can choose to be, and you can choose not to be. And if you choose to be, you need to be active in that regard. That’s not a given in Israel.”

The program attracts some 100 applicants each year, but the 25 students don’t necessarily reflect the average Israeli. Many have had experiences with non-Orthodox movements, which have a scant presence in Israel. A few are studying to be Reform rabbis. Others have lived abroad for long periods of time.

The trip is billed as a “reverse Birthright,” and aims to get Israelis to like American Jews in the same way Birthright aims to create pro-Israel Americans. But while Birthright has brought more than half a million young Jews to Israel, the master’s program is orders of magnitude smaller. Sarna, who teaches American Jewish history at Brandeis University, said the program aims for depth of impact rather than breadth.

On the trip, which takes place entirely in New York, the students hear from leaders of all four major denominations and meet with a range of Jewish organizations. They explore the history of Jewish immigration to America, visiting Ellis Island as well as the Tenement Museum on Manhattan’s Lower East Side. Along with “Fiddler on the Roof,” they attend a Yiddish theater performance and see a documentary on American Jews in film. The trip also includes a lecture by journalist Peter Beinart, a self-described liberal Zionist.

A few students said they were surprised by how much American Jewish movements have in common, even as they emphasize their differences. Almost everyone they meet, said student Yehuda Lahav, speaks positively about the LGBT community.

“I don’t know if they realize that the direction all the streams are going is the same,” he said. “Some have been there for a while, some will get there in the future. None of them see a contradiction between Jewish life and American life.”

The students are largely bullish about the American Jewish community and the values it represents. Some praised American Jewry’s pluralism and downplayed the challenges and divisions that afflict its subgroups. Israelis, a few suggested, have much to learn from Judaism’s success in America’s free market of religion.

“American Judaism, despite the challenges and problems it’s facing, can embody a different and in many ways positive model of Judaism that is very important for us in Israel to know,” student Assaf Gamzou said. “Israelis a lot of the time have a very monolithic sense of themselves and our place. Sometimes we think Israel is the center of Jewish experience, but it is not necessarily so.”