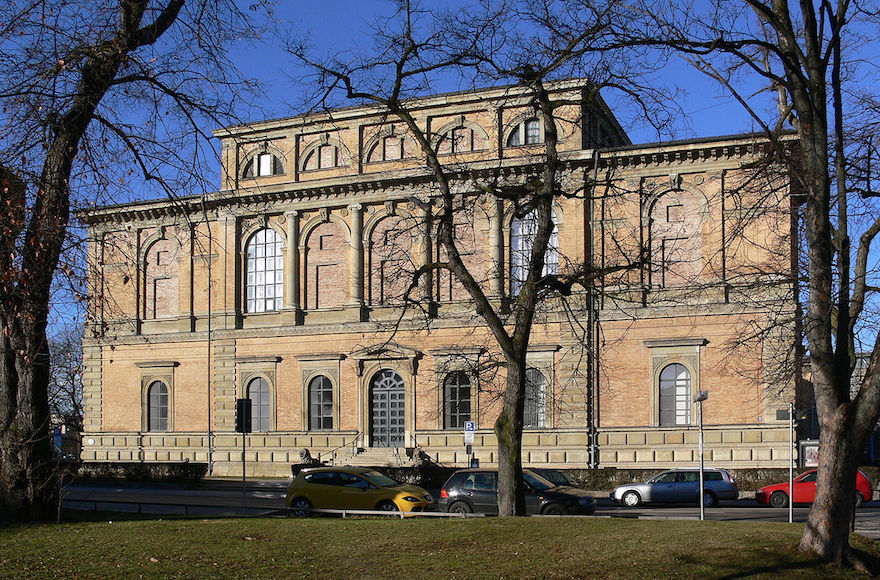 The facade of the Alte Pinakothek art museum in Munich, one of the Bavarian state galleries. (Wikimedia Commons)
Advertisement

BERLIN (JTA) — A state museum in Munich profited from art looted by the Nazis at least until the 1990s, a new investigation has revealed.

In a joint probe, the Munich-based newspaper Süddeutsche Zeitung and the British NGO Commission for Looted Art in Europe found that the Bavarian State Galleries and many other such institutions have been sitting on art that was forcibly “purchased” from Jewish collectors under the Nazi regime.

The museums have tried to disguise the origin of the artworks, and even sold some of them without seeking the rightful owners or their heirs, according to the investigation.

The deception began as soon as American authorities handed over the restitution task to the Bavarian administration in 1949, according to the report. Thousands of artworks were in question.

Reportedly, German authorities kept some and sold others at deflated prices, including to members of prominent Nazi families such as the widow of Hermann Goering and Henriette von Schirach (nee Hoffmann), the wife of Hitler’s district governor, or “Gauleiter,” in Vienna.

The newspaper traces the story of how von Schirach came by one small painting, “Picture of a Dutch Square,” by Johannes van der Heydes that originally belonged to a Czech-Jewish couple, the consul general to Vienna, Gottlieb Kraus, and his wife, Mathilde. The Kraus family fled to the United States in April 1938, putting their possessions in storage.

But the property was later confiscated by the Gestapo and artworks were sold to, among others, the planned “Führermuseum” in Linz, Austria, and to the father of von Schirach, Heinrich Hoffmann, Hitler’s official photographer and an art collector.

After the war, the painting was among the thousands of works to be returned to rightful heirs. But the Bavarian State Galleries sold it back to von Schirach for 300 Deutschmark, and she promptly auctioned it off for 16,000 Deutschmarks to the Xanten Cathedral Association; it was on display in the cathedral until 2011.

Meanwhile, the paper reported, the great-grandson of the Krauses, John Graykowski, has been seeking restitution of the family’s collection in vain.