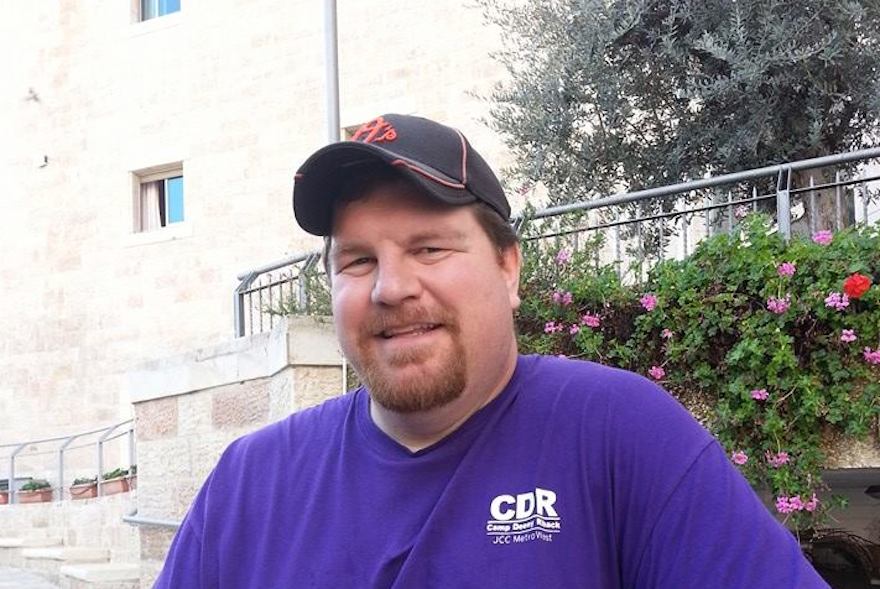 Josh Allen, wearing a shirt from the Jewish day camp where he worked, in Israel in November 2014. (Facebook)
Advertisement

(JTA) — A 37-year-old New Jersey high school teacher and father of a 4-year-old girl died while working at a Jewish day camp.

The cause of death was not reported.

Allen, who was Jewish, taught math at Golda Och Academy, a Conservative Jewish day school in South Orange, from 2012 to 2015, leaving to become a math teacher at the Link Community Charter School in Newark. According to his bio on the Link website, Allen began teaching through the New York City Teaching Fellows and taught for six years in East Harlem before moving to New Jersey.

He was buried on June 27 in Union, New Jersey. Along with his daughter, Rachel, he is survived by his wife, Jamie.

Adam Shapiro, head of Golda Och Academy, told the Jewish News that Allen was a “larger-than-life guy with a heart as big as gold who cared deeply about his friends, his family and his students.”

“As a teacher he always went above and beyond. He cared so deeply about educating the next generation of Jewish leaders.”

Allen, added Shapiro, “worked with the kids not just on their math skills but in many different ways. While he taught at the high school level, he also spent afterschool time with the math enrichment program at our middle and lower schools, and when you walked into his classroom, the energy in the room was palpable.”

Before teaching at Golda Och, Allen worked as a curriculum writer at the Institute of Southern Jewish Life in Jackson, Mississippi, writing third- and fourth-grade curricula for Hebrew schools in dozens of communities in the South. He also worked in 2000-2001 as a Jewish Campus Service Corps fellow at the Hillel of Florida State University.

On his LinkedIn profile, Allen described himself as a “dedicated math teacher who loves teaching middle-school aged students … My favorite moments as a teacher is when the first, second and third attempts to reach a student and teach them something fail, but with the fourth different try, they exclaim, ‘Oh! Why didn’t you teach it like this in the first place?’’’