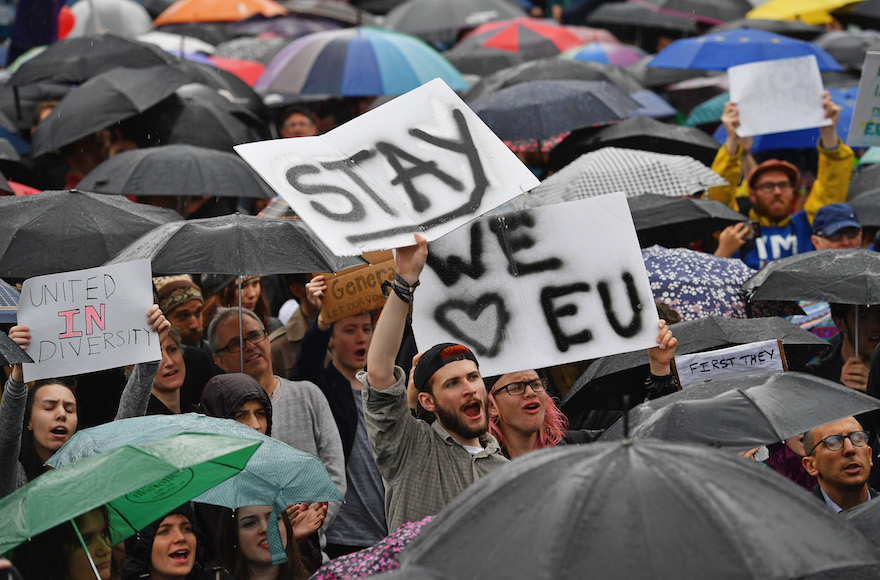 (JTA) — Twice as many British Jews voted to remain in the European Union than those who backed the “Brexit,” according to a new survey.

Conducted by the Survation polling firm earlier this week for The Jewish Chronicle, the opinion poll of  1,000 British Jews showed that 59 percent were displeased by last week’s narrow vote to leave the EU, compared to 28.3 percent of respondents who were pleased with the result.

Surveyed after the vote, 59 percent of respondents said they voted Remain, with 31 percent voting Leave. Six percent did not vote, they said.

Of those who voted for a British exit, or Brexit, 11 percent said they now regret their decision.

A similar poll conducted ahead of the vote showed a 50-50 split.

As a result of the June 23 referendum, 38 percent of Jews indicated they felt less safe, compared to 42 percent who said they did not feel any decrease in their level of security.

Xenophobic hate speech saw an uptick in Britain following the vote, with dozens of cases involving nationalistic rhetoric observed within days of the vote. But the Community Security Trust, the Jewish community’s watchdog on anti-Semitism, said none of the reported incidents show a direct link to anti-Semitism.