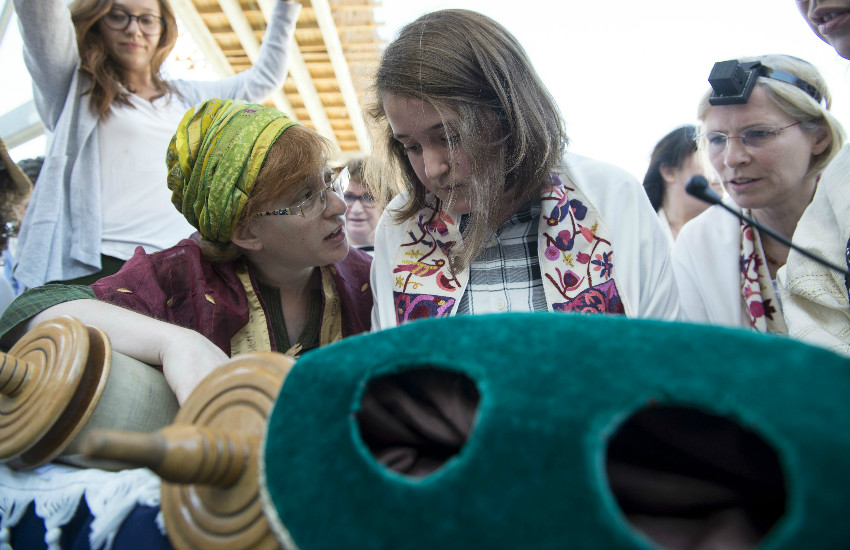 Frannie Werner of Milwaukee celebrates her bat mitzvah at the Western Wall using a Torah scroll smuggled into the women's section on July 7, 2016. (Photo courtesy of Women of the Wall)
Advertisement

JERUSALEM (JTA) — The Women of the Wall group secreted a Torah scroll into the women’s section of the Western Wall in order to hold a bat mitzvah ceremony during its monthly Rosh Chodesh service.

One Torah scroll was confiscated at the security entrance to the Western Wall on Thursday morning, but a second was covertly brought in, the Women of the Wall said in a statement.

Frannie Werner of Milwaukee had an aliyah to the Torah during the service in celebration of her bat mitzvah, according to the group.

“Rabbi [Shmuel] Rabinowitz banned one of our Torah scrolls from the Kotel today and we brought in another one,” Anat Hoffman, chair of Women of the Wall, said in the statement, referring to the rabbi of the Western Wall. “If he bans two Torah scrolls next month, we will bring 10. You cannot stand in between women and our connection to the Torah.”

Some 300 women participated in the service and 100 men were supporting them from the other side of the partition between the sides, according to the group.

Haredi Orthodox protesters spit on the women and shouted epithets and blew whistles to disrupt the service, Women of the Wall said, and one protester publicly destroyed one of the group’s prayer books as police stood by.

Also Thursday, Conservative and Reform Jews held an egalitarian service at the Western Wall plaza, despite an order issued the previous day by the attorney general denying them permission to pray together at the plaza because it is not a designated area for prayer. The southern portion of the Western Wall, under Robinson’s Arch, is the area set aside for mixed prayer services.

Two other such egalitarian services have been held at the Western Wall Plaza in the last month.

The organizers of the service told The Times of Israel that they did not violate the attorney general’s order since they held a singing and dancing service and did not actually pray. Haaretz reported that the group indeed recited prayers but did not read from the Torah.

In April, the Supreme Court of Israel gave the government an extra three months to present a plan for egalitarian Jewish prayer at the Western Wall. Haredi Orthodox parties have protested any type of allowance for such prayer at the site.

The court’s ruling also declined to issue a temporary order allowing women to use the site’s Torah scrolls in the women’s section in contravention of  orders by Rabinowitz.