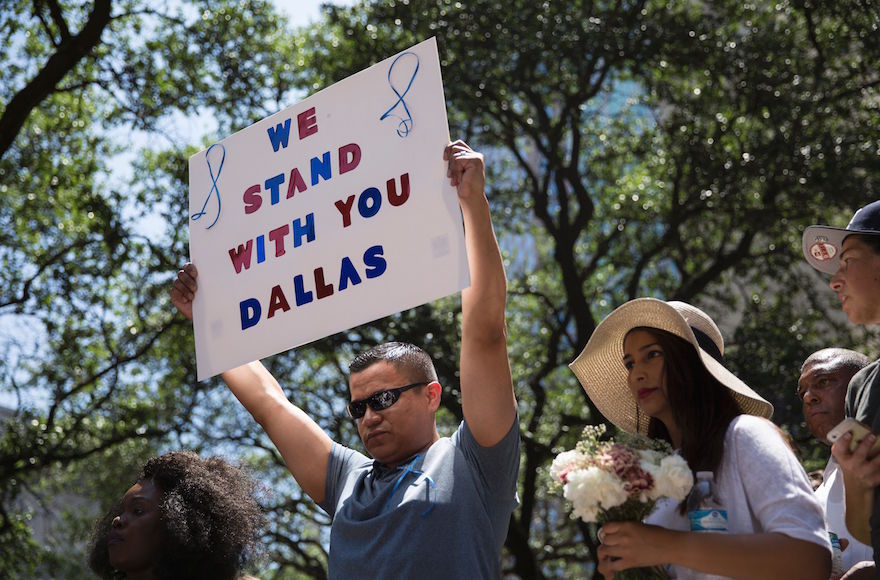 A man holds a sign during a vigil at Thanks-Giving Square in Dallas, Texas, on July 8, 2016, following the shootings during a peaceful protest on July 7 which left 5 police officers dead. (Laura Buckman/AFP/Getty Images)
Advertisement

(JTA) — Jewish organizations are voicing anguish over the violence in Dallas that claimed the lives of five police officers during a peaceful demonstration protesting the recent shooting deaths of two black men by police in Minnesota and Louisiana.

Officials say the police officers were killed by sniper fire during a protest Thursday evening. One suspect, who died during a police standoff following the shooting, has been identified as Micah Xavier Johnson, 25, an Army reservist who served in Afghanistan.

The Dallas Holocaust Museum Center for Education and Tolerance, which is located near where the shootings occurred, had to close Friday as the investigation continued and pathways were cordoned off. The museum’s spokespeople expressed sorrow for the deaths of the police officers and the two African-Americans killed in the week’s earlier incidents.

“We deplore acts of violence and hatred in all forms and urge our community to come together to embrace civil discourse. We value every life,” a museum release read. “We also feel great sorrow for the two shooting victims for whom the peaceful protest was being held and those protesters who were wounded.”

The Anti-Defamation League condemned the killing of the five police officers “in strongest terms.”

“We have reached out to the Dallas Police Department to convey our condolences and offer support,” Roberta Clark, director of ADL’s Dallas regional, said in a statement. “At this early point in the investigation, the motive for this odious attack is unknown and it would be irresponsible to jump to conclusions or cast blame. We must let the investigation run its course.”

“In the aftermath of this attack on law enforcement and the recent police shootings of black men in Minnesota and Louisiana, we appeal to the public to remain calm during this challenging and difficult time,” said Jonathan Greenblatt, the ADL’s CEO. “Violence should never beget violence. Solutions will be found only when we work together peacefully and engage in constructive dialogue.”

The Jewish Council for Public Affairs also condemned “in no uncertain terms” the killings of the five police officers.

But its president, David Bernstein,  also responded to the Dallas incident with a direct call to transform the “adversarial” relationship between communities and law enforcement nationwide.

“Far too many African-Americans, particularly young men, have fallen victim to police violence leaving an indelible mark on communities and families,” Bernstein said. “The spate of horrific police shootings shows that many police departments must undergo serious culture change, and see themselves as not only enforcers of the law but members of the community as well. We have a long way to go as a country.”

The Reform movement provided condolences for all of the week’s victims via the Religious Action Center of Reform Judaism, calling the continued bloodshed a “plague” related to gun violence.

“The tragic events of this week remind us that individual, structural and institutional racism persists in our country, with severe consequences. If one death is a tragedy, so many deaths is a plague,” an RAC statement read.

“As we are stunned by a week of shocking violence, our challenge is to find new ways to relate to each other across lines of difference, and to rebuild the damaged trust between law enforcement and the communities that they serve. For our society to be one of peace, justice, wholeness and compassion, this pattern of violence must end.”