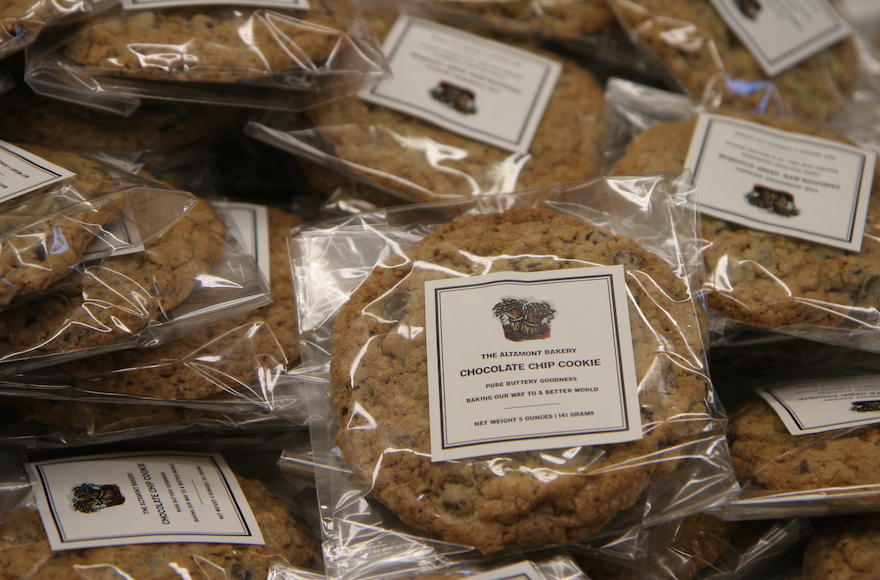 TULSA, Okla. (JTA) – Walk into Congregation B’nai Emunah on any Tuesday afternoon and you’ll barely get through the massive, light-filled foyer before it hits you: an aromatic wave of warm oatmeal and raisins, or perhaps a sweet surge of rich, melting chocolate chips.

What you’re smelling isn’t catered food for a bar mitzvah bash. Rather it’s one of the most highly regarded bakeries in the region, which is also an innovative social justice project that might just be a model for civic-minded synagogues everywhere.

The Altamont Bakery, which operates weekly from the synagogue’s dairy kitchen, is a successful commercial enterprise in which formerly homeless and mentally ill Tulsans work alongside synagogue volunteers. Together they weigh, measure, mix, shape and bake artisanal cookies that have won the admiration of foodies, selling briskly in coffee shops and cafeterias across Oklahoma and beyond.

Yet whether you believe this is the “Greatest Cookie on Planet Earth” (as the label boasts) or merely the best chocolate chip cookie in the city (according to a blind taste test conducted by the Tulsa World newspaper), it’s not the most important thing the Altamont endeavors to create.

“We are baking our way to a better world,” said Rabbi Marc Boone Fitzerman, who has served the Conservative congregation since 1985.

Fitzerman developed the idea for the bakery five years ago in conjunction with the Mental Health Association Oklahoma, which aids those facing mental-health challenges through advocacy, education, research, service and housing, and the Housing Faith Alliance, which facilitates connections between faith-based institutions and those in recovery from mental illness.

The core of the baking staff is made up of individuals served by the Mental Health Association, including some who live at the nearby association-run Altamont Apartments, from which the bakery takes its name. They are paid what Fitzerman calls “a dignified wage”— currently as much as $13.75 per hour.

The synagogue volunteers they work beside see this as a meaningful opportunity to effect change in their community while broadening their own horizons. 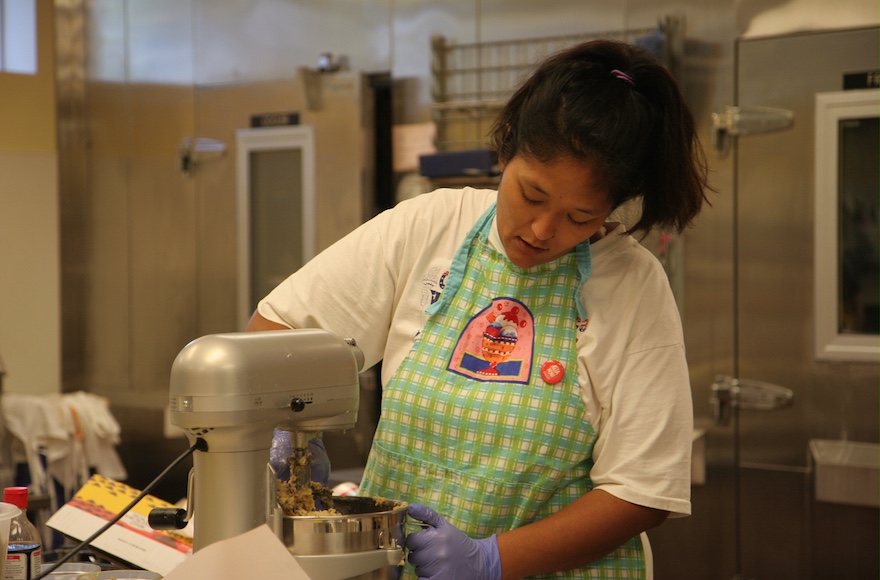 Kimberly Ferry, who had endured years of homelessness and mental health struggles, working at the Altamont Bakery in Tulsa. (Courtesy of Congregation B’nai Emunah)

“I love this collaboration — it’s really unique and powerful,” said Alex Aguilar, a workforce readiness clinical coordinator at the Mental Health Alliance who’s at the bakery every Tuesday. “When we’re able to give someone employment and support — skills and purpose and something to do with their lives — that is the best care that they need.”

Mental health has long been a focus of the synagogue’s volunteer efforts, Fitzerman said, due in part to the significant number of congregants already working in the field.

The rabbi realized he could feed the appetite for social justice work through one of his synagogue’s particular strengths: large-scale baking.

“Like many congregations in frontier outposts, we make everything ourselves — rye bread, rugelach, hamantaschen, apple cake, babka — it’s a very full menu of traditional favorites,” he said.

With Tulsa’s Jewish community numbering about 2,200, the Altamont is the only kosher-certified bakery in town. The synagogue also recently launched a monthly pop-up deli serving house-cured kosher pastrami.

“This is more than dabbling,” Fitzerman declared. “Brooklyn artisans would recognize our seriousness and commitment.”

On a typical Tuesday afternoon, six salaried “Altamonters” and another half-dozen volunteers will produce about 1,200 cookies, which will be bagged, labeled and delivered by another multi-generational cadre of volunteers that meets Wednesday mornings. Unsold leftovers — a rare phenomenon — might wind up at Shabbat kiddish.

Come Christmas and Hanukkah — when orders for 5,000 or more aren’t uncommon — the bakery will more than triple its workforce and production. And next March, when the NCAA Men’s Basketball Tournament returns to Tulsa, demand will likely drive madness in the kitchen, as well.

Nancy Cohen, a former marketing and retail manager who also oversees the synagogue gift shop, is “the presiding genius” of the bakery, Fitzerman says, serving as volunteer director and, until recently, oven master. She is the source of the chocolate-chip cookie recipe that started it all, as well as the two that followed, oatmeal raisin and the newest offering, sweet “sugartops,” with just a hint of lemon. (Incidentally, these are no little noshes, but quarter-pound helpings of richness.)

Cohen is equally passionate about the bakery staff.

“This is our sugar-cookie queen,” Cohen said, introducing Kimberlee Koenig, an Altamonter who was loading the last ingredients into a massive mixer.

“If they’re not perfect, we don’t sell ’em,” Koenig said, detailing her process. “We don’t even put our name on ’em.”

Koenig explains bluntly how much that sense of pride means: “You see, I used to be a street person. Not by choice … but by bad choices, mostly of men.”

Now happily married, she found the bakery two years ago and has only missed work two times — once due to pneumonia, the other following hernia surgery.

Kimberly Ferry has worked in the bakery from its beginning. Cohen remembers that first day — Ferry, following years of homelessness and mental health struggles, had trouble looking her in the eye. Now, between Tuesdays at Altamont and another job at a grocery store, she can afford her own apartment — and to buy her 13-year-old son a new pair of shoes.

“I hadn’t bought him anything in a long time,” Ferry said, lips curling into a smile.

The synagogue volunteers baking alongside the Altamonters say the impact on their lives has also been profound.

“I love it — I love the people we work with,” gushed Jamie Siegel, a mother of four. “It’s the one thing in my week that I really couldn’t give up. I really feel like I’m getting more out of it than I’m giving.”

Dennis Johnson, a retired project manager, was active in a weekly Torah study at the synagogue when he first heard about Altamont. That was a year-and-a-half ago, and he hasn’t missed a Tuesday since.

Since its inception in 2011, the bakery has sold more than 150,000 cookies, at $2 each. The profits cover salaries and supplies; the synagogue underwrites the use of the kitchen and Fitzerman raises outside funds to replace equipment and make capital improvements. Anonymous donors furnished two new high-end ovens that can bake up to 220 cookies in 14 minutes. 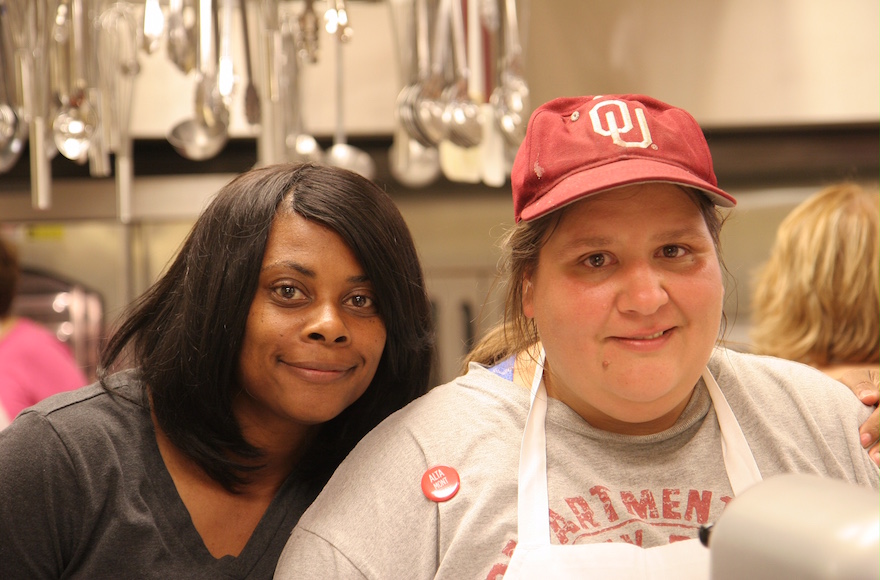 Karra Beck, left, works at Altamont every week, and Mary Nixon is a former employee. (Courtesy of Congregation B’nai Emunah)

For the second consecutive year, the Altamont has been recognized by Slingshot, a fund that supports and promotes innovative Jewish initiatives across the country.

“This type of collaborative endeavor serves as a model for successful partnerships between religious institutions and government agencies,” the evaluation reads, “and shows how the repurposing of synagogue assets can impact an entire community.”

The Altamont Bakery hopes to see its impact grow both in Tulsa, by increasing sales and adding more shifts and workers as the kitchen schedule allows — B’nai Emunah’s 150-student preschool also uses the kitchen — and beyond. Synagogue administrator Betty Lehman said she recently fielded a call from a congregation in Indiana that was interested in launching its own program.

Even the product line is expanding. Cohen has been furiously fine-tuning a “centennial cookie” to be introduced this year, celebrating the synagogue’s 100th anniversary. After testing nearly 20 formulas, she’ll reveal only that it will likely be a version of “double fudge.”

Fitzerman is thrilled, but cautions his model is not easy magic.

“In our initial flood of arrogant do-gooderism, we felt that we would be able to change the lives of our bakers,” the rabbi said. “We’ve held some of them in this project for four consecutive years, but many more have moved through the kitchen for a short period and then wander on to other things.

“We understand that we will fail as often as we succeed. Our goal is to do as much as we can without expecting miraculous transformation.”

Yet for bakers like Koenig, the change is evident. Through the bakery, she has developed confidence and strong friendships, broadened her social network and gotten her foot in the door at a local supermarket, where she now also earns a wage as a cashier and bagger.

But working in the “cookie factory,” Koenig said, is still “the best job.”

“I’ve been very fortunate — God has blessed me,” she added, as the mixer began to whir. “And the cookies are amazing.”