In Little Rock, a woman finds her true faith and then Jewish family 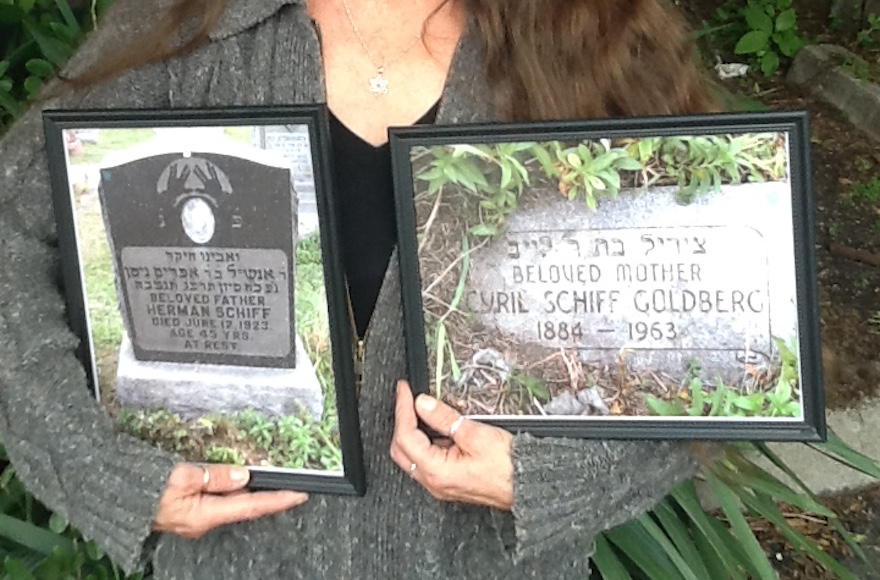 Danette Devlin holding photos of the gravestones of her great-grandparents Herman and Cyril Schiff, attesting to her Jewish roots. (Courtesy of Danette Devlin)
Advertisement

(JTA) –  Discovering a Jewish past of which she was wholly unaware, Danette Devlin of Little Rock, Arkansas, has also found family.

Devlin was raised without any religious affiliation. As an adult she attended Catholic and Episcopalian churches seeking a spiritual home.

“There were lots of nice people, they were very welcoming, but it just wasn’t right. It wasn’t me,” she said.

In 2013, Devlin went online in an effort to find her father, Edward Couch, with whom she’d been out of touch for more than three decades. Devlin found an obituary for Couch’s brother, Robert, that mentioned her late paternal grandmother, Lillian Schiff.

Devlin obtained Schiff’s application for a Social Security number listing the names of Schiff’s father and mother, Herman and Cyril. Searching cemetery websites, Devlin last year acquired photographs of her great-grandparents’ graves near Chicago. The tombstones had Hebrew lettering, confirming the couple’s Jewishness and revealing Herman as a Kohen, a member of the priestly class.

“I jumped up and down with joy!” she said by telephone from her home. “I am Jewish, and I finally felt whole.”

Last summer she visited a synagogue for the first time. She attended prayer services, including for Yom Kippur, and enrolled in classes at Congregation B’nai Israel in Little Rock. She has bought books on such topics as Jewish holidays and Jewish prayers. 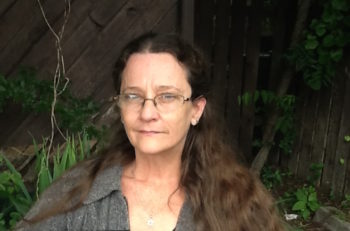 Danette Devlin upon discovering her Jewish ancestry: “I jumped up and down with joy!” (Courtesy of Devlin)

“I cried. I felt so much a part of the whole thing. It just melted into me. I was home,” Devlin said of the first time she worshipped at the Reform synagogue.

Devlin plans to take her three local grandchildren there – to get them “back on track [to] where we belong, who we are, being Jewish, following the Torah,” she said.

In fact, Devlin intends to convert to Judaism. That’s fine with her husband, Nick, a native of Edinburgh, Scotland, who practices Zen Buddhism. It’s OK, too, with the couple’s daughter Danyel Gabel, the mother of the three grandchildren.

“I think it’s wonderful that they can learn about their roots and the things lost with time,” Gabel said. “I’m all for it. For them to be able to broaden their horizons and know where they come from is important.”

Said Devlin: “There’s a feeling of contentment, peace, joy and fulfillment – and of being home. The blood calls – the blood of my people, my Jewish roots.”

She added: “I get goosebumps saying it because it just completes me. I didn’t know who I was, aside from not knowing my family.”

Now she has more family: Devlin located some Jewish cousins, Harvey and Helen Schiff, living near Los Angeles. They confirmed her discoveries and told Devlin that Lillian Schiff, whom she had met only once and who was known as Dolly, was disowned by her parents for marrying Earl Couch, a non-Jew.

Devlin, Helen Schiff said, was even more helpful as a source of researched information about Lillian’s parents, who had reached America in 1901.

The initial phone call from Devlin “was such a complete surprise because we didn’t even know she existed,” Helen Schiff told “Seeking Kin.” The two now speak at least once each month.

In researching her family, Devlin joined several Facebook groups on Jewish genealogy, including the one for “Seeking Kin.” Our exchange of messages revealed the happy discovery of her roots.

Gabel had a childhood friend who made a religious impact – a Jewish girl named Simi Truzman whose father was the rabbi of Little Rock’s Orthodox synagogue.

“I enjoyed seeing how their family operated: praying, eating certain foods on holidays, she and her mother wearing only skirts,” Gabel said.

As to her shared Jewish ancestry with Simi, Gabel said, “I never would have guessed.”

Harvey Schiff has filled in much missing information about Devlin’s father, his first cousin, with whom he grew up in Chicago. Devlin’s great-grandparents and their four children settled there after stays in Canada and New York following their immigration from Poland by way of England.

Now that the extended family is back in touch, and she is exploring her own roots, Devlin said, “It’s not going to happen again that we’ll lose our Jewishness.”

She’s made the connection overt. Devlin wears a Star of David necklace and a matching ring.

“I want everyone to know,” she said. “I’m proud and I’m content. God and I have gotten a lot closer.”

Devlin has yet to find her father. Edward Couch would be about 8o now.