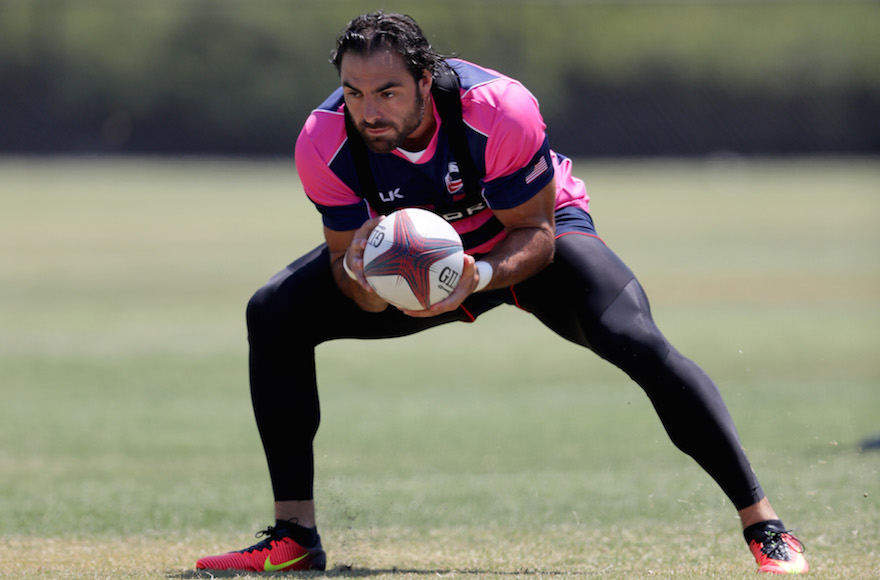 (JTA) — Nate Ebner of the New England Patriots has qualified for the U.S. Olympic men’s rugby sevens team competing next month at the Rio Olympics, becoming the only NFL player to make a U.S. Olympic team.

Ebner, 27, who is Jewish, was included on the 12-man roster released Monday by USA Rugby. Joining Ebner on the squad is another Jewish player —  Zack Test, 26, of Northern California.

According to ESPN, Ebner took a leave of absence from the Patriots in May to train and attempt to make the Olympic team. He will rejoin the Patriots — Ebner is a safety and special teams standout — following the Olympic rugby tournament from Aug. 6 to 11.

The Ohio native was the youngest player ever to make the U.S. men’s sevens team when he joined the squad at 17. He went on to become an All-America rugby player at Ohio State University before joining the school’s football team and being drafted by the Patriots in the sixth round of the 2012 NFL draft.

Ebner’s father, Jeff, was the Sunday school principal of Temple Sholom in Springfield, Ohio. In 2008, he was killed at 53 by a man who beat him while attempting to rob his auto reclamation shop.

“He taught me the importance of being Jewish,” Ebner told the Jewish Journal of Massachusetts last year. “My dad stressed finishing strong in every task I did and conduct myself always in a proper manner.

Speaking of his grandparents, he added: “They make sure I keep up with Jewish events and that I remember my origins.”

On the Patriots, Ebner is teammates with Julian Edelman, whose father is Jewish and who reportedly has been getting in touch with his Jewish side over the past several years.

Test, who attended the Ronald C. Wornick Day School in Foster City, California, has been a member of the U.S. sevens team since 2009. He played in the Maccabiah Games in Israel.

Rugby sevens is a fast-paced version of the sport featuring teams of seven players playing seven-minute halves — as opposed to the normal 15 players and 40-minute halves. This year marks its Olympic debut.