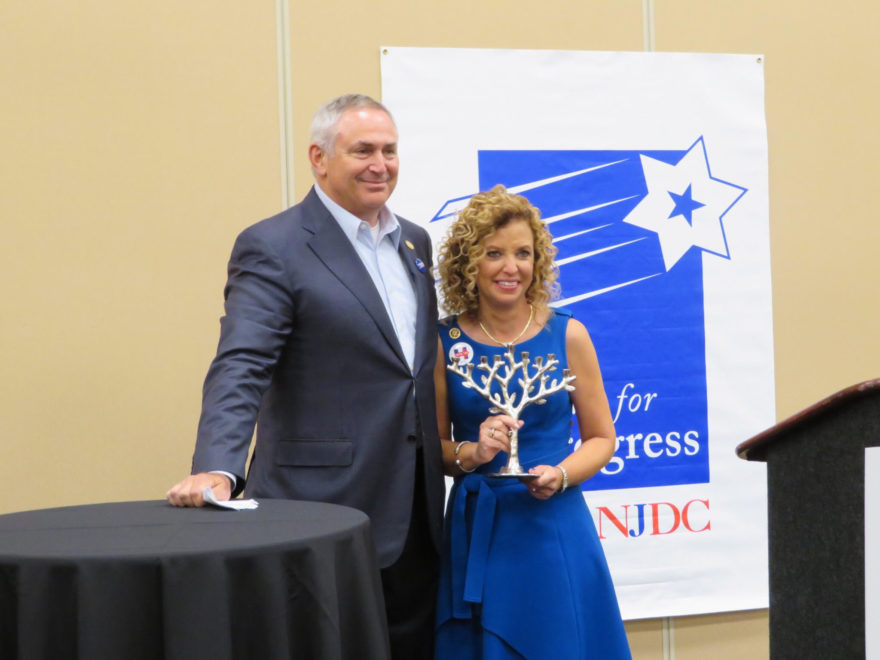 Wasserman Schultz was speaking at an event at the Democratic National Convention in Philadelphia hosted by the National Jewish Democratic Council, or NJDC, where she was presented with an award.

Trump had made his comment after government officials suggested that Russians hacked the DNC’s email server, leading to a leak of its emails showing favoritism to Clinton, the Democratic presidential nominee, during the primary season. Trump has said he was being sarcastic. Wasserman Schultz resigned her position on Sunday as a result of the leaks.

The NJDC crowd greeted her with cheers, and she sounded defiant and struck a Jewish note in addressing the email scandal.

“I might not always win the day,” she said. “I might not convince everybody that I’m right. But you can be damn sure I’m never gonna lose because I’ve been outworked. That is a hallmark of our people. We persevere. We stay focused. We stay together. We lock arms. And we never forget where we came from.”

Wasserman Schultz added: “This has been a difficult week, no question about it,” but that “sometimes you just have to take one for the team, and that’s OK. It’s OK.”

The morning after her resignation Wasserman Schultz, a Florida congresswoman who is locked in a tough primary battle to retain her seat, spoke at a breakfast hosted by the Florida delegation to the convention and was booed. But in her speech at the Jewish Democratic event, she said she would “go home and win my primary,” which was greeted with loud cheers.