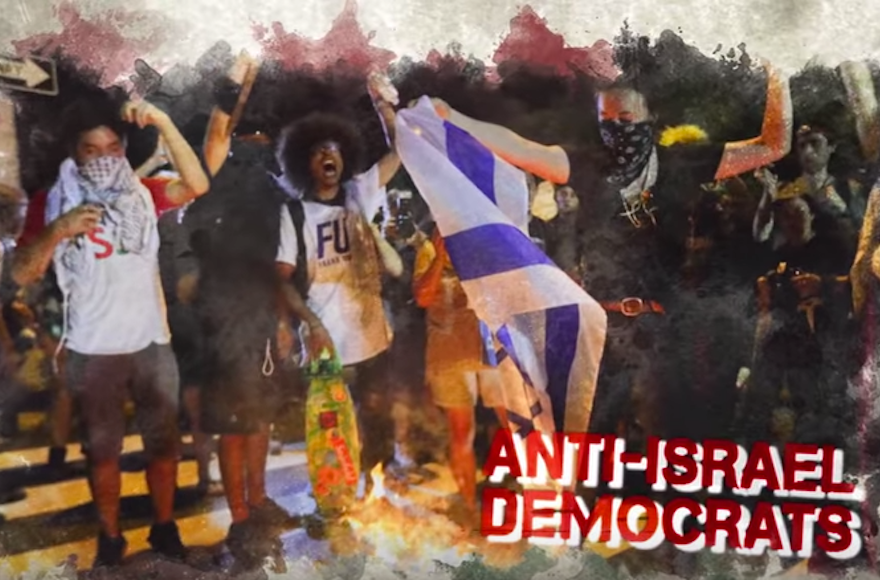 The Republican Jewish Coalition has a new ad out calling Democrats anti-Israel. (Screenshot from YouTube)
Advertisement

A couple of weeks ago, the Associated Press encountered a “handful” of out-and-proud white supremacists credentialed for the Republican convention.

The reporter asked Sean Spicer, the spokesman for the Republican National Committee, to explain. Here’s what he said, per the AP:

Convention organizers release credentials in large blocks to state delegations, special guests and media outlets. Officials have little control over where they end up, he said, noting that even protesters from the liberal group Code Pink managed to get into the convention hall.

“People get tickets through various means, including the media,” Spicer said. “In no way, shape or form would we ever sanction any group or individual that espoused those views.”

Right. Conventions are diffuse, borderline chaotic affairs. Saying the views and actions of a handful of folks are emblematic of the entire party would be fundamentally unfair, you’d think.

You’d think, but not so much the Republican Jewish Coalition, which in an online ad it released last week arguing that the Democratic Party has been taken over by anti-Israel forces advances a definition of Democrat so loose as to be meaningless.

Included in the ad as emblematic of “today’s Democratic Party,” as the narrator puts it, are a group of masked folks burning a flag outside the convention.

“While the Palestinian flag was displayed inside the Democratic convention, the Israeli flag was burned right outside,” the narrator says.

Unlike the white supremacists in Cleveland, the flag burners are not credentialed – they are outside the convention, protesting what’s going on inside. It’s like blaming Hubert Humphrey for Abbie Hoffman. Notably, nominee Hillary Clinton’s campaign condemned the flag burning. (The Palestinian flag inside the arena was unveiled for a brief moment and appeared to be the work of a handful of people.)

The man and the woman who speak in the ad condemning U.S. support for Israel are not credentialed, and appear outdoors – not inside the arena.

“Anti-Israel Democrats are all around Philadelphia,” the narrator says, without explaining how we know that the speakers are Democrats (there were plenty of Greens in Philadelphia).

The ad also implies that the very presence in the city of anti-Israel protesters indicts the entire party. In addition to the white supremacists in Cleveland, there were – as Spicer noted – Code Pink protesters inside and outside the arena. Does that render the Republican Party an amalgam of the Ku Klux Klan and the Yippies?

Johnson issued a non-apology, and his defenders have said he was referring to the “settlement enterprise” and not settlers, although that is not clear from his remarks: “There has been a steady, almost like termites can get into a residence and eat it up before you know that you’ve been eaten up and you fall in on yourself, there has been settlement activity that has marched forward with impunity.”

Johnson, however, spoke off-campus, at an event sponsored b the US Campaign to End the Israeli Occupation and the American Friends Service Committee, not the DNC. Every mention of Israel from the convention stage was positive, including the one in Clinton’s acceptance speech. (You wouldn’t know this from Clinton’s only appearance in the ad, at its end, with a shot of her smirking.)

Still, trends we observed reporting the conventions suggested differences between the parties.

There were plenty of “I support Palestinian human rights” stickers and banners at the Democratic convention. Mentions of Israel at both convention stages were positive, but at the GOP convention, they were more frequent and more robust. Both parties had pro-Israel platforms, but the Republican language was approved unanimously, while there was a debate among Democrats over whether to refer critically to Israel’s occupation of the West Bank. (The proposal was rejected.)

An ad mentioning those actual facts, and others, would have made a strong case that the Republican Party unambiguously supports Israel’s current government, while Democrats have a more contentious relationship with it. The RJC ad, relying on hyperbole and distortions, doesn’t make that case.