To name or not to name: Jewish organizations grapple with the Trump question 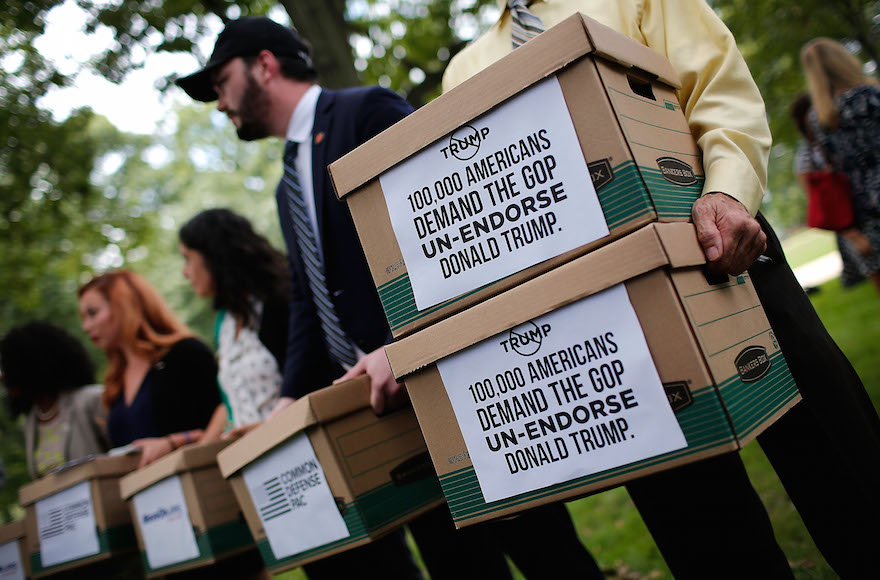 WASHINGTON (JTA) — “This condemnation is against you personally,” the Jewish War Veterans said earlier this week, concluding its message to Donald Trump. “You, Mr. Trump, deserve our contempt.”

If the sign-off to the statement condemning the Republican nominee for his attacks on the Muslim parents of a soldier killed in action was cuttingly personal, it was also necessarily personal.

“JWV is an apolitical organization,” the group said in the same statement. “We do not support or oppose candidates or parties.”

The veterans’ statement encapsulated a dilemma faced by Jewish organizations as they brace for the November election: Many of Trump’s remarks, mouthed by just about anyone else, would draw an immediate rebuke from Jewish groups founded on principles of protecting the vulnerable from ridicule and discrimination.

But he is also the nominee for one of the two major parties, and tax laws prevent nonprofits from endorsing or opposing a presidential candidate. (Trump, notably, believes the tax laws are a bar to free speech and wants to repeal them.)

It’s a fine line that Jewish groups are straddling in different ways. Some criticize the rhetoric, without mentioning the speaker. Others name Trump, but, like the Jewish War Veterans, go to lengths to make it clear that they are not taking a position on whether he should be elected.

Hillary Clinton’s campaign has taken notice, and sees the statements as validating its case within the Jewish community.

“At the Jewish organizational level, major leaders who do not usually speak out during campaigns have stood up,” Sarah Bard, the Democratic nominee’s Jewish outreach director, said last week during the Democratic National Convention in Philadelphia.

The Trump campaign did not return a request for comment.

In addition to Jewish War Veterans, the Anti-Defamation League and the Reform movement have named Trump – the ADL by far the most frequently.

Among other instances of naming Trump, the civil rights group called out Trump’s “hate speech” against immigrants in July of 2015, said his plan to bar Muslims from entering the country was “deeply offensive” in December of 2015, called on Trump to distance himself from white supremacists in February, in March gave away $56,000 in donations Trump had made to the group, criticized Trump’s “America First” slogan in April and in July of this year called on the nominee to reject the support of racists.

Jonathan Greenblatt, the group’s CEO, noted to JTA that the group had called out other candidates by name, including Sen. Bernie Sanders of Vermont, the contender for the Democratic nomination who inflated the number of Palestinian civilians killed during Israel’s 2014 war in the Gaza Strip.

“We’re going to do what we do, because it’s the right thing to do,” said Greenblatt, who prior to helming the ADL worked in the Obama White House directing partnerships with social media enterprises.

The ADL may have more leeway because Trump’s perceived offenses violate its raison d’etre: He is seen as defaming minorities, and it is, after all, a league against defamation.

“Of late, we’ve found ourselves indeed calling out instances of bigotry on the campaign, like for example when Donald Trump described Mexicans coming over the border en masse as rapists and murderers, and then when he talked about closing the border to all Muslims, we spoke out about these things because, again, bigotry in all forms, whether it’s directed against Latinos or immigrants or Muslims or refugees, we find it reprehensible,” Greenblatt said.

Rabbi Jonah Pesner, the director of the Reform movement’s Religious Action Center, said the movement was usually careful not to name candidates in its statements, except when what a candidate says “is clearly in violation of a value” it holds dear.

That was in the case in March when the movement wrote Trump asking for a meeting to discuss instances in which he or his surrogates had disparaged Mexicans, Muslims, women, Jews and one occasion in which he appeared to condone violence against protesters.

Pesner told JTA the letter was carefully crafted to focus on instances of Trump’s offensive speech rather than the overall prospect of Trump as a president.

“We reminded our audiences we never speak about candidates and we were neither endorsing nor rejecting Mr. Trump’s candidacy,” he said. “We wrote the letter with footnotes so we could be completely appropriate so we weren’t talking about his candidacy but what he had said.”

Bend the Arc, a Jewish social justice group, targets Trump through its affiliated political action committee; tax rules for PAC endorsements are much looser than for nonprofits.

Other Jewish organizations have taken care not to name Trump.

The Orthodox Union, opposing Trump’s Muslim ban proposal last December, did not name him. The American Jewish Committee, in a March statement released after Trump appeared to condone violence against protesters, said in a statement that “The political season is a long one, and in the heat of the moment, candidates and their supporters say and do things they do not mean or which they phrase carelessly.” Not mentioned was that Trump was the only candidate to have made such calls. David Harris, the AJC director, was unavailable for comment.

On Aug. 3, the Jewish Council for Public Affairs, the umbrella body for Jewish community relations councils, released a statement that urged civility from all sides and praised the Democratic party for including a similar appeal in its platform – but, despite decrying “hostile, acrimonious, and demeaning rhetoric,” did not name its most notorious purveyor, Trump.

David Bernstein, the JCPA’s president said if other organizations wanted to be “less risk averse,” that was their choice.

“For an organization committed to promoting a more tolerant society, we’re willing to speak publicly when it comes to crossing a line,” he said. “That doesn’t mean we’re not going to exercise judiciousness.”