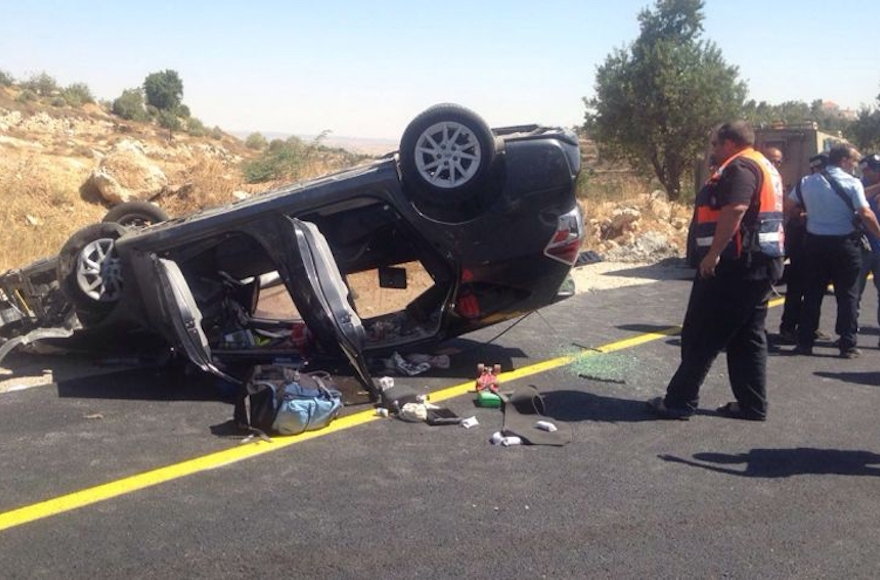 An officer examining scene of an attack on a family car near Hebron in Israel's West Bank, July 1, 2016. (Judea and Samaria Rescue Services)
Advertisement

JERUSALEM (JTA) — A Palestinian husband and wife who helped a Jewish family following a deadly terrorist attack in July are looking for work in Israel after being fired for assisting Jews.

Yochai Damari, the head of the Har Hebron Regional Council, in a Facebook post Sunday called on the Defense Ministry to procure work permits in Israel for the couple, who are medical professionals. Damari said he sent a letter to Defense Minister Avigdor Liberman requesting the permits.

The post did not say where they were working or who was behind the firing.

Rabbi Miki Mark, a father of 10, was killed in the July 1 terror attack near Hebron. A car with Palestinian license plates overtook the Marks’ vehicle and opened fire with automatic weapons, causing the car to flip over.

His wife, Chava, was seriously injured and had major brain surgery on Sunday.

Immediately following the shooting, the Palestinian couple pulled the teenage children and their mother from the car and gave them emergency treatment until ambulances arrived and took them to the hospital. They continued to help the family and protect them from Palestinian passers-by who threatened them and called on the couple to stop assisting them, Damari said.

Damari said he met with the couple, who asked him for help in obtaining work in Israel.

“I am aware of the difficulties, but I think that in cases like this it is our obligation as the Jewish nation to show our thanks to people who behave as upstanding people and act in a way expected of them in situations like this,” Damari said.