In courting Kissinger, does Hillary Clinton risk losing the left? 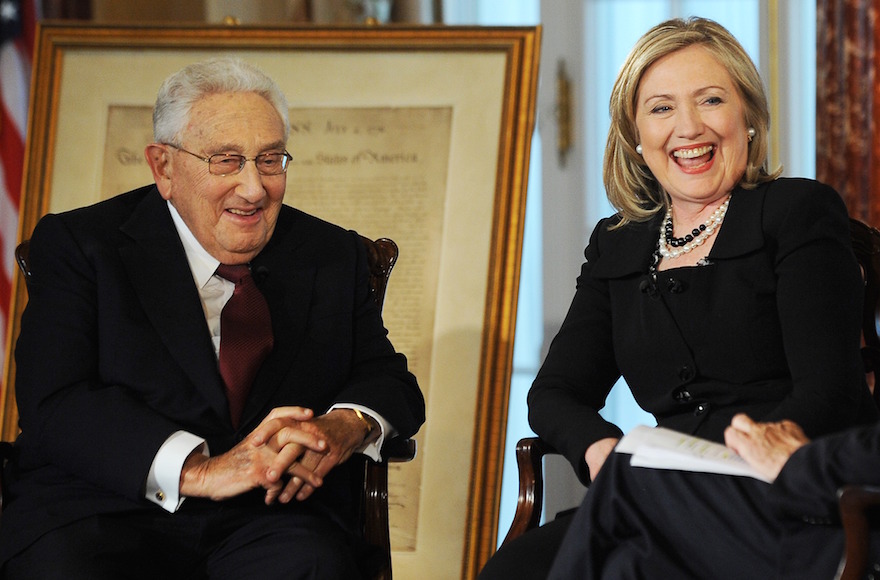 WASHINGTON (JTA) – If Hillary Clinton is indeed courting Henry Kissinger, what happens to her relationship with Bernie Sanders?

Reports that the Democratic presidential nominee is actively pursuing endorsements from Kissinger, who like her is a former secretary of state, and other former Republican officials have raised alarms on the left.

It also has provided an opportunity for Donald Trump, the Republican nominee, who has lumped his Republican critics with Clinton as part of an elite that has led the United States into disastrous wars.

The question is whether a Kissinger endorsement shatters the fragile coalition that Clinton has forged post-Democratic convention with her erstwhile rival Sanders and his backers.

Politico reported Monday that Clinton’s campaign had “sent out feelers” to Kissinger and other Republican Party elders who have yet to endorse Trump.

Clinton hopes to seize on Republican disaffection with a candidate who has questioned the need for a range of longstanding alliances and appears to have friendly relations with Vladimir Putin, the president of Russia and a formidable U.S. adversary.

“We are convinced that he would be a dangerous president and would put at risk our country’s national security and well-being,” said a statement issued this week by dozens of Republicans who have served in diplomatic and national security posts in previous administrations, and first reported by The New York Times.

Getting Kissinger’s kiss, though, could be poisonous for Clinton. Despite his elder statesman aura, Kissinger’s role during the Nixon and Ford administrations orchestrating bombing campaigns in Southeast Asia and backing fascists in Latin America makes him anathema on the left.

“The Clinton campaign’s fetish for Henry Kissinger is getting out of hand,” the New Republic said, referring to the Politico article.

“If Hillary Clinton Seeks (or Accepts) an Endorsement from Henry Kissinger, She’s Lost My Vote,” wrote Charles Pierce, an influential Esquire columnist who during the primaries defended Clinton against attacks from Sanders backers.

Spokespeople for Sanders, an Independent senator from Vermont and the first Jewish candidate to win major party nominating contests, did not return requests for comment. JTA reached out to the Sanders campaign as well as his Senate office.

Matt Duss, the president of the Foundation for Middle East Peace, who was invited by the Sanders campaign to speak to the party’s platform drafting committee, said the concerns are that Clinton could represent a resurrection of policies that President Barack Obama, an opponent of the Iraq War, helped marginalize with his 2008 election.

“I think a lot of progressives understand the need to build as broad a coalition as possible to avert the disaster of a Trump presidency,” Duss said. “But there are concerns that Clinton is seeking the endorsement of a whole group of people whose ideas have proven quite disastrous for American foreign policy.”

David Makovsky, a fellow at the Washington Institute for Near East Policy, said Kissinger’s perceived misadventures took place too far in the past to have an impact should Clinton gain his endorsement.

“Kissinger has emerged as America’s quintessential grand thinker,” he said. “It’s not unusual she would solicit his support.”

In addition to Kissinger, Politico reported that Clinton, who was secretary of state during Obama’s first term and has the endorsement of her only living Democratic predecessor, Madeleine Albright, also was seeking the thumbs-up from the other living Republican secretaries of state, including James Baker (President George H.W. Bush), George Shultz (President Ronald Reagan) and Condoleezza Rice (President George W. Bush).

Aaron David Miller, a former Middle East negotiator who worked for Baker and Albright, among others, said such a collective endorsement could help move the needle further for Clinton, who is leading Trump in the polls, particularly if it was timed for September, when voters tend to pay closer attention to endorsements.

“Against the backdrop of a Trump campaign that has failed miserably to demonstrate its competency in foreign policy because it’s trotted out people who are virtually unknown, establishing endorsements from people who held the job, it provides her with an edge,” said Miller, now vice president at the Wilson Center, a congressionally chartered international affairs think tank. “An edge, not a big edge.”

Clinton’s pursuit of support from the hawkish foreign policy community is not just a post-convention phenomenon.

Kissinger was the subject of a tense debate moment between Sanders and Clinton during the primaries after she had said in an earlier debate that she would ask Kissinger for advice.

“I happen to believe that Henry Kissinger was one of the most destructive secretaries of state in this country,” Sanders said in the February debate. “I am proud to say Henry Kissinger is not my friend, I will not take advice from Henry Kissinger.”

Clinton said she did not agree with Kissinger on every issue, but noted his role in easing the Cold War with China as one she believed others should emulate.

“His opening up China and his ongoing relationships with the leaders of China is an incredibly useful relationship for the United States of America,” she said. “It’s a big complicated world out there.”

Rep. Eliot Engel, D-N.Y., the senior Democrat on the U.S. House of Representatives Foreign Affairs Committee, said the overarching requirement to keep Trump from the presidency because of his foreign policy views should override political considerations.

Trump, like Clinton, has met with and solicited the support of Kissinger. But Trump also has taken aim at the growing number of Republicans who have said they will not vote for him by joining them with Clinton and blaming the lot for what he says is the perilous state of world affairs.

That was the tone of his campaign’s reaction to the statement from the dozens of national security Republicans repudiating his campaign.

“The names on this letter are the ones the American people should look to for answers on why the world is a mess, and we thank them for coming forward so everyone in the country knows who deserves the blame for making the world such a dangerous place,” the Trump campaign said. “They are nothing more than the failed Washington elite looking to hold onto their power, and it’s time they are held accountable for their actions.”

The campaign did not reply to a request for further comment.

Aaron Keyak, a Democratic strategist who through his firm, Bluelight Strategies, advises Jewish groups, said younger voters who had little memory of Kissinger’s sins would likely be more impressed by the defection of Republicans.

“Elections are not won on [the] far left or far right, they’re won in the center, and the persuadable voters in Colorado, Florida and Pennsylvania are not Bernie voters,” he said, referring to swing states.

In any case, Keyak said, Sanders backers were moved more by progressive domestic policies, including a higher minimum wage and restricting campaign finance.

“A lot of those Bernie people have to do with economic issues, jobs, where Hillary adopted a lot of that language,” he said.