To heal divisions among the Jewish people, divide the land 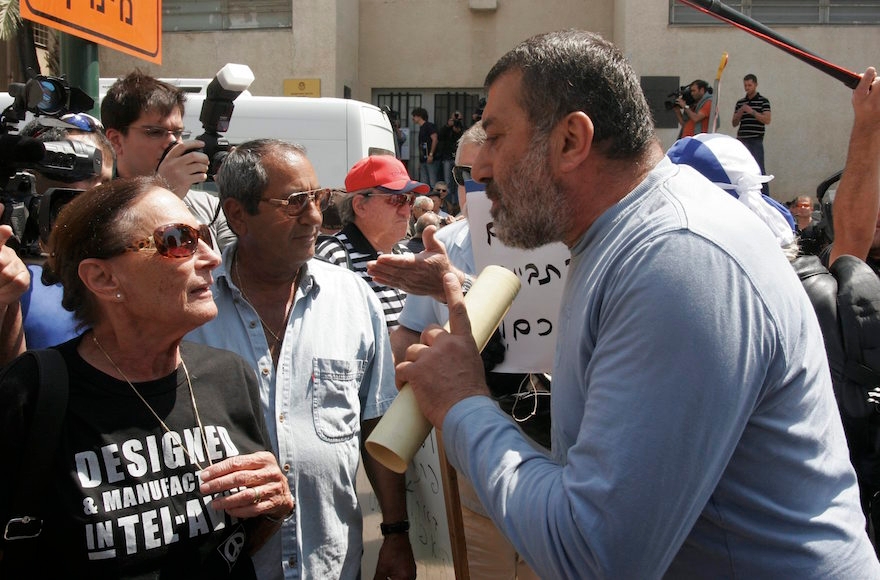 (JTA) — “If there is something that deprives me of sleep it is the fissures in Israeli society,” former Defense Minister Moshe Yaalon declared, just after he resigned in May. That same day Ehud Barak, who preceded Yaalon as Prime Minister Benjamin Netanyahu’s defense minister from 2009 to 2013, accused Netanyahu of embracing a “divide and rule” approach.

The deepening divisions in Israel called out by its two most recent defense ministers are also reflected in America. They were on display at the Republican and Democratic conventions during intense debates over platform language concerning the Israeli-Palestinian conflict.

These schisms are growing both within and between the Jewish communities of Israel and the United States, which comprise more than 80 percent of the world’s 14 million Jews in roughly equal numbers. They pose critical barriers to ever achieving the kind of Jewish unity necessary to attain and sustain a two-state solution. And that outcome is critical to Israel remaining both Jewish and democratic, as well as to its long-term security, which is why the two-state solution should be supported by any American candidate claiming to be “pro-Israel.”

That is also why healing these fractures in both communities is an imperative.

In Israel, the primary task is ensuring security to the democratic nation-state of the Jewish people based on universal and Jewish core values. The West Bank settlements and occupation pose existential questions concerning the country’s security, the unraveling of its social fabric, its intensifying tribalization and the nature of the state altogether. As Israel has moved to the right politically, Israeli nationalism – with an increasing emphasis on the state’s Jewish character – is on the rise. Israeli Jewish society is becoming less committed to liberal democratic values and more polarized and hate-driven, with zero tolerance for diverging opinions and perceptions, including those of the outside world.

In America, the most fundamental challenge relates to identity and continuity. Most American Jews are politically liberal. Nearly 70 percent voted for President Obama in 2012 and a majority supported the Iran nuclear deal, notwithstanding the fervent — and divisive — opposition of Netanyahu and AIPAC.

American Jews are, in general, neither very observant religiously nor very knowledgeable about their Jewish heritage. For many, including the not religiously observant, an emotional commitment to Israel’s survival as a Jewish and democratic state has traditionally buttressed their American Jewish identity. As liberals, American Jews (particularly the younger generation) want Israel to be a tolerant, pluralistic, compassionate democracy. A growing number are therefore troubled by Israeli governmental policies toward the Palestinians, settlement expansion and the occupation. A recent survey by the Pew Research Center found that “the share [of millennials] sympathizing with the Palestinians [over Israel] has risen significantly in recent years, from 9% in 2006 to 20% in July 2014 to 27% today.”

Among American Jews, a 44 percent plurality say settlement building hurts Israel’s security, 31 percent say it helps and 27 say it makes no difference, according to Pew.

Any two-state resolution would at some point require displacing and relocating tens of thousands of Jewish settlers. Thus the future of the settlements is the necessary place to start trying to heal the two communities’ fractures, beginning with Israel’s.

We believe that a voluntary halt to expansion of all West Bank settlements that are beyond the security fence is essential. These settlements are unlikely to ever be included in Israel proper if a two-state agreement with a land swap is reached. The status of the settlers outside the large blocks beyond the fence should be negotiated.

Neither of us thinks that would be easy. Consecutive Israeli governments — all uneasy coalitions — have failed when they tried to initiate serious discourse about settlements.

Yet each of us found that through dialogue, even those who profoundly disagree about settlements can discover shared commitments to the future and well-being of the Jewish state.

In 2004 and 2005, the Harvard Negotiation Research Project, which Robert Mnookin led, facilitated two off-the-record, multi-day dialogue sessions that brought together 15 influential Israelis — leaders of the national religious settlement movement, others seeking an end to the occupation and, from the middle, high-ranking retired military and diplomatic personnel.  Our goal was not to reach agreement about settlements. Rather it was to allow participants to explore each other’s perspectives and better understand each other’s needs, fears and interests. They found that they shared many values.

One settler leader said the “united existence of the Jewish people was first and foremost” and more important than the “whole settlement project.” He hoped he would never have to choose between retaining “eretz Yisrael” — the biblical land of Israel that includes the entire West Bank — and dividing the Jewish people. But, he added, “If you ask me what I choose, I choose the Jewish people.”

Gilead Sher, who has participated in high-level negotiations between Israel and the Palestinians, took part in these sessions as well. And starting in 2012, he and other leaders of the Israeli advocacy group Blue White Future, which promotes a two-state solution, have arranged discussions with settler rabbis. Sher vividly recalls one particularly heated  exchange during a three-day, two-night session in a northern kibbutz:

“We carried you on our back for 4,000 years,” the settler rabbis told my colleagues and me, “and you carried us for not even 70. Do not patronize us. We are here to stay and so are our children and grandchildren.”

My group responded, “It is a struggle between two ‘religions,’ your Jewish one and our Jewish-democratic one. We need to find a common language for both. For 2,000 years Judaism prevailed in exile with neither state nor land.”

Later a rabbi asked Sher what he felt upon entering the Camp David compound in July 2000 at the start of negotiations, led by President Bill Clinton, between Yasser Arafat, the Palestinian Authority president, and Ehud Barak, the Israeli prime minister. Sher replied, “Feeling the heavy burden of the responsibility that lies ahead. Hundreds of years of Jewish heritage, history, tradition and longing are reaching a moment of truth in our history, and I have to do my best to contribute my part to the Zionist enterprise.”

The settler rabbis were stunned. Up to that moment they had viewed officials such as Sher, secular Jews, as cynical and barely attached to Jewish values.

By listening to one another, we all learned that while perspectives differed, we shared many interests and values. None of us was asked to abandon core convictions, but we could jointly explore alternative visions of Israel’s future. We now can call one another and discuss any topic.

To be sure, both of us realize that dialogue alone will not produce a breakthrough. But it achieves glimmers of understanding that can form a sorely needed consensus: We must divide the land between the Jordan River and the Mediterranean, not our people.

We must arrive at this consensus. It is a necessary step for reaching a reality of two states, and intra-Jewish dialogue can put us on the path.

Washington can help. After the November elections, President Obama should issue proposed parameters of a permanent two-state agreement, based in large measure on Secretary of State John Kerry’s summary of U.S. insights from the 2013-2014 negotiations, and get them approved as a resolution of the United Nations Security Council. A key and widely accepted component is borders based on the 1967 lines with equitable land swaps to allow Israel to keep the large settlement blocs where 80 percent of the settlers reside.

Drawing a border between the two entities is the indispensable and only way to ensure Israel’s security and its future as a Jewish democracy, preserve the strong bonds between Israel and America, and sustain the vibrancy and continuity of the American Jewish community. For the long-term benefit of both the Jewish people and the State of Israel, we must divide the land, not the Jewish people.

(Robert Mnookin is the Williston Professor of Law at Harvard, where he chairs its Program on Negotiation. As a mediator he has facilitated any number of off-the record meetings related to the Israeli-Palestinian conflict. He is writing a book on negotiating Jewish identity in contemporary America. Gilead Sher, a former Israeli senior peace negotiator who was chief of staff to Prime Minister Ehud Barak, heads the Center for Applied Negotiations at the Institute for National Security Studies INSS in Tel Aviv and is co-chair of Blue White Future, an advocacy group for the two-state solution. Sher authored “The Battle for Home,” a book published in Israel in April.)