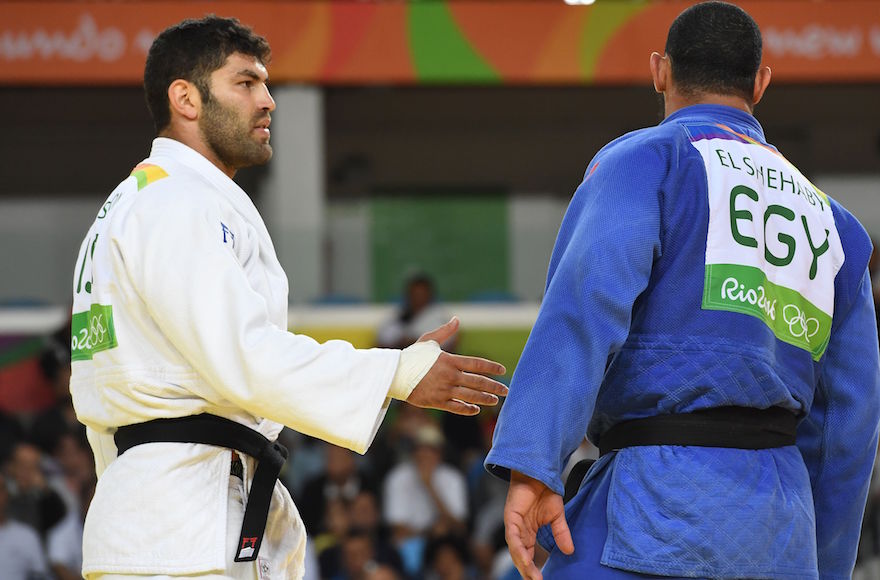 If Olympic athletes are any sign of their countries’ attitudes, things don’t look too good when it comes to relationships between Israel and its neighbors.

The Olympics at their best allow the nations of the world to forget their differences and, for two weeks, come together under the banner of sports and friendly competition.

Jews were benched during the 1936 Olympics in Nazi-era Berlin. 1972 saw the murder of 11 Israeli athletes by Black September, a Palestinian terror group, in Munich. In the decades after World War II, the games served as one more Cold War front between the United States and the Soviet Union. Authoritarian countries have been notorious for doping their athletes to gain an unfair advantage.

So it’s not entirely surprising that Arab-Israeli tensions haven’t miraculously evaporated at the Rio Olympic Village.

Still, at an Olympics where South and North Korean gymnasts can take a selfie together, it’s been jarring to see Arab athletes publicly stonewalling their Israeli rivals. So far, Israel’s been snubbed three times at Rio 2016:

The spats started even before the games began. On the way to the Olympics’ Opening Ceremony, the Lebanese delegation refused to share a bus with Israel’s athletes. The Lebanese asked the bus driver to close the door, and then the head of Lebanon’s delegation physically blocked the aisle so the Israelis couldn’t board.

To quell the argument, Olympics staff quickly found another bus for Israel.

“How is it possible that they let something like this happen and on the opening night of the Olympic Games?” Israeli sailing coach Udi Gal wrote on Facebook. “Isn’t this the opposite of what the Olympics represent and work against it? I cannot describe the way I feel. I’m enraged and shocked by this event.”

The scorn allegedly continued on the Games’ first day. On Sunday, Saudi judoka Joud Fahmy forfeited her first-round match against an athlete from Mauritius — reportedly so she could avoid facing Israeli Gili Cohen in the second round.

Saudi Arabia denied that it was a snub, and said Fahmy had been injured during training.

On Friday, another Israeli judoka got snubbed, this time by a country considered friendly to Israel. Egyptian judoka Islam El Shehaby competed against Israeli Or Sasson, but after Sasson won, El Shehaby refused to shake Sasson’s hand. He walked away to boos from the crowd as Sasson’s arm was outstretched.

Remarkably, according to the International Judo Federation, the fact that the match between Israel and Egypt took place represents “progress,” CBS News reported.

“This is already a big improvement that Arabic countries accept to (fight) Israel,” spokesman Nicolas Messner said in an email to CBS. He added that while bowing is mandatory, shaking hands is not.