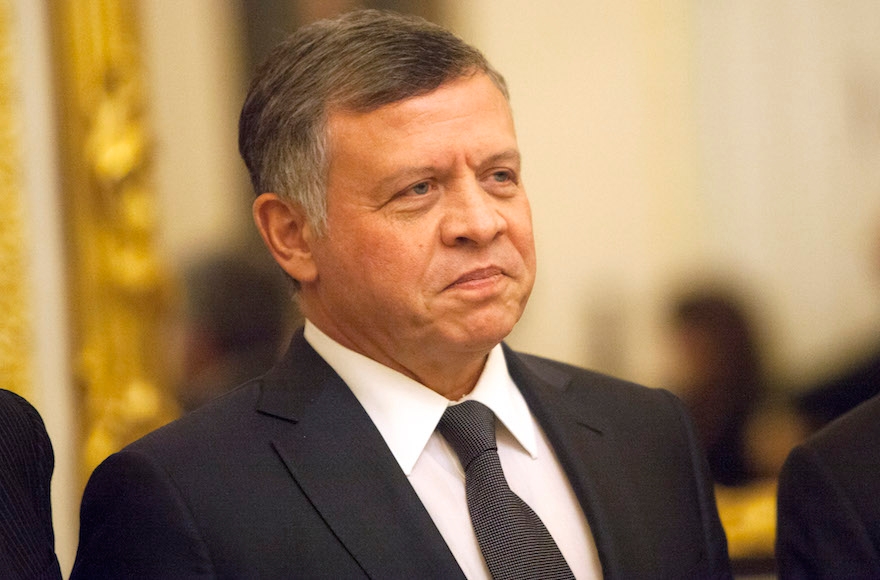 (JTA) — Jordan’s King Abdullah II vowed to fight against “repeated violations and attacks carried out by Israel and extremist groups.”

The king accused Israel of attempting to “violate the sanctity and compromise Al-Aqsa mosque,” and added, “Our responsibility towards the Muslim holy places in Jerusalem is our top priority in the international arena, and we use all means necessary to defend Al-Aqsa mosque” in an interview published Monday by the Jordanian Ad-Dustour daily.

As part of the 1994 peace agreement between Jordan and Israel, Jordan was given management of the Temple Mount and Al-Aqsa mosque, the third holiest site for Muslims. Tensions have frequently erupted on the Temple Mount and Palestinians have claimed that Israeli efforts to “Judaize” the site have motivated the current wave of violence in Israel.

Abdullah said Jordan would resist Israel’s “blatantly repeated attempts to change the status quo in Jerusalem regarding its landmarks and the prejudice against Islamic and Christian peoples.”

He affirmed Jordan’s commitment to the Palestinian people, saying that “the Palestinian issue is our first priority and a supreme national interest.”

The failure to reach a “just and comprehensive solution to the Palestinian issue and allowing the Israeli-Palestinian conflict to move away from the two-state solution,” Abdullah said, “feeds violence and extremism in the region.”

Prime Minister Benjamin Netanyahu of Israel has staunchly denied Jordan’s assertion that Israel has sought to change the status quo at the Temple Mount. Efraim Halevy, a former head of the Mossad and one of the architects of the the agreement cementing Jordan’s role as caretaker of Al-Aqsa, told JTA last year that Israel was not changing the status quo as the Palestinians have charged, adding that the Palestinians were trying to change it.

Calls to action on Al-Aqsa by Palestinian officials in September coincided with a rise in terrorist attacks that Netanyahu in October called a “terror wave.” However, the number of attacks has decreased dramatically since then, and in June returned to levels predating the hundreds of monthly attacks documented after September, which some Palestinians called “the Al-Aqsa intifada.”

Despite harsh criticism on Israel by officials in the Hashemite-controlled Jordan, where a majority of the population is Palestinian, the kingdom has maintained friendly ties with Israel and is engaged in security cooperation with the Jewish state.

Israel and Jordan had agreed on a plan to install cameras at the Temple Mount site, but the Jordanians pulled out of the agreement in April under pressure from the Palestinians.