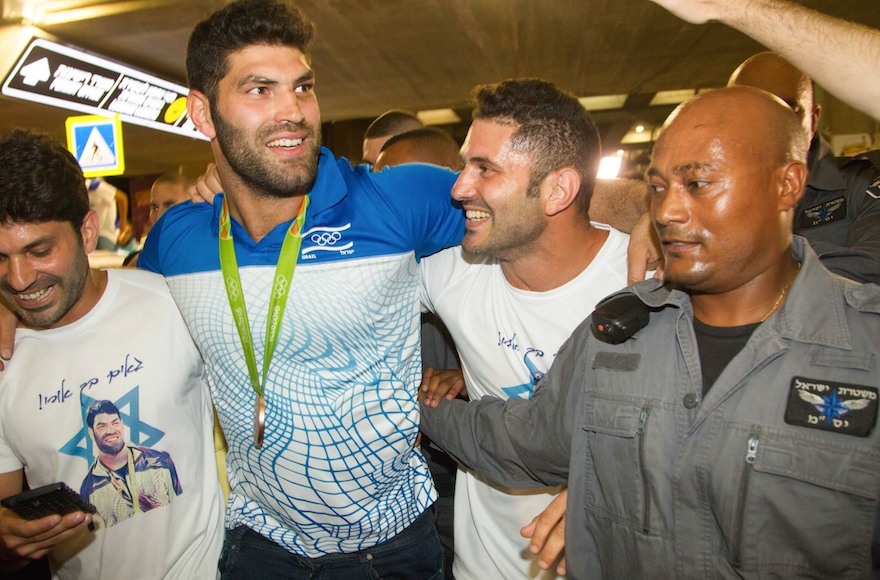 Entering the arrivals hall at the international airport near Tel Aviv Monday night, Yarden Gerbi and Or Sasson were showered with flowers. Supporters waved flags, sang patriotic songs and held up pictures and posters of the athletes. The athletes stopped frequently on their way through the airport for selfies and hugs.

“I didn’t expect so much craziness,” Gerbi said, according to the Israeli news site Ynet, which reported that nearly 1,000 people packed the airport.

Gerbi and Sasson both won bronze medals in judo at the Rio Olympics. The medals — which bring Israel’s all-time total to nine, five of them in judo — were a bright spot among disappointing performances and controversy for Israel in Rio.

After beating Egypt’s Islam El Shehaby, who refused to shake his hand afterward, Sasson won two more matches before narrowly losing to undefeated French legend Teddy Riner. He then prevailed over Alex Mendoza of Cuba to earn the bronze in the men’s over 100-kilogram category.

Gerbi defeated Miku Tashiru of Japan in the women’s under 63-kilogram category on Aug. 9 to claim her place on the Olympic podium.

After refusing to shake Sasson’s hand, Shehaby was sent home and “strongly condemned’ by the Egyptian Olympic Committee, according to the International Olympic Committee. The IOC said the Egyptian’s behavior “was contrary to the rules of fair play and against the spirit of friendship embodied in the Olympic values.”