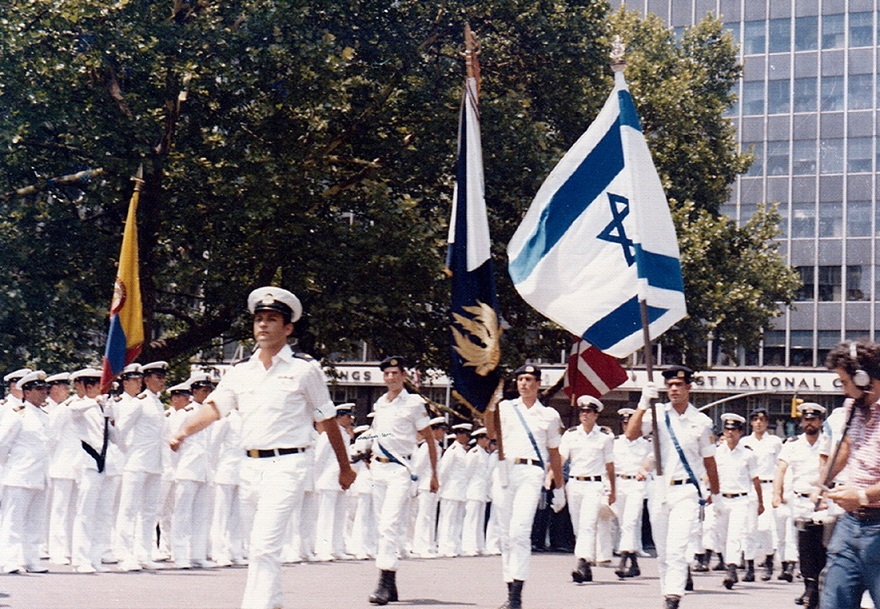 Israeli sailors marching in Manhattan during the 1976 festivities for the bicentennial and Operation Sail. (Courtesy of Hadar Shalev)
Advertisement

(JTA) – The Israeli missile boat Tarshish had just returned home in June 1976 when crew members learned near midnight that they would be heading back to sea two days later for another couple of months.

They were going to represent Israel in Operation Sail, the parade of international ships on the Hudson River near New York City to celebrate the U.S. bicentennial on July 4 of that year.

The Tarshish and another missile boat, the Yafo, would refuel in Gibraltar, Bermuda and Norfolk, Virginia, before assembling with the ships of other nations off New York’s Atlantic coast to await the start of festivities.

Hours before the bicentennial celebration was to begin, the Israeli crews would learn of the electrifying rescue by Israeli commandos of airline passengers being held hostage in Entebbe, Uganda.

Following the recent lead-up to the Entebbe mission’s anniversary, a Yafo crewman named Meir Lev-tov began searching for mates from those bicentennial events,  including a mention on the Israeli radio program “Kol Shishi.” Now they are planning a reunion for Sept. 29 at the Clandestine Immigration and Naval Museum in Haifa.

“We felt as emissaries representing Israel at such an important event in two aspects: participating in the bicentennial and [relating to] the American Jewish community,” said Hadar Shalev, 59, an engineer in Caesarea who had served on the Tarshish. “To be doing it in the country that’s the leader of the world – wow.”

During the days, “thousands of Americans Jews” would visit the crew with the boats docked at Pier 97 on Manhattan’s West Side, recalled Bennie Arieli, the Yafo’s captain. He remembered the locals basking in the glow of the Entebbe rescue.

“They gave us great respect. They were so proud,” he said. “We felt so good, so welcome.”

Arieli said one of his sailors, Yaakov Assiag, was befriended there by a local couple who set him up in business after leaving the Navy. Assiag’s current whereabouts are unknown, and Arieli hopes that he in particular can be located in time to attend the reunion.

In fact, a quarter of the approximately 90 sailors on the two boats have not been located. The eight men missing from the Tarshish are Yaakov Eizen, Eliezer Ben-Saadon, Nisim Vaaknin, Dan Hazan, Mordechai Hayun, Dan Nendelovich, Yosef Shiff and Yaron Sharvit. (A list of the Yafo’s missing was not provided to “Seeking Kin.”)

Lev-tov, an electrician on the Yafo, already experienced one reunion this year, gathering with mates from the Hanit, on which they had fought during the Yom Kippur War in 1973.

“In Israel, especially in the Navy, when you’re friends, you’re friends for life,” he said. “Why didn’t we do it before 43 years? I don’t have an answer. But I wanted to do a reunion for the Yafo, and Hadar [Shalev] said, ‘Why not include the Tarshish, too?’ ” 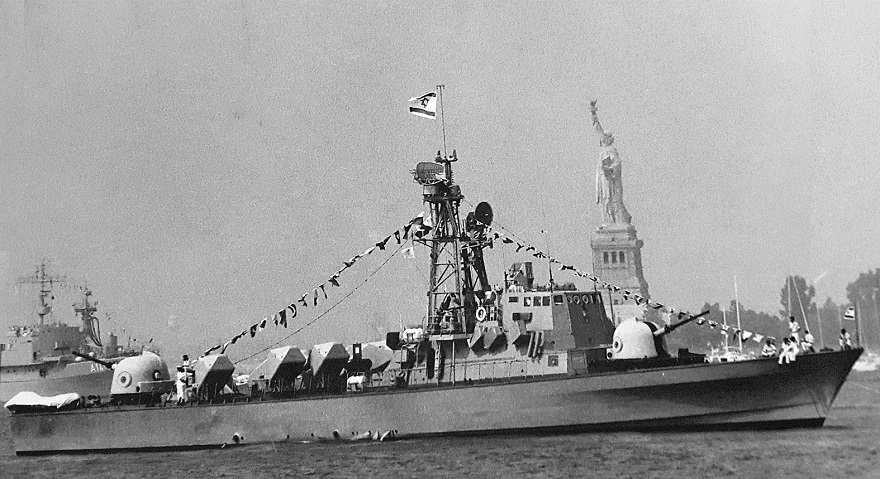 One of the two Israeli missile boats from Operation Sail in 1976 passing the Statue of Liberty. (Courtesy of Hadar Shalev)

Two interesting diplomatic developments occurred during the bicentennial mission. At port in Baltimore several days after OpSail, the naval attache for Portugal to the United States visited the Yafo, which was berthed next to his own country’s boat. Arieli asked if the Israelis could refuel in Portugal’s Azorean Islands on the way home.

“Some say that that helped start diplomatic relations between our countries,” Arieli said.

Then, during shore leave in the Azores, the Israelis bumped into Egyptian sailors on the street. The latter were reserved, telling the Israelis they had been instructed not to converse with them. But they shook hands.

The encounter, Shalev said, “was so exciting.”

Earlier, on the Hudson, the Tarshish captain, Eli Ronen, called out on the loudspeaker to the Egyptians motoring by, “Do you hear me? If you do, shalom.” The vessel, in both instances, was a legendary yacht, El Horreya, formerly owned by Egyptian kings. In 1979, Shalev would see the El Horreya in Haifa transporting President Anwar Sadat following the diplomatic breakthrough that culminated in the Camp David treaty.

Arieli wishes he had stayed in closer contact with his Navy buddies over the years, but “there was no time” – a common refrain “Seeking Kin” hears from people about their long-ago friendships.

So is when he said, “Now, in the retirement period – we’re all about 60 – we have the time to deal with our memories.” Arieli has no doubts that on Sept. 29, he will recognize “most of those on my boat, even now.”

As to the boats: The Tarshish was sold to the Chilean Navy, and the Yafo was decommissioned and sunk by the Israeli Navy more than 12 miles west of Rosh Hanikra. The Hanit was sunk, too, and is now a popular destination for divers near Haifa.

Even today, when Lev-tov drives home on Highway 2 along the Mediterranean coast, he is pulled back to his former life.

“When I see missile boats, I stop the car and light a cigarette,” he said. “My heart races. It’s in my blood.”

(Please email Hillel Kuttler at seekingkin@jta.org if you know people who served on the Yafo and the Tarshish in 1976. If you would like “Seeking Kin” to write about your search for long-lost relatives and friends, please include the principal facts and your contact information in a brief email. “Seeking Kin” is sponsored by Bryna Shuchat and Joshua Landes and family in loving memory of their mother and grandmother, Miriam Shuchat, a lifelong uniter of the Jewish people.)