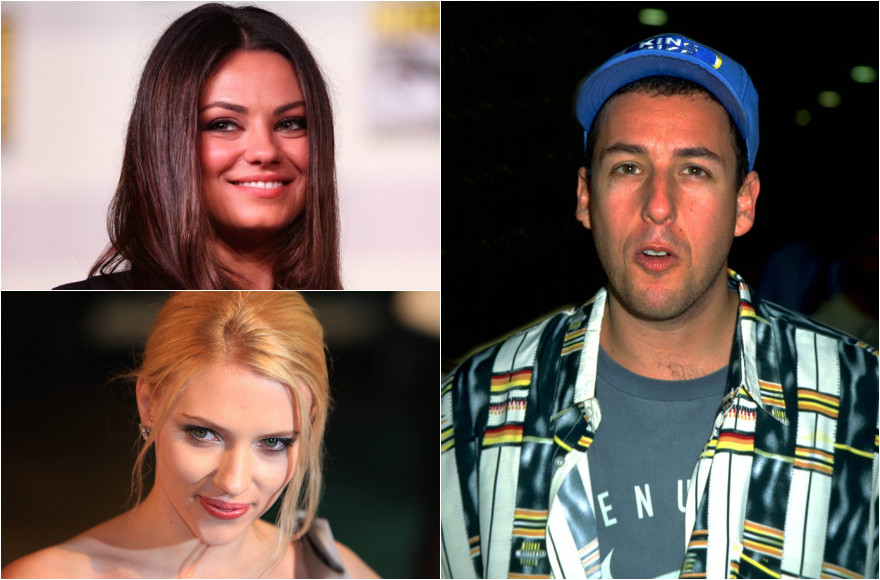 Three Jewish stars graced Forbes’ 2016 ranking of highest-paid actors and actresses — but the list also revealed the disparity in how much male and female stars are paid.

While Adam Sandler was only ranked as the 12th highest-paid among male actors, with a $30 million annual salary, he earned almost three times as much as Mila Kunis, who was the 9th highest paid actress at $11 million.

Sandler even out-earned Scarlett Johansson, who was ranked third on the women’s list at $25 million.

This imbalance is not unique to Jewish stars. The world’s highest-paid actress, Jennifer Lawrence, earned only 71 percent ($46 million) of what the highest-paid male, Dwayne “The Rock” Johnson did ($64.5 million) , Forbes reported.

And a recent study showed that men make up over 71 percent of all speaking roles in films produced by 10 major media companies.

Lawrence, who also topped the actress list in 2015, has spoken out against ingrained societal expectations that often make women scared to ask for more, when male coworkers don’t hesitate to speak up.

“I failed as a negotiator because I gave up early. I didn’t want to keep fighting over millions of dollars that, frankly, due to two franchises, I don’t need,” she wrote in an essay on the subject. “At the time, that seemed like a fine idea, until I saw the payroll on the Internet and realized every man I was working with definitely didn’t worry about being ‘difficult’ or ‘spoiled,'” she wrote.

Sandler and Johansson’s salaries dropped from the previous year, from $41 and $35.5 million, respectively, while Kunis’ salary rose from $6.5 million in 2015.

Absent from the list were Seth Rogen, Jonah Hill and Natalie Portman, who made last year’s ranking.