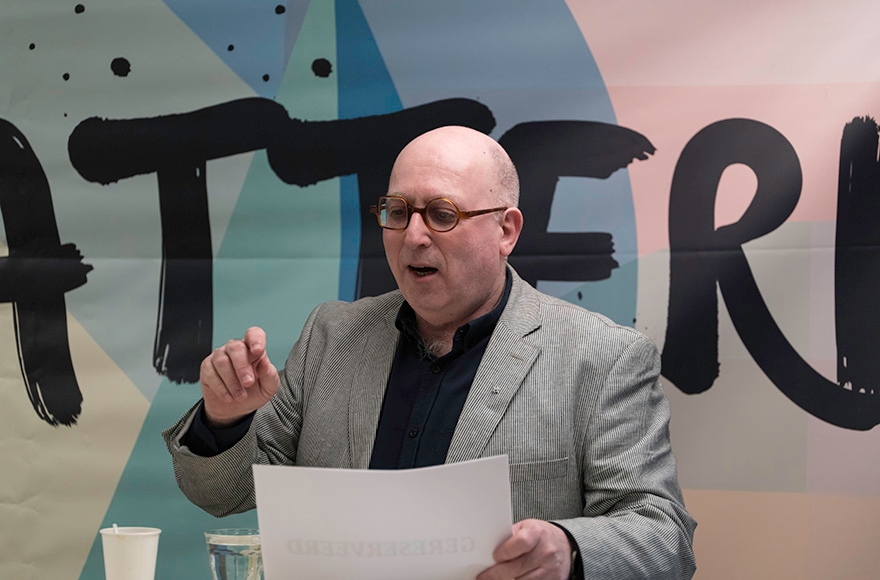 Michel Waterman, director of the Crescas Dutch Jewish cultural group, during a debate at the Crescas offices in Amsterdam on April 5, 2016. (Photo Courtesy of Crescas)

The milestone was reached earlier this year, according to the director of Crescas, Dutch Jewry’s main cultural organization, which set up five years ago a digital book collection that grew into one of the Netherlands’ largest websites of its kind.

Most books are freely accessible and copyright free on Crescas’ Digital Jewish Library because they were written by authors who died more than 70 years ago, including masters such as including Carry van Bruggen — who in 2002 was included in the Society of Dutch Literature’s official Canon — and her brother, Jacob Israël de Haan, who was murdered in 1924 in pre-state Israel by Jewish extremists for his work with Arab partners to prevent the establishment of a Jewish Zionist state.

Crescas Director Michel Waterman, who is retiring this year after 13 years on the job, said the traffic recorded on the Jewish library website makes it one of the organization’s most successful initiatives to date in terms of reach.

“It’s not only offering a service to society in general, but also engages Dutch society in Jewish culture while preserving it,” he said.

The collection also contains copyright-protected content. To the works of authors who died more recently, Crescas obtained the permission of the their descendants. But it was not always easy, Waterman said. “The older the book, the more detective work we needed to do to track down the descendants,” he said.

But at other times, descendants of late Jewish authors brought to Crescas on their own initiative printed copies of books published by their ancestors, as in the case of the family of Sal Santen, a former communist activist who died in 1998 and who wrote about politics as well as on Jewish life in Amsterdam.

One of the collection’s gems is a 1918 copy of a book entitled “Jewish Nursery Rhymes” compiled by Clara Pinkhof. It contains some forgotten Dutch-language nursery rhymes that are not available anywhere else online.

Crescas, with technical assistance, scanned these and hundreds of other books, offering them in PDF form, which can be read on most electronic book readers, smartphones and computers.

At a time when cutbacks are forcing some Dutch universities and institutions of higher learning to close Hebrew-language studies frameworks, Crescas evening Hebrew classes have become key to filling the vacuum. This year, the organization set up its first semester of virtual classrooms conducted via video conference software, said Waterman.

As an Amsterdam-based organization, Crescas can use its virtual projects to “meet its responsibility to serve also audiences outside the capital,” Waterman said.