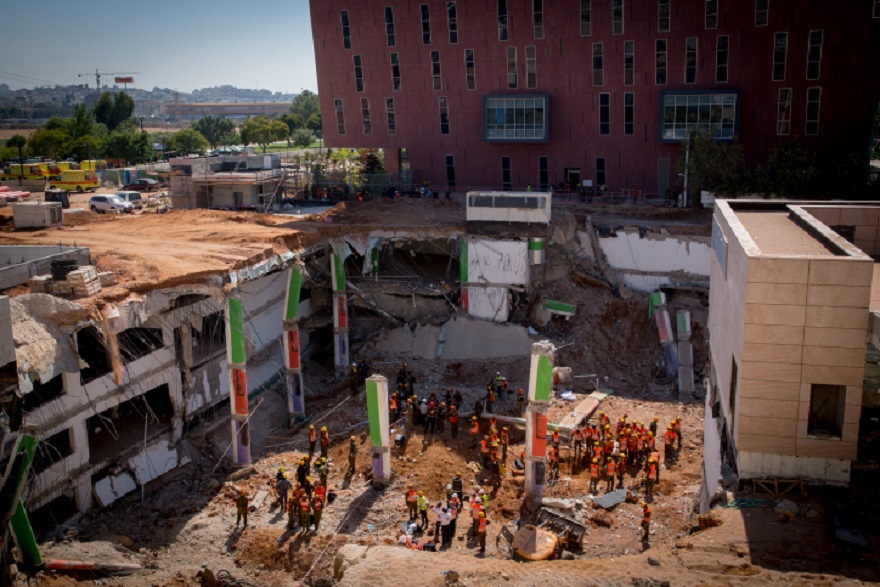 Rescue workers at the site where a crane crashed at a construction site, killing two and injuring at least 20 in Tel Aviv, Sept. 5, 2016. (Yonatan Sindel/Flash90)
Advertisement

JERUSALEM (JTA) — At least two construction workers are dead and five reportedly are missing following the collapse of a tiered parking structure under construction in Tel Aviv on Monday morning.

Two workers who had been trapped under the rubble for hours were pulled out early Monday evening.

The search-and-rescue effort for the missing workers, who are believed to be trapped, was expected to last through the night, The Times of Israel reported.

At least 24 workers, Israelis and Palestinians, were injured in the collapse. One of the dead has been identified as a worker from the Ukraine, the other is reported to be Palestinian.

Some 18 construction workers were rescued in the hour after the collapse late Monday morning; structural failure is being cited as the cause of the accident.

Three workers who had been trapped underground were rescued earlier after firefighters dug through rubble and sand to reach them, according to reports. One of the workers was seriously injured.

A Tel Aviv Police spokesman said there is danger that the structure, in the northern part of the city, will collapse further. Initially the accident was blamed on the collapse of a crane.

The Israel Defense Forces also sent a K-9 unit to the scene to help locate missing workers and others who may be trapped in the rubble, according to reports.

The parking garage, for which construction began in November 2014 and was to be completed at the beginning of next year, was slated to have four levels.