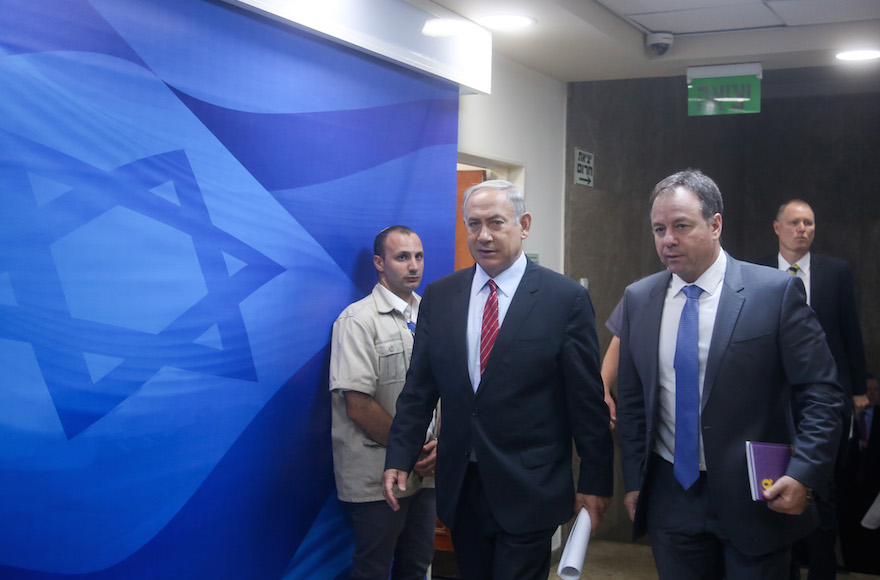 “Yet the Palestinian leadership actually demands a Palestinian state with one precondition: No Jews. There’s a phrase for that: It’s called ethnic cleansing,” he said in a video released Sept. 9. “And this demand is outrageous. It’s even more outrageous that the world doesn’t find this outrageous.”

The reaction from critics was swift. Later the same day, the State Department strongly disagreed with Netanyahu’s characterization of the Palestinian position, calling his remarks “inappropriate and unhelpful.” On Wednesday, United Nations Secretary-General Ban Ki-moon called the analogy “unacceptable and outrageous.”

So who’s right? Palestinian leaders have indeed insisted their state, if it were to become reality, be free of Jewish settlers. But the vast majority of settlers don’t want to stay behind in a future Palestinian state anyway, and many Israeli politicians are opposed to letting them.

Here’s a closer look at how Israel, the Palestinians and the settlers view the issue.

Netanyahu is consistent on the settlers, but Israel is not.

Netanyahu has used the ethnic cleansing analogy before — or a version of it. According to The Times of Israel, in the 2000 edition of his book “A Durable Peace,” Netanyahu wrote that the campaign for a “hostile, Judenrein Palestinian state” is based “not on justice but on injustice.” “Judenrein” was the Nazis’ term for an area “cleansed” of Jews.

In January 2014, during the latest failed U.S.-brokered Israeli-Palestinian peace talks, Netanyahu said to Canada’s CTV, “Now, in the Palestinian state, the way it’s being contemplated, they’re saying: Well, no Jew can live there, it has to be Jew free – ethnic cleansing. Well, what is that? There are Arabs who live here, but they can’t contemplate Jews living there.”

An anonymous source in the Prime Minister’s Office told The Times of Israel later that month that Netanyahu would demand all settlers have the option to remain in the West Bank under a peace deal with the Palestinians. Netanyahu would not forcefully remove any settlements or settlers, the source said.

Many who accept Netanyahu’s framing note that when Israel was created, it extended citizenship to the Muslim and Christian Arabs living within its territory. Today there are approximately 2 million Arab Muslim, Christian and Druze citizens of Israel.

Given his ideological consistency over nearly two decades, it’s reasonable to take Netanyahu at the anonymous source’s word. But if the Palestinians were to finally get a state under a different prime minister, there’s a good chance that leader would have a different view on what to do about the settlers.

Leading politicians from across the political spectrum disagree with Netanyahu on the issue. In 2014, right-wing members of his governing coalition slammed the prime minister for suggesting that settlers could live under Palestinian rule, saying he would be risking their security and that of Israel. Among the critics was Naftali Bennett, then economy minister and now education minister.

And back in the 2008, during the Annapolis peace talks, center-left politician Tzipi Livni rejected an offer by Palestinian negotiators to keep some settlements under Palestinian sovereignty on similar grounds, according to minutes of a meeting leaked by Al Jazeera. One of the opposition voices who criticized Netanyahu’s recent video, Livni at the time was the foreign minister under then-Prime Minister Ehud Olmert.

“How can I provide Israelis living in Palestine with security?” she asked. “I cannot bear the responsibility of their life in case they are exposed to danger and then the army will have to interfere.”

Most settlers wouldn’t stick around in a Palestinian state anyway.

The settler movement was founded with the goal of extending Israeli sovereignty over the Gaza Strip and Judea and Samaria, its preferred terms for the area known as the West Bank. Some 400,000 Israelis live in the West Bank, excluding eastern Jerusalem, and especially for an ideological core group, relinquishing their homes and Jewish sovereignty would be a personal and political catastrophe.

Still, only a small minority of settlers from the political fringes would stay without the protection of Israeli security forces. Such settlers would prefer to remain on the land rather than living within Israel. While many settlers would resist efforts by Israel to expel them, as they did in the Gaza disengagement of 2005, few would likely remain in a Palestinian state once a deal was struck.

Nachum Pachenik, a settler who heads the coexistence group Land of Peace, said he is among those who would join a future Palestinian state. In a 2014 interview with the Forward, Pachenik estimated that up to 10,000 settlers would stay if they were given the option. A 2011 survey by Land of Peace found 3.5 to 4.5 percent of settlers, or some 16,000, would stay.

Yehuda Etzion, an early settler leader who was jailed for plotting to blow up the Dome of the Rock in the 1980s, told the Forward that Israeli withdrawal from the West Bank is prohibited “according to the Torah and all we have learned from our ancestors.” But if Israel were to give up the settlements, Etzion said he would stay in his home in Ofra. He estimated that one in five of his more than 3,000 neighbors would follow his lead.

“If [the Palestinians] come and kill us on the first night, we’ve solved the problem because we’re not alive,” he said.

The Palestinians want the settlers out, at least at the moment.

Palestinian leaders have flatly rejected the idea of any settlers remaining on the territory of their future state, while insisting it is not an issue of religion.

“In a final resolution, we would not see the presence of a single Israeli — civilian or soldier — on our lands,” Palestinian Authority President Mahmoud Abbas said in July 2013, just before the latest peace talks.

In response to Netanyahu’s comments in January 2015, chief Palestinian negotiator Saeb Erekat reiterated his boss’s position, explaining that Israeli settlements in the West Bank are illegal under international law. Erekat later told the official Palestinian Authority daily Al-Ayyam that the stance on settlers had nothing to do with singling out Jews.

That same day Hanan Ashrawi, a member of the Palestine Liberation Organization’s Executive Committee, told The Times of Israel that “Palestine” could not accept “ex-territorial Jewish enclaves” where residents maintained Israeli citizenship. But, she said, Jews would be free to apply to become Palestinian citizens.

Akiva Eldar, a columnist for the website Al-Monitor, suggested in 2014 that the Palestinians don’t want to get stuck with the “troublemakers” most likely to stay behind.

Still, Palestinian opposition to the idea has not always been so firm and could soften again. Back in 2009, then-Palestinian Prime Minister Salaam Fayyad said Jews who stayed behind in “Palestine” would enjoy the same rights as other citizens. And there was the Palestinians’ 2008 offer to take sovereignty over some settlements.

Peace agreements are about land swaps, not population transfers.

Critics of the “ethnic cleansing” analogy also say it distorts the mechanisms of the kinds of peace deals that have been discussed — namely that any deal will include land swaps involving Israel retaining territory that includes large settlement blocs.

“Netanyahu is well aware of the necessity to provide security to settler communities,” Jonathan Greenblatt, CEO of the Anti-Defamation League, wrote in an essay critical of Netanyahu’s comments. “That concern has led those involved in negotiating a resolution to the Israeli-Palestinian conflict to favor including the majority of settlers within Israel. Territorial compromise presents less of a challenge than creating a large minority of Jewish residents in a Palestinian state.”

Supporters of a two-state solution note that it is predicated on the separation of two mutually hostile populations.

Retaining Jewish outposts “in the heart of the Arab population,” wrote Ben-Dror Yemini, a political columnist for Yediot Acharonot, “is the antithesis of the idea of self-determination.”