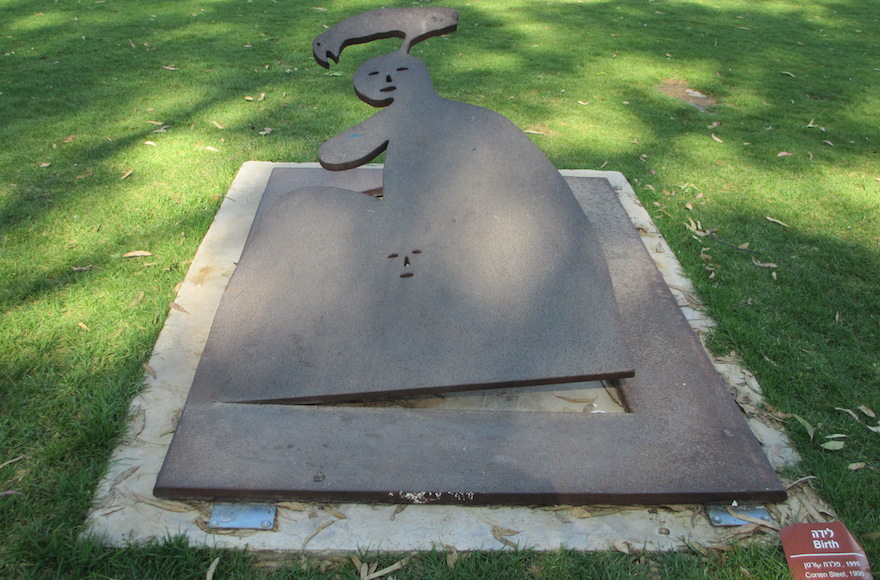 Young religious women in Israel have been touching this statue, titled "Birth," by the late artist Menashe Kadishman, believing it has the power to increase fertility. (Avishai Teicher/ Wikimedia Commons, CC BY SA 4.0)
Advertisement

(JTA) — An Israeli municipality near Tel Aviv urged young religious women to refrain from touching a statue that some visitors believe has the power to increase fertility.

The unusual statement by Ramat Gan Deputy Mayor Adva Pollak follows pilgrimages in recent weeks to a statue titled “Birth,” by the late artist Menashe Kadishman, which was placed earlier this year in the art garden of the city’s National Park, the news site nrg reported.

“We inform the public that this statue has no special powers, and is merely one of many works of art on display in the park,” Pollak was quoted as telling Yediot Acharonot. “It would be wrong to attribute such powers to the statue. We welcome visitors who wish to enjoy the art, but I call on them to refrain from lying on it.”

Crowds of young, religious women visit the statue believing it will help them conceive, according to Yediot. Kadishman was a secular Jew whose acclaimed oeuvre featured many religious symbols, including sacrificial sheep.

In a eulogy for Kadishman, who died last year at 83, his friend Haim Shtenger wrote that Kadishman “was the secular equivalent of a great rabbi” and a “cultural icon” associated with secularism of Tel Aviv.

A Ramat Gan resident told Yediot that he first noticed the pilgrimage to “Birth” this summer.

The metal statue features a rough outline of a woman, drawn in infantile style, with large breasts and a smiley face etched into her stomach.

Home to a large population of haredi and traditional Jews for whom large families are the norm, Israel has seen a number of faddish sites where women go to improve their chances of conceiving, including a cafe said to serve a salad with supernatural powers and a supermarket in Ashdod where customers could sit on a special throne-like fertility chair.

The Ramat Gan statue is one of 14 Kadishman works on loan from the descendants of the celebrated artist. Six of the statues, including “Birth,” were placed at the Ramat Gan National Park this summer.