Netanyahu gets cheered and booed at ‘Hamilton’ performance 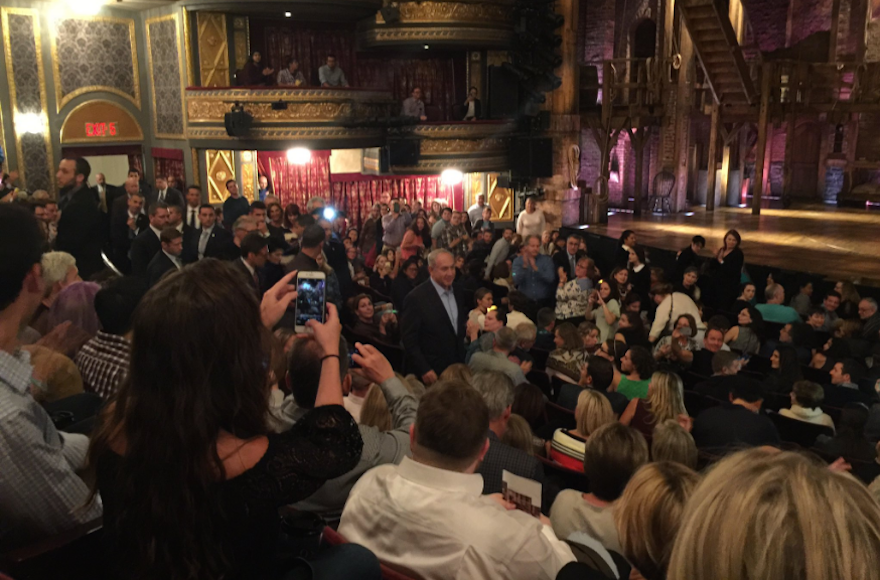 Benjamin Netanyahu caused quite a stir when he attended a performance of "Hamilton" in New York City, Sept. 24, 2016. (Screenshot from Twitter)
Advertisement

The average Broadway audience doesn’t start cheering and booing before the show starts. But it isn’t everyday that a loved and hated prime minister walks into a theater crowd with a gun-toting posse of security guards.

Israeli Prime Minister Benjamin Netanyahu attended a performance of the smash hit musical “Hamilton” on Saturday night to wrap up a busy U.S. trip. When he entered to take his seat — accompanied by Secret Service guards, TSA security and some guys who “very much look like Mossad,” according to Wall Street Journal reporter Liz Hoffman — audience members couldn’t help but notice.

At what must be the safest #Hamilton since Obama. Netanyahu in the house, plus Sec Service, TSA and some guys who very much look like Mossad

The New York Post reported that Netanyahu received “a lot of applause” but also “a few loud boos.” One Twitter user in the crowd said that two female audience members had to be escorted out after shouting “Free Palestine.”

At Hamilton with Netanyahu attending. Two women leave the theater screaming, "Free Palestine!" as they shove their way through the security.

“Hamilton” ticket prices have been sky high for months, so that was quite an expensive protest.

Netanyahu’s appearance apparently caused a delay in the performance start time, and some complained about the unexpected security detail on social media.

It's hard enough getting to see Hamilton on a Saturday night: Netanyahu just in front added airport security pic.twitter.com/oW343anIW9

The rest of Netanyahu’s trip was also fairly full of drama — last Wednesday, he met, likely for the last time, with President Obama. On Thursday, he spoke at the U.N. and on Friday, he met with Secretary of State John Kerry. On Sunday, just in time for the first presidential debate on Monday, Netanyahu met with both Donald Trump and Hillary Clinton.