When Shimon Peres needed a speechwriter — and I needed a nap 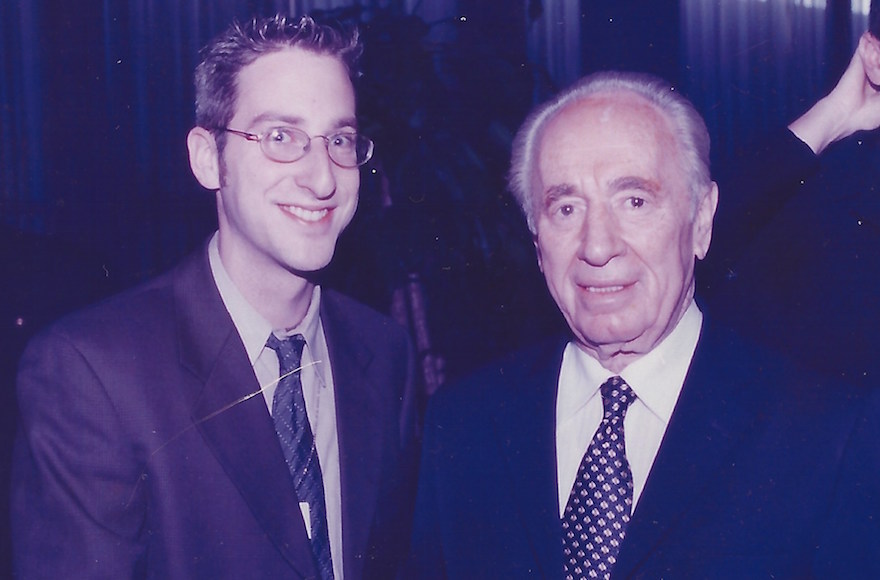 (JTA) — It was 9 o’clock on a weekday evening and I was lounging around my Brooklyn apartment in pajamas when the call came summoning me to a Midtown Manhattan hotel. Shimon Peres needed a speechwriter; I was a speechwriter at the time for Israel’s ambassador to the United Nations.

It was the fall of 2001, and Peres was in town for the annual traffic nightmare known as the U.N. General Assembly, when heads of state travel to New York City for a multi-day exercise in marathon speechmaking. Israel’s participation in this ritual was a study in inefficiency, confusion, loose planning, and the expected jostling for proximity and access.

When I arrived, the entire entourage was attending the Broadway hit “Mamma Mia!” and for the better part of an hour I sat around smoking cigarettes with a handful of secretaries and security men.

Eventually a member of Peres’ security detail — blue suit, buzz cut, ear piece — walked in and asked which of us was Ben Harris. I identified myself and followed the man down the hall, where he opened a door, pushed me inside and closed it behind me. That’s how I came face to face with Peres, who was clad in a sleeveless white T-shirt and in bare feet.

In my meek Hebrew, I stammered that I was the speechwriter, and we spent what felt like an interminable awkward minute sizing up one another.

Eventually, Alon Pinkas, then Israel’s consul general in New York, walked in and got the show on the road. For the next hour, Peres dictated his speech to me. Though already pushing 80, Peres was an old hand at this stuff, and the florid metaphors flowed effortlessly. I struggled to keep up.

When it was over, Peres retired for the night and I spent the wee hours polishing and pruning. Sometime before dawn, I submitted the final text and stumbled back to Brooklyn to bed.

In the General Assembly hall later that morning, I sat in the gallery seats with the rest of the Israeli delegation, who applauded mightily when Peres finished and yielded the stage to the foreign minister of Cambodia. Afterward, we trailed him through the hallways as he made small talk with other government officials in multiple languages. At some point, someone thrust the two of us together for a photo op — me in my rumpled suit, giddy and still buzzing from the all-nighter, Peres looking slightly bored after what must have been his thousandth handshake and smile that day.

Weeks later, as my tenure at Israel’s U.N. mission was winding down and grad school applications littered my desk, I worked up the chutzpah to see if my service to Israel’s foreign minister might merit me a recommendation. The administrative people in New York told me to dream on, but miraculously some months later the letter arrived. It was all of four sentences long and included two typos, and I had to make a special request to the London School of Economics to add it to my file months after the deadline.

Still, it did the trick. I got in.

(In more than a decade with JTA, Ben Harris has reported from more than 15 countries. His writing has also appeared in The Wall Street Journal, the Boston Globe and New York magazine, among other publications.)