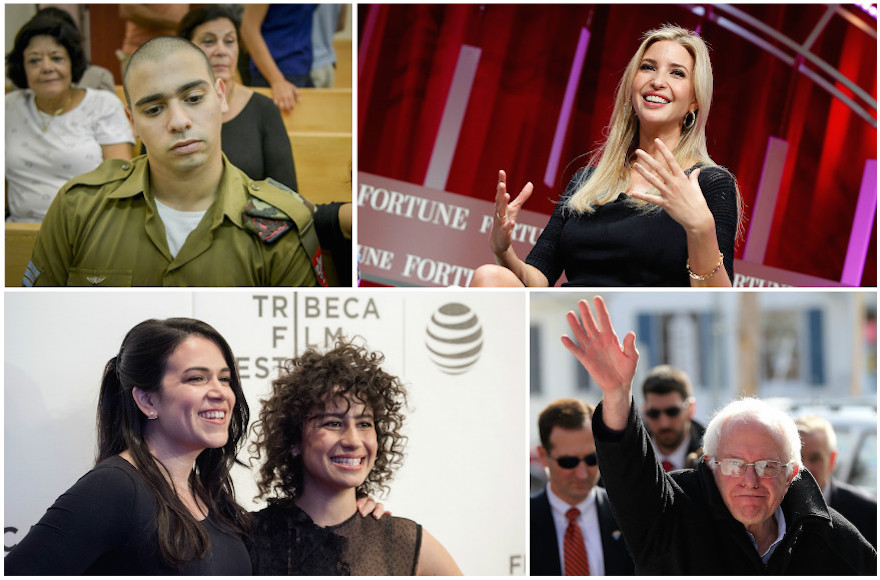 (JTA) — With Rosh Hashanah approaching, which Jews made the biggest news in the past Jewish year? From the presidential election to Israel to your TV screen, here are 14 Jews who earned headlines during the past 12 months for their accomplishments, blunders, mitzvahs and missteps. 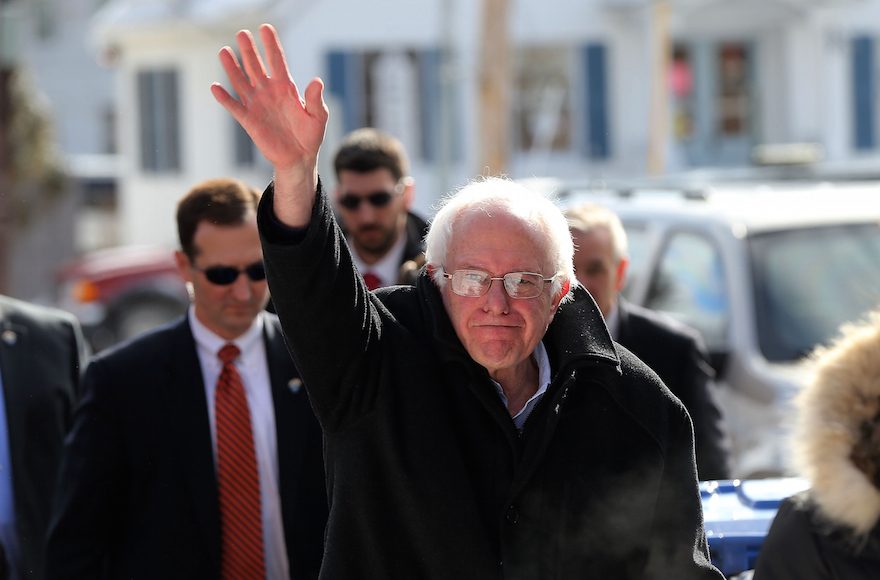 First on our list is the first Jewish candidate to win a major party’s presidential primary. Once considered the longest of shots, the septuagenarian  senator rode a wave of enthusiasm among young voters and took his insurgent campaign all the way to the Democratic National Convention, garnering more than 40 percent of primary votes. The Vermont Independent pushed rival Hillary Clinton to the left on a range of issues. He also broke ground by criticizing Israel in ways seldom heard from a mainstream candidate. Last, but certainly not least, he gave Larry David a role for the ages. 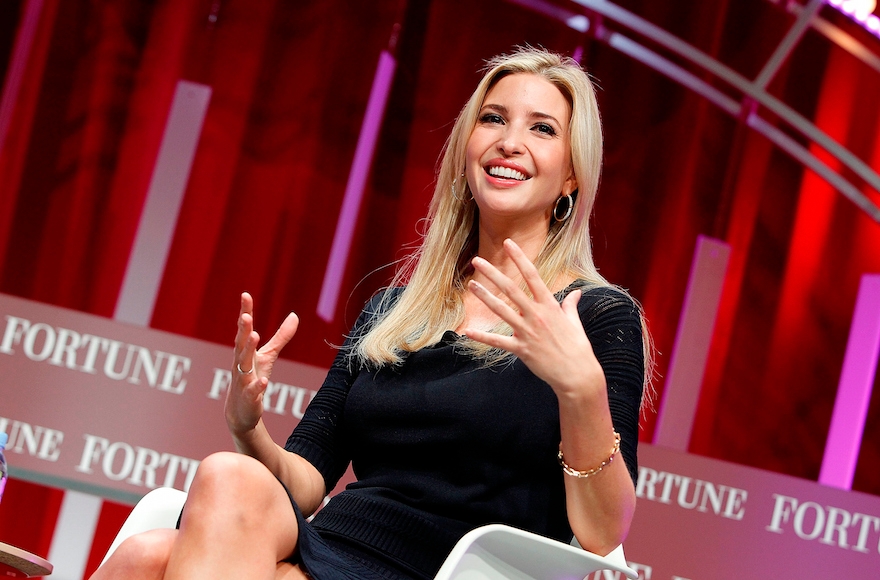 For Jewish Americans, one of the most fascinating parts of Donald Trump’s unorthodox campaign is his Orthodox Jewish daughter, Ivanka. A self-styled champion of working women and erstwhile friend of Chelsea Clinton, Ivanka has become one of her father’s most prominent surrogates. She’s added a softer touch to an often brash campaign, and has influenced her father on women’s issues, including family leave. Married to developer and key Trump adviser Jared Kushner, she has proved to be one of the campaign’s main weapons in defending her father against charges that he countenances anti-Semitism. 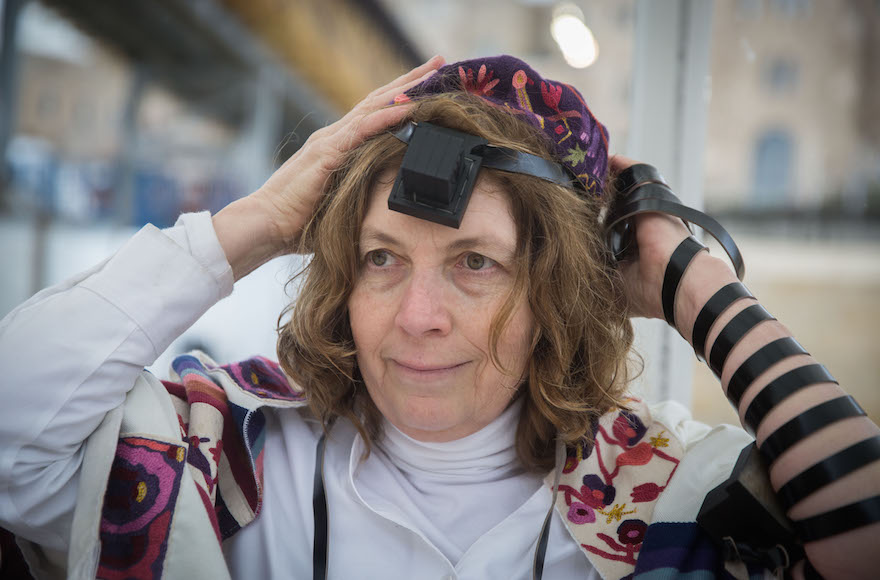 For decades, Hoffman has led the fight for women to host prayers at the Western Wall. And after years of being arrested, pelted with eggs and shouted at, her group, Women of the Wall, grew closer than ever to its goal this year. After three years of negotiations, Israel’s Cabinet approved a plan to expand and upgrade the site’s non-Orthodox prayer section. But the controversy is far from over: Implementation of the deal has been stalled amid political wrangling for months, while some feminists complain the compromise represented a capitulation to the wall’s Orthodox authorities. 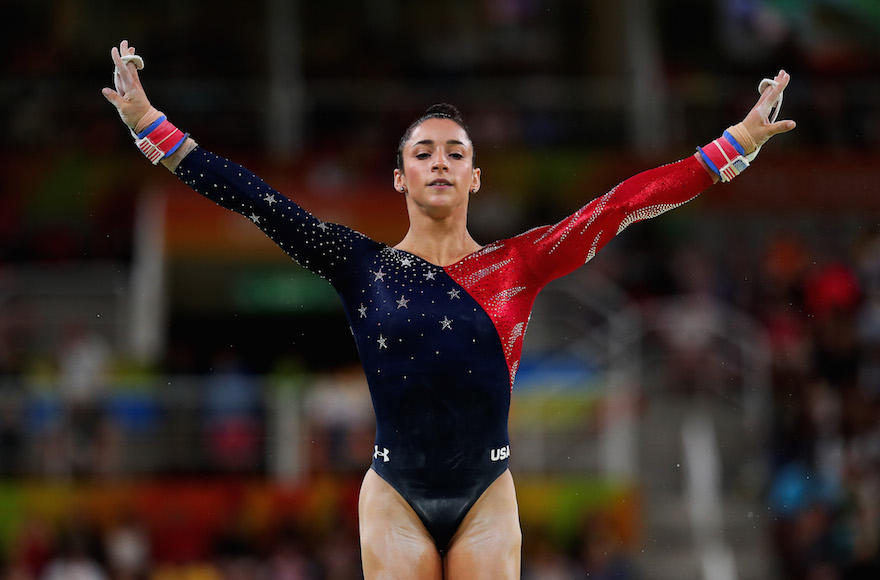 Our favorite Jewish gymnast didn’t disappoint at this summer’s Rio games. At 22, Raisman was the U.S. women’s gymnastic team captain and its oldest member (her nickname: Grandma). In addition to helping the Americans win team gold again, Raisman took the silver medal in the all-around and floor exercises, adding to the two golds and one bronze she won in 2012. Raisman has vowed to return in 2020. Hopefully her delightfully nervous parents can come along, too.

Jonathan and Esther Pollard following his release from prison, Nov. 20, 2015. (Courtesy of Justice for Jonathan Pollard)

Last November, a long-running saga ended between the American Jewish establishment and the United States government. Pollard, a civilian Navy intelligence employee arrested in 1985 for spying for Israel, was paroled after serving 30 years in a federal prison. At first an embarrassment to Jewish leaders, Pollard in recent years began to be seen as a martyr by some Jews who protested his long prison term. He will not be able to move to Israel, as he wished, but he can surf the internet.

As Israeli security forces struggled to stem a wave of stabbings this year, Israeli soldiers drew criticism for what some observers — including inside the military — called a disproportionate response. No case proved more controversial than that of Azaria, a 19-year-old soldier who killed a Palestinian assailant lying wounded on the ground. Azaria’s case, which is still in trial, has divided Israel. Critics say he broke the rules of engagement. His defenders say he was doing his job.

The man who was the all-powerful speaker of the New York State Assembly is now serving a 12-year prison sentence. Silver, 72, is an Orthodox Jew who gained a reputation as one of New York’s foremost power brokers during more than two decades in the speaker’s post. A Democrat from Manhattan’s Lower East Side, Silver was arrested in 2015 on seven counts of honest services fraud, extortion and money laundering. He was convicted in November of that year and sentenced to his dozen years behind bars in May. Lamenting the length of the sentence, The Jewish Press, a newspaper serving New York’s Orthodox community, said his fate is relevant to New York Jewry due to “his extraordinary legislative achievements which revolutionized the way members of the Jewish community are able to go about their everyday lives without having to sacrifice the practice of … their faith.”

Debbie Wasserman Schultz sitting for an interview at the Wynn Las Vegas Resort prior to the first Democratic presidential debate, Oct. 13, 2015. (Luke Sharrett/Bloomberg via Getty Images)

A rising Jewish star in the Democratic Party suffered a swift fall. Wasserman Schultz, a South Florida congresswoman who once said she voted as “a Jewish mother,” began serving as chair of the Democratic National Committee in 2011. She had powerful allies and a famous fundraising prowess. But right before this year’s Democratic National Convention, leaked emails showed her staffers strategizing against Sanders during the presidential nomination race. Instead of gaveling in the convention, Wasserman Schultz resigned her post — though she did win her Democratic primary this year. 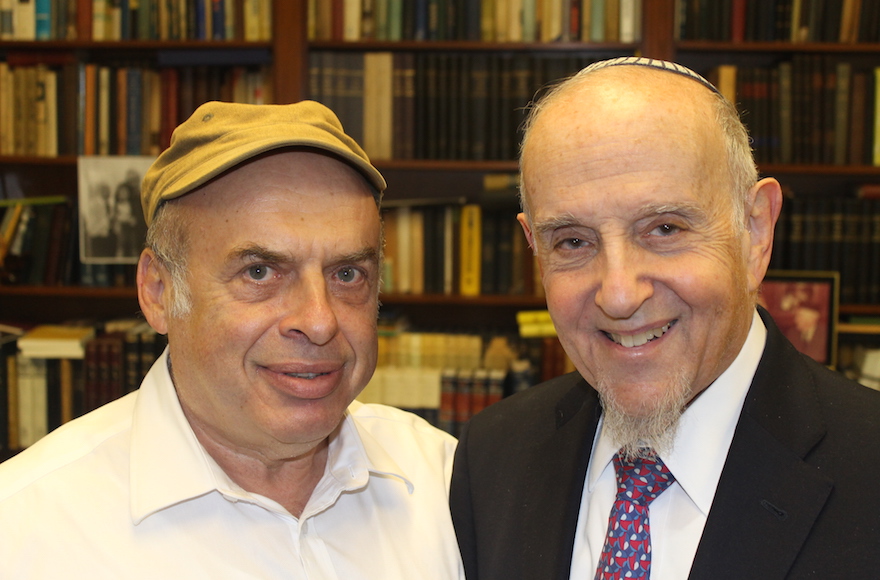 Rarely does a retired octogenarian rabbi make this much news. Lookstein, the former rabbi of the posh Congregation Kehilath Jeshurun Orthodox synagogue on Manhattan’s Upper East Side, was at the center of two controversies this year. First, a conversion he supervised was declared invalid by Israel’s Chief Rabbinical Court, causing further friction between Israel and Diaspora Jewry. Then Lookstein, who oversaw Ivanka Trump’s Jewish conversion, agreed to deliver the opening invocation at the Republican National Convention. Following an outcry over what critics called an implicit endorsement of Donald Trump, Lookstein withdrew, explaining, “I have never been involved in politics. Politics divides people.” 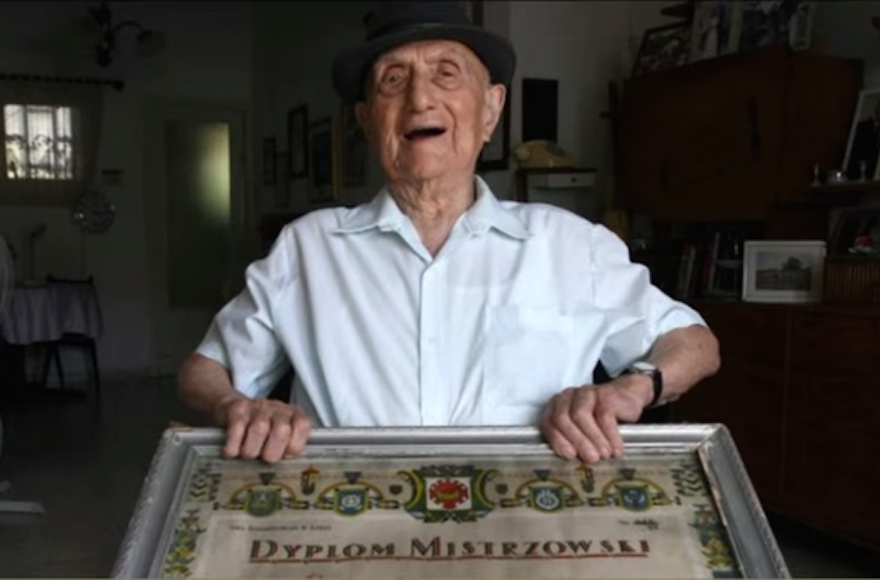 How do you fit 113 candles on a cake? That’s one happy dilemma Kristal could contemplate when Guinness World Records certified him as the world’s oldest man in March. Kristal, who turned the big 1-1-3 in September, is a Holocaust survivor who made a living making candy starting in 1920. After surviving Auschwitz, where his first wife was killed, Kristal remarried and moved to Israel. In September, his family announced that Kristal would celebrate his bar mitzvah a century late. He couldn’t at age 13 because of the war — World War I, that is. 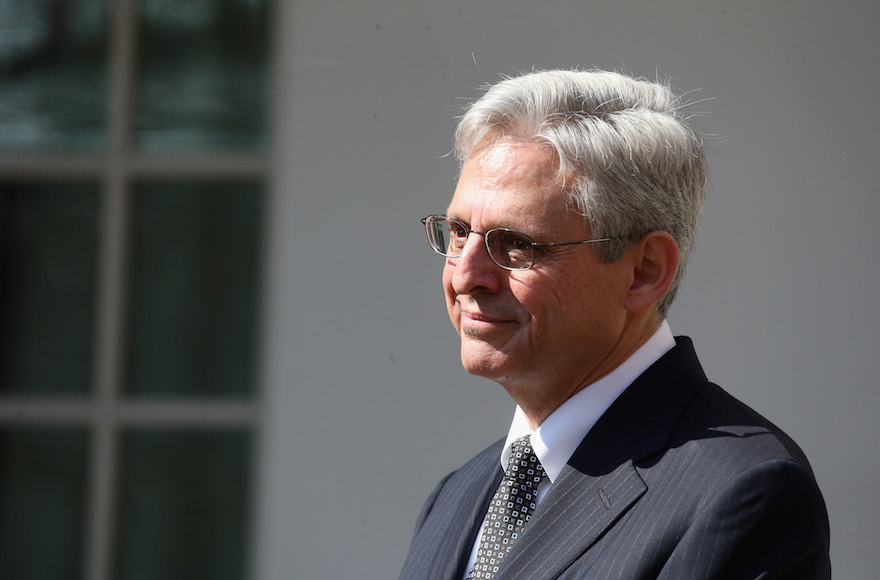 Judge Merrick Garland being introduced by President Barack Obama as a nominee for the Supreme Court in the Rose Garden of the White House, March 16, 2016. (Mark Wilson/Getty Images)

Always a Supreme Court justice nominee, never a Supreme Court justice. That’s been the fate of Garland, who was nominated to the country’s highest court after Justice Antonin Scalia died in February. Garland is currently the chief judge of the U.S. Court of Appeals for the District of Columbia Circuit, and he’s been in limbo for a while. Fearing a liberal majority on the Supreme Court, Senate Republicans have refused to hold a hearing on Garland’s nomination with the presidential election nearing. 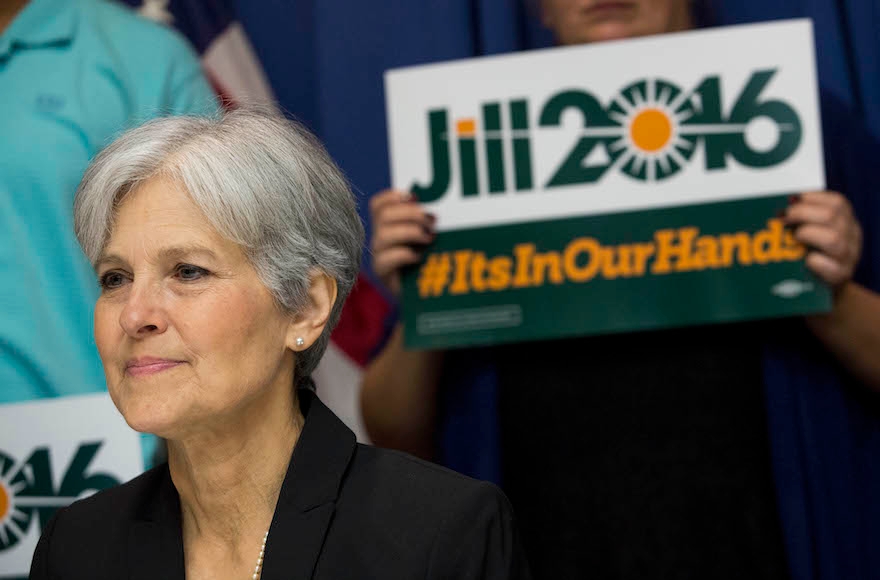 If you want to elect a folk-singing physician who seeks to end foreign aid to Israel, Stein is your candidate. Making her second run as the Green Party’s presidential nominee, Stein is promising a “Green New Deal,” a universal basic income and a significant reordering of America’s foreign policy — including support for the Boycott, Divestment and Sanctions movement targeting Israel. Stein has made some headlines this year — among other things, a warrant for her arrest was issued in North Dakota for her actions during a pipeline protest — but she’s languishing in the polls at about 3 percent. 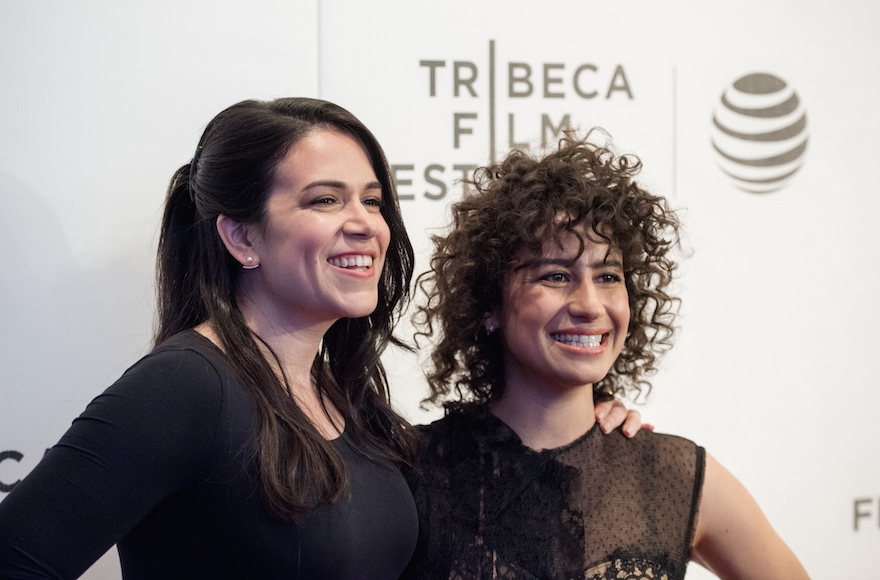 The ladies of “Broad City,” which completed a hilarious third season this year, have never shied away from making Judaism a natural part of their New York City stoner comedy. Earlier episodes featured such gems as sex talk at a shiva and a T-shirt reading “challah back.” An online only video features the friends trying to talk themselves through the Yom Kippur fast — while eyeing bacon-and-egg sandwiches. But Abbi and Ilana took the Jewish factor to a new level in this year’s two-part season finale, which saw them take a flight to Israel with “Birthmark,” a parody of Birthright. We won’t spoil the episode, but it features Abbi singing a Christmas carol and Ilana itching to join the “mohel chai club.”