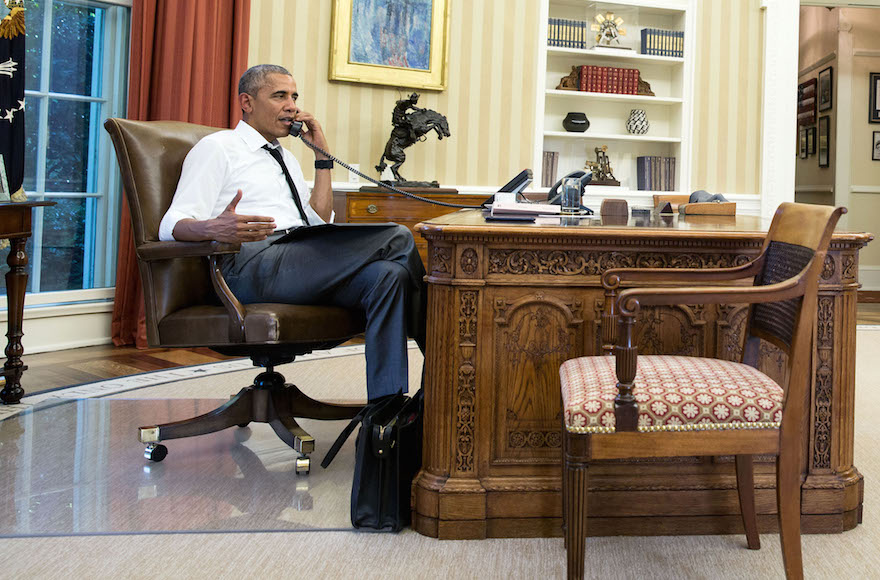 WASHINGTON (JTA) — President Barack Obama told rabbis in a pre-High Holidays call that Jews should share their story of working to advance civil rights as a means of inspiring change at a time of racial tensions.

Obama spoke Monday with over 600 rabbis from the Reform, Conservative, Orthodox and Reconstructionist movements. His tone on the last such call before he leaves office was reflective.

Obama was introduced by Rabbi Leonard Matanky, the honorary president of the Rabbinical Council of America, an Orthodox umbrella.

“Rosh Hashanah is a time for reflection, and I’m not exempt from that,” Obama said in his opening remarks, which were on the record. “So, looking back on the last eight years, I’m both proud of what we’ve accomplished together, but also mindful of the work we have before us.”

His brief opening remarks covered the $38 billion defense assistance package he recently announced for Israel and what he described as the success of last year’s deal between Iran and the international community, swapping sanctions relief for safeguards that Iran would not obtain a nuclear weapon. He also spoke of his administration’s efforts to combat anti-Semitism and its allocation of resources to assist elderly Holocaust survivors.

Obama recommended, among other things, registering voters, working with clergy in other denominations to reach out to racial minorities and advocating for better-trained police.

Obama referred to the opening on the National Mall last weekend of the Museum of African American History and Culture.

Asked by Rabbi Julie Schonfeld, who directs the Conservative movement’s Rabbinical Assembly, what he would describe as his achievements in the U.S.-Israel relationship, Obama listed his efforts to bolster Israeli security, including the recent 10-year defense assistance agreement.

He also listed the Iran deal, although he recognized that Israel opposed the deal, and said he regretted not being able to make greater progress on advancing Israeli-Palestinian peace.

Rabbi Elyse Wechterman of the Reconstructionist Rabbinical Association asked what Obama was doing to end the refugee crisis. He said the priority was ending the violence in Syria, but also noted his plans to bring in 110,000 refugees next year.