On 70th anniversary of Nuremberg trials, US attorney general lauds recognition of rape as war crime 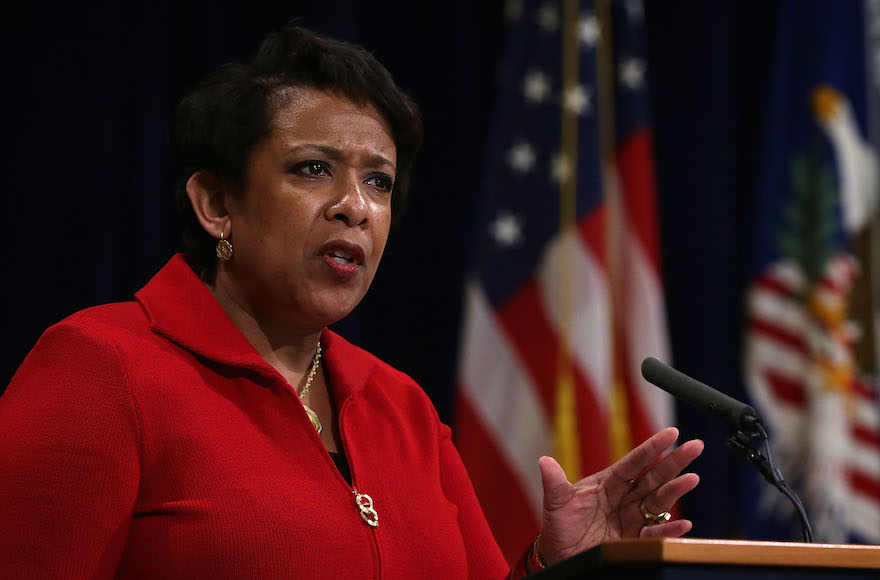 WASHINGTON (JTA) – Marking the 70th anniversary of the Nuremberg trials, U.S. Attorney General Loretta Lynch said the most important development in war crimes prosecutions since the trials was the recognition of rape as a war crime.

“One of the greatest advances of international criminal law over the last generation has been the recognition of gender-based violence as a war crime,” Lynch told JTA in an interview Friday.

The International Criminal Tribunal for Rwanda classified rape as a war crime as a result of rulings in the 1990s.

Lynch had spoken in Nuremberg on Thursday at the International Humanitarian Law Dialogues, a forum for practitioners and students of international law, at an event marking the 70th anniversary of the Nazi war crimes trials in that German city.  The trials, which held Nazi officials accountable for their genocide of Jews and other war crimes, formed the basis for current war crimes prosecutions.

The country’s chief law enforcement officer said the recognition of rape as a war crime, coupled with the proliferation of prosecutions, including against commanders in the Balkans, Sudan and the Republic of Congo, was a testament to how a younger generation of prosecutors was increasingly committed to justice.

When she attended law school, Lynch said, students exploring international law saw it as an avenue on “how to make money” through corporate law.

“Now most students talking about international law are asking how they can make a difference,” she said.

Lynch acknowledged discrepancies in the application of international law, where some alleged perpetrators are quickly caught and others – notably Sudanese leader Omar al-Bashir — are able to evade justice because of a network of friendly leaders who allow them to travel without being arrested.

“We have to constantly reinvent the ways we tackle this evil,” she said.

Lynch described as a great frustration the reality that it is easier to bring war criminals to justice after the fact than it is to stop their crimes, saying she would much prefer to be able to intervene.

“The nature of what we do as investigators and prosecutors perforce happens after the worst atrocities have been committed,” she said. “The human condition continues to spin out dictators and autocrats and people who live on the suffering of others.”

She would not speculate as to whether President Bashar Assad of Syria, the leader of the regime that has brutally repressed the uprising in his country, or the Islamists battling him would face war crimes in a conflict that has claimed nearly half a million lives over more than five years.

“I’ve been a prosecutor for a long time and I never want to forecast to anyone who may or not be within the ambit of any tribunal because you don’t alert them to that,” Lynch said.

“They would be hard-pressed not to be aware that their crimes have certainly gained international condemnation and they’ve gained international scorn. Right now we’re in the middle of the conflict and we have to see what develops, and also how things will be dealt with once that conflict is resolved,” she said.

“I do think that with the strong coalition of nations that are facing this issue in Syria, that ultimately we will prevail — it is my hope and my view. At the end of that conflict we will certainly have to assess and see how we deal with the perpetrators.”