Even as a teenager Supreme Court Justice Ruth Bader Ginsburg wasn’t afraid to speak her mind.

The Jewish jurist, who recently came under fire for dissing Republican nominee Donald Trump, penned an essay in her synagogue bulletin as a 13-year-old, urging congregants to rid themselves of hate and prejudice.

The essay is published in Ginsburg’s new book “My Own Words” (Simon & Schuster), which contains a collection of her speeches and writings as well as her thoughts on growing up in Brooklyn’s Midwood neighborhood.

Ginsburg (then known by her maiden name Bader) went to both Reform and Orthodox synagogues as a child, the book reveals, before her family found a good fit at the Conservative East Midwood Jewish Center. She wondered as a young girl why boys got to do a bar mitzvah at age 13, while “there was no comparable ceremony for me,” a struggle that may have shaped her into the gender equality advocate she is today. 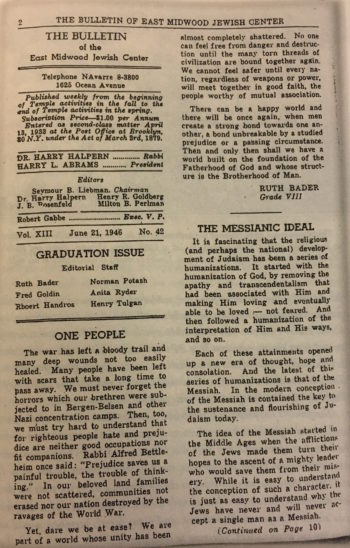 In the essay dated June 2, 1946, Ginsburg speaks of the deep scars the Jewish community had sustained from World War II, which had ended less than a year earlier, while she urges congregants not to fall victim to hate and prejudice.

The war has left a bloody trail and many deep wounds not too easily healed. Many people have been left with scars that take a long time to pass away. We must never forget the horrors which our brethren were subjected to in Bergen-Belsen and other Nazi concentration camps. Then, too, we must try hard to understand that for righteous people hate and prejudice are neither good occupations nor fit companions. Rabbi Alfred Bettleheim once said: “Prejudice saves us a painful trouble, the trouble of thinking.” In our beloved land families were not scattered, communities not erased nor our nation destroyed by the ravages of the World War.

Yet, dare we be at ease? We are part of a world whose unity has been almost completely shattered. No one can feel free from danger and destruction until the many torn threads of civilization are bound together again. We cannot feel safer until every nation, regardless of weapons or power, will meet together in good faith, the people worthy of mutual association.

There can be a happy world and there will be once again, when men create a strong bond towards one another, a bond unbreakable by a studied prejudice or a passing circumstance. Then and only then shall we have a world built on the foundation of the Fatherhood of God and whose structure is the Brotherhood of Man.