NEW YORK (JTA) – One has attended previous High Holiday services at an Orthodox synagogue on Manhattan’s Upper East Side.

The other has accompanied a college friend to Rosh Hashanah services at Stanford University, and her Jewish husband to services at a Reform temple in Midtown.

Inquiring minds want to know how the two potential First Daughters, Ivanka Trump and Chelsea Clinton, are celebrating the Jewish New Year. No matter whether the next president is named Clinton or Trump, a Jewish son-in-law is sure to visit the White House some time before next Rosh Hashanah.

Clinton isn’t Jewish but is married to Marc Mezvinsky, who is. And of course Trump became Jewish before her marriage a few years back to Jared Kushner, who has reportedly become one of his father-in-law’s closest advisers on all things Jewish- and Israel-related.

“That has never been the case before. Nor have we previously had ‘First Daughters’ who are themselves so close to Jews,” the preeminent historian of American Jewry, Jonathan Sarna, told JTA.

Trump underwent an Orthodox conversion and has told Vogue magazine about her family’s traditional Jewish home, including shutting off their electronic devices before Shabbat begins.

Mezvinsky wore a yarmulke and tallit at his wedding to Clinton, who was raised Methodist. “Chelsea believes that she can raise her children in multiple faiths,” said Sarna.

For Rosh Hashanah, she and Mezvinsky “will go to synagogue,” Rabbi James Ponet, who co-officiated their 2010 wedding along with a Methodist minister, told JTA. Now retired, Ponet was at the time the Jewish chaplain at Yale University. The ceremony included a wedding contract, or “ketubah,” and the traditional seven blessings were recited.

Ponet was unsure which congregation they might attend. “It’s not a close friendship but we’ve maintained some contact,” he said.

Clinton has long shown interest in Judaism. As a freshman at Stanford University in 1997, she attended Rosh Hashanah services at the Hillel there with a female friend. A year earlier, she reportedly attended Yom Kippur services at George Washington University Hillel, in Washington D.C. She was dating Mezvinsky at the time.

Before their wedding, Clinton and Mezvinsky had attended services at Central Synagogue, a Reform congregation in Midtown Manhattan. But current Rabbi Angela Buchdahl told JTA she hasn’t seen them there in about nine years.

Clinton has not attended services at any of the Reform and Conservative synagogues in the vicinity of their apartment on East 26th Street, calls to those congregations revealed.

“She is incredibly private about that part of her life and historically speaking it’s not something she talks about, because it’s between her and her family,” Hillary Clinton spokesperson Zara Rahim told JTA.

Of course, with a newborn son and the time pressures of campaigning on behalf of her mother, Democratic presidential nominee Hillary Clinton, some say this is a year she may not make it to synagogue. 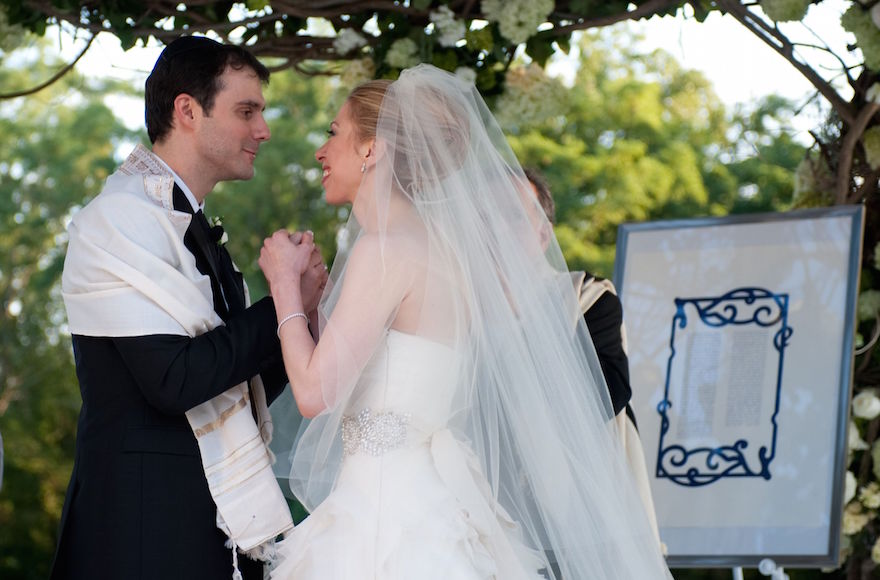 Trump, too, recently gave birth to a son, her third child, Theodore, who is now 6 months old. Her older children with husband Jared Kushner are Arabella, 5, and Joseph, 2.

Trump converted to Judaism in 2009 under the auspices of Rabbi Haskel Lookstein, a modern Orthodox rabbi and former spiritual leader of Congregation Kehilath Jeshurun on Manhattan’s Upper East Side.

The Trump-Kushners used to attend Kehilat Jeshurun on East 85th Street, but haven’t since they moved further downtown, to the East 60s, said Rabbi Lookstein, who declined to go into more detail.

Kushner’s family now attends the Fifth Avenue Synagogue on East 62nd Street when they are in Manhattan, Joseph Malovany, the synagogue’s cantor, told JTA, and he has seen Trump and her husband there. “Sometimes they come, sometimes they don’t come,” he said. “I don’t know what their plans are for the holiday.”

But the Trump-Kushner family also frequents a private synagogue hosted by the investor and philanthropist Ronald Perelman, which he had built between his two back-to-back townhouses on East 62nd and East 63rd Streets.

“I’ve sung there, he’s [Perelman is] a very close friend,” Malovany said. The Trump-Kushners “came with the children, so it was very nice. The question is whether they are even in the city for ‘yom tov.’ Usually the family gets together either in their home in [northern] New Jersey or at their home at the shore,” which is on the beach in Long Branch, New Jersey. “Sometimes they go to Israel, but probably not this year,” said Malovany, with a chuckle.

The candidate’s daughter “really ‘davens’ [‘prays’] with a lot of ‘kavannah’ [‘intention’],” said Malovany, who shared that he once saw Trump and Kusnher walking after Rosh Hashanah services to the East River for “tashlich,” the ritual of casting away of sins into a body of water. “She is a wonderful convert to Judaism with all the trimmings.”

Whatever their plans, the 2016 presidential campaign has offered revealing glimpses into the impact and ubiquity of interfaith marriage and Jewish identity, said Sarna, the Joseph H. & Belle R. Braun Professor of American Jewish History at Brandeis University.

“The impact of intermarriage on American Jewry’s future is both complicated and unpredictable. There are multiple possibilities, as the experiences of the Sanders, Trump and Clinton grandchildren illustrate, and the results are not at all preordained. What happens depends, much as the election itself does, on individual actions,” Sarna said.

“That may be the most important High Holiday lesson that this election offers us.