On Yom Kippur, atoning for our online sins 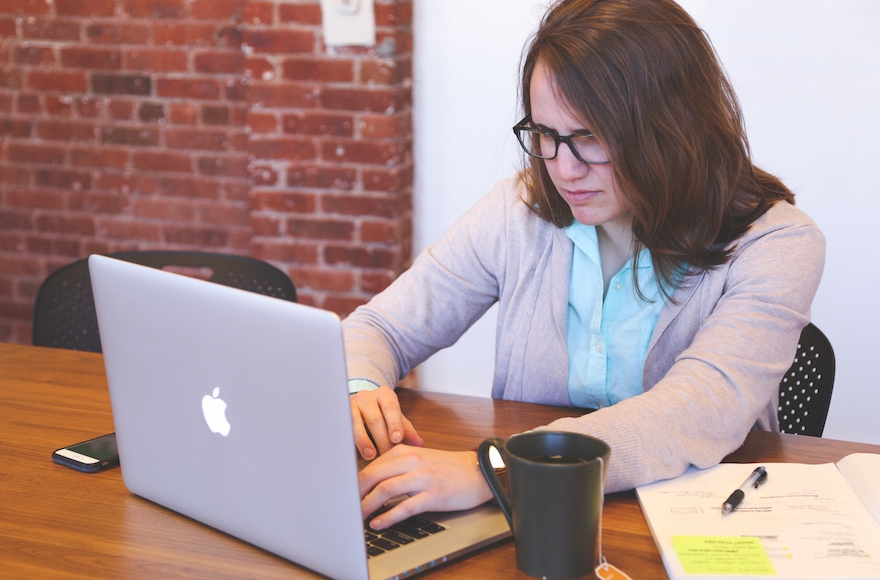 (JTA) — If you’re like me, you blog, read and share a lot of political stuff. But who really reads these posts and articles all the way through? Especially with the longer stories, who has time to look up the sources, or check if that odd photo was first posted on some sketchy partisan website?

Instead, we click and we skim; we copy and we paste.

But then comes Yom Kippur.

If we accept the accounting in the Talmud that says “Evil gossip kills three: the one who says it, the one who listens and the subject of the gossip,” we may need to ante up for an awful lot of headstones come Atonement Day.

The heart of the Yom Kippur liturgy is the Viddui, the two-part confessional composed of the shorter Ashamnu, an alphabetical acrostic of our wrongdoings, and the longer Al Chet, which explores, at length, the areas where we have fallen short.

When the Day of Atonement arrives, we will confess to both “unwillingly and willingly” acting out of arrogance, speaking ill of others and rashly judging others and gossiping. And in this year of extreme partisanship, that has me thinking: Has the season of politics gerrymandered our personal boundaries, reshaping the areas of shortcomings for which we need to ask forgiveness? Have we wittingly or unwittingly emailed unchecked “truths” — and sometimes checkered — to family, friends and people we don’t even know?

This summer, the problem hit home when a friend forwarded me an email breathlessly purporting to show that by comparison to previous first ladies, Michelle Obama and Hillary Clinton each had an unprecedented high number of paid White House staff. Not passing my sniff test, I looked it up on Snopes.com, a fact-checking website. I discovered the story was filled with false comparisons and easily researchable errors. Yet it was forwarded to me as if the truth.

Nothing to beat our chests over, you say? Or is it? When we wittingly or otherwise pass along something that damages the reputation of another — not that you have done it, but, um, somebody like you — is this something that we should confess, or make amends for, on Yom Kippur?

Many of us blindly (or with one eye open) resend or post links to all kinds of things. It seems harmless, makes us feel like we are with it, and our hearts (mine included) go all aflutter when our “friends” praise us even for the most outrageous stuff.

Posting or forwarding unchecked or unread articles may seem innocuous, but it’s not.

“The speed and ease with which utter personal destruction and irreparable social division — whether the result of malice, misinformation, or well-intentioned miscalculation — can be brought about through the transmission of words is staggering,” wrote Rabbi Daniel Z. Feldman in his book “False Facts and True Rumors: Lashon HaRa in Contemporary Culture.”

Speaking ill of others is known in Judaism as “lashon hara” —  evil speech or, simply, gossip. It represents the understanding that words can do real damage — quite unlike the “but words will never hurt me” maxim we learned as children.

And once that damage is done, how do you repair it? The classic example is of breaking open a feather pillow in the wind and then trying to recover all the feathers. Now imagine the wind as the internet, spreading the “feathers” to an almost infinite number of unknown destinations. There is no way to get them all back.

Sometimes lashon hara is permitted — for instance, when it is necessary to give information to someone whom you feel will be harmed without it. However, people who are concerned about lashon hara are scrupulous with their speech about others. In places where traditional Jews do business, it’s not unusual to see a sign that says “No Lashon Hara.”

While I don’t expect to see campaign signs dotting lawns with a similar message, perhaps a computer graphic saying “Stick to the Facts” would be useful at this time of year.

Being passive listeners or readers of gossip isn’t an excuse, either. According to Feldman, a person “who is on the receiving end of lashon hara must be careful not to act in a way that endorses or supports the offending speech. As such, we must evaluate to what degree clicking on websites, and all the more so linking to a website or distributing a link, acts as an extension and facilitation of the original message,” he wrote.

So how should we respond if we have fallen short online? Feldman observes that lashon hara “causes greater spiritual corruption to the offender than a standard transgression causes,” since it registers “a dual effect” — harming the subject and the speaker at once.

In addition “to the appeal for forgiveness from the victim,” he offers that the three “basic steps of general repentance are called for: confession, regret and commitment to better behavior in the future.” In other words, Feldman contends that the traditional response to lashon hara is equally applicable in the digital world.

But how exactly are online amends accomplished? Once these digital “feathers” are released, how do we get them back?

When someone needs to make amends for something they have said, most experts suggest a face-to-face apology, where responsibility is taken with no excuses. For those who we know that we have hurt online, I believe a face-to-face “please forgive me” — or at least a phone call — is very much in order.

Though a similar apology to our online minions seems a physical impossibility, I am wondering if, taking apologies into the digital age, amends could be made by posting a correction. And not just an “oops,” but a link to an analysis of the offending post that reveals its factual flaws, along with several sites useful for fact checking.

As election frenzy reaches its peak during the High Holidays, chances are the shoddily sourced story you forwarded won’t cause personal damage to a candidate; some big-time politician is probably not going to be affected by your post. But what about your reputation, and your relationship with your community? Attitudes, and possibly votes, may have changed as a result of your untrue post. An online apology won’t get all the feathers back, but it is a start in sewing up the pillow. And providing your list with the tools to fact-check in the future would be a move toward a more aware online community.

For some, confessing our online mistakes to our friends may be the hardest part. For others, it is acknowledging our shortcomings as part of Yom Kippur’s acts of atonement. On the Day of Atonement, it is custom that with each word or phrase of the Ashamnu we strike our chests. And this year, in particular, I am also going to apply the words from my prayer book to my own keyboard behavior: We transgress, we quarrel, we mock, we neglect, we gossip.

Indeed, in this new year, amid the heat of an election battle, we are probably all candidates for a keyboard confession.

(Edmon J. Rodman is a JTA columnist who writes on Jewish life from Los Angeles. Contact him atedmojace@gmail.com.)