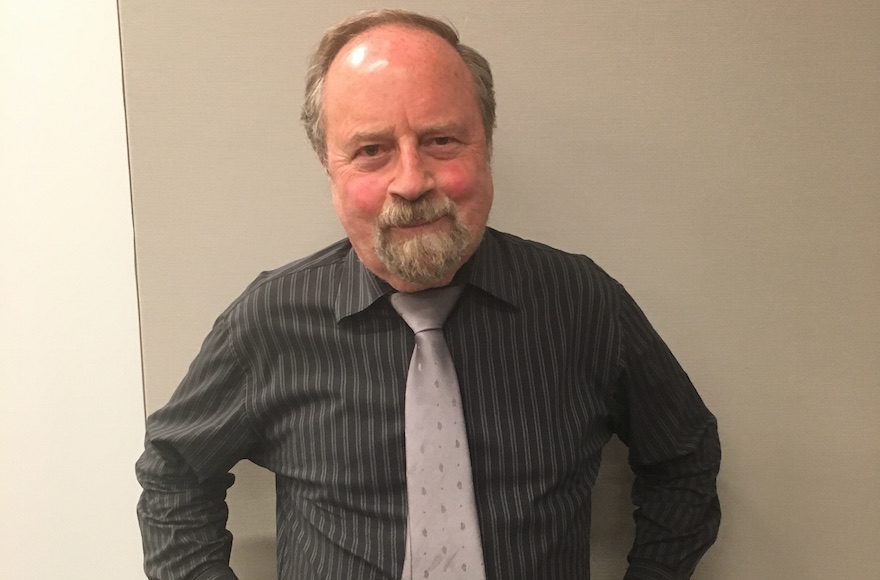 But Hershaft isn’t referring to the Syrian refugee crisis or discrimination against gay people in Russia. Rather, drawing upon his experiences during the Shoah, he insists that there are “striking similarities” between the horrors perpetrated by the Nazis and the way society today treats farm animals.

As an activist, Hershaft — who grew up in a secular Polish Jewish family and was forced to move to the Warsaw Ghetto at the age of 5 — makes the case that by not fighting for animals’ rights, our behavior is akin to that of German citizens who did nothing to stop the mass murder of Jews and other minorities.

“Millions knew about the death camps in their midst but pretended not to notice — just as we pretend not to notice factory farms, slaughterhouses and factories in our neighborhoods,” he told a New York audience of nearly 150 people at an event last month organized by the Jewish vegan advocacy group Jewish Veg.

His message has created tension with some members of the Jewish community, and Hershaft says he isn’t a welcome guest at Yom Hashoah ceremonies in most synagogues.

“Rabbis are always concerned about losing members in their congregation or losing their job,” he said.

Jewish groups have taken offense to the comparison. In 2003, Anti-Defamation League’s then director Abraham Foxman called a campaign by animal rights group People for the Ethical Treatment of Animals (PETA) that compared animal abuse to Nazism “outrageous” and abhorrent.” In 2009, Germany’s Supreme Court banned PETA from using photos of Holocaust victims alongside images of mistreated animals, a ruling upheld in 2012 by Europe’s highest human rights court.

Hershaft, 82, saw his family torn apart during the Holocaust. He and his mother were separated from his father during the war, never to hear from him again.

After spending five years in an Italian refugee camp, the pair was meant to settle in the United States, but when authorities revoked his mother’s visa, Hershaft went alone at his mother’s urging. His mother moved to Israel, but the distance was difficult.

“Why was I saved when so many good people weren’t?” Hershaft recalled asking himself. “How can I repay the debt for my own survival?”

The answers came unexpectedly, when as part of his job at an environmental consulting firm, he was sent to inspect a Midwestern slaughterhouse in 1972. There he came across piles of discarded animal body parts — reminding him of memories from the Holocaust.

Hershaft, who at that point was a vegetarian because he found the idea of eating a dead creature “kind of disgusting,” tried to put the image out of his mind. He couldn’t.

“I noted with horror the striking similarities between what the Nazis did to my family and my people, and what we do to animals we raise for food: the branding or tattooing of serial numbers to identify victims, the use of cattle cars to transport victims to their death, the crowded housing of victims in wood crates, the arbitrary designation of who lives and who dies — the Christian lives, the Jew dies; the dog lives, the pig dies.”

The incident spurred him to take action. In 1976, Hershaft founded the world’s first organization dedicated to championing the rights of farm animals, a cause that would become his life’s mission.

The group, which is known today as the Farm Animal Rights Movement, or FARM, raises awareness about abuse of livestock and advocates for veganism. It runs youth education programs, encourages reducing animal consumption and holds an annual animal rights conference.

Hershaft sees the links between animal rights activism and Judaism in his experience as a Holocaust survivor as well as Jews’ enduring relationship with social activism.

Jews are numerous among animal rights activists, said Jeffrey Cohan, executive director of Jewish Veg, for which Hershaft serves as an adviser and is a former board member. The pluralistic group encourages Jews to lessen animal consumption and strive toward a vegan lifestyle.

“Jews for the past 120 years or more have been overrepresented, relative to our proportion in the population, in every social justice movement, and thankfully this one is no exception,” Cohan told JTA.

Hershaft, who lives in Bethesda, Maryland, speaks to audiences across the world, both through Jewish Veg and FARM, urging them to distance themselves from the “oppression” of farm animals by adopting a vegan diet and refraining from using animal products.

It’s not always an easy sell.

“What I’m asking them to do is change their lifestyle three times a day,” he explained. “It’s not like supporting gay, women’s or civil rights, where all they have to do is stop discriminating.”

At the New York event, Hershaft’s slideshow contained gruesome black-and-white images of Nazi horrors — gas chambers disguised as showers and bony bodies dumped in a pile — and photos of baby chicks about to be killed and pigs in cages so small they can barely move.

“There aren’t that many people willing to listen to this kind of presentation because it doesn’t leave them indifferent,” he said. “It’s not something you just do casually, like your typical TED talk.”

Hershaft still works for FARM close to full time, and shows no signs of slowing down — in fact, he looks at least a decade younger than his actual age. He credits both his vegan diet and healthy lifestyle — including physical and mental exercise, as well as abstaining from drinking and smoking — for his youthful appearance.

For Hershaft, continuing his work provides a link to the past.

“The most fitting way to honor my family and people who perished in the Holocaust is to show that their sacrifice has not been in vain — that it has taught us a lesson,” he said. “The lesson it has taught me is that we’re always capable of oppression.”