These Jerusalem sukkahs are nicer than yours 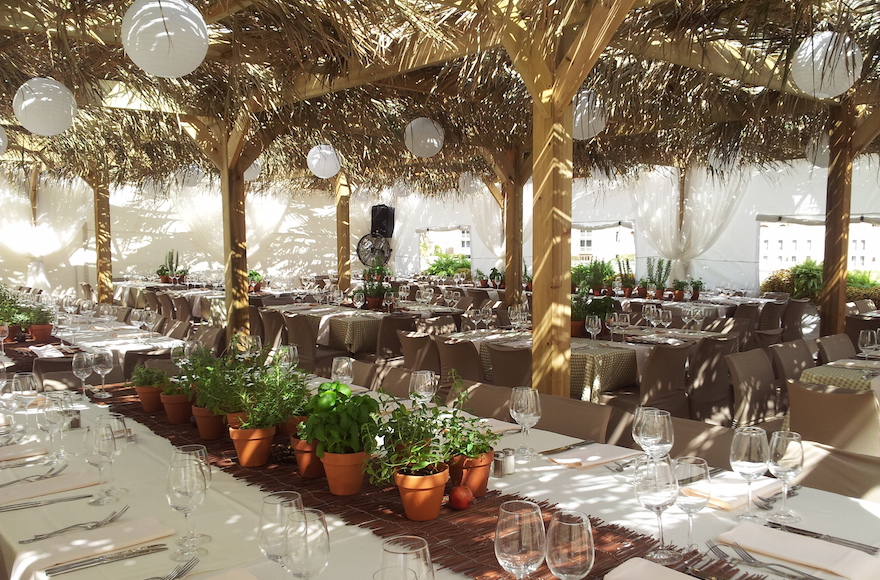 A 2012 sukkah from Studio Ya Ya for the Bible Lands Museum aims to take visitors back to ancient times, infusing temporary structure with natural woods and fresh herbs. (Courtesy of Yarok Yarok Events Design)
Advertisement

JERUSALEM (JTA) — Amit Zakoon’s flower business started with a seed — literally — but it quickly grew into one of Jerusalem’s premier purveyors of luxury sukkahs.

“We work for all the rich and famous,” Zakoon, the owner and CEO of Yarok Yarok Events Design, told JTA.

Studio Ya Ya, as Zakoon’s clients call the business, is known for executing weddings, bar/bat mitzvahs and parties for Jerusalem’s A-list, including visiting U.S. presidents (from Bush to Obama) to big-time philanthropists like the Bronfmans.

These kinds of upscale events may keep Zakoon and team busy year-round, but Sukkot (which is Oct. 16-23 this year) is Studio Ya Ya’s time to shine. The joyous festival, which commemorates both the harvest and the Exodus from Egypt, transforms Jerusalem: Thousands of pilgrims make their way to the Western Wall, sukkahs sprout on seemingly every balcony and celebrations are widespread throughout the city. 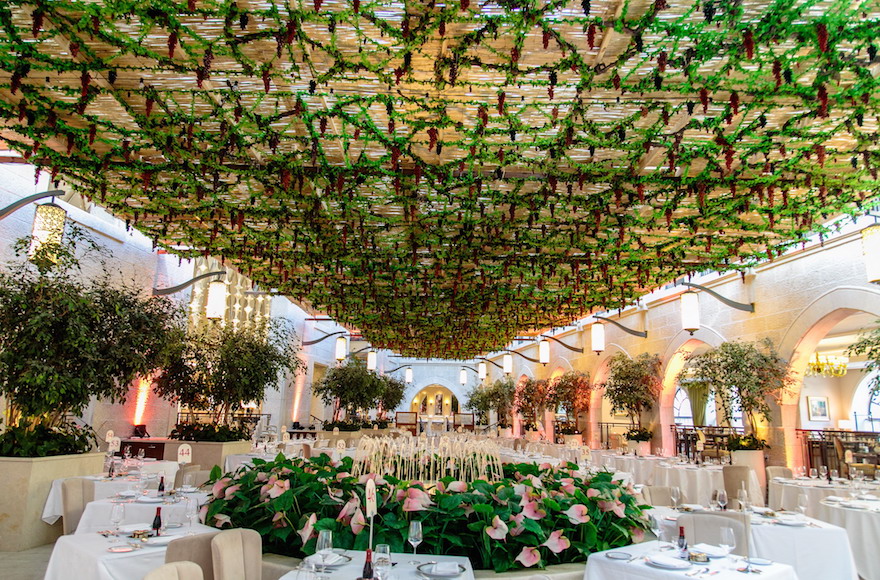 In 2015, this Studio Ya Ya-designed sukkah — one of four at the Waldorf Astoria Jerusalem — found inspiration in the atrium’s existing flowers and water fountain. (Courtesy of Yarok Yarok Events Design)

Studio Ya Ya designs many of Jerusalem’s largest and finest sukkahs, including those at the Waldorf Astoria, King David and Inbal hotels, as well as the president’s residence and the Bible Lands Museum. Over the years, its sukkahs have ranged from “biblical” — incorporating natural woods and fresh Jerusalem herbs into a design — to elegant, with a decor featuring strategically placed, plastic pomegranates painted in metallic shades.

“The sukkahs must be the most magnificent,” he said. “All the rich and famous come to the hotels, they come to their private second homes in Jerusalem and this holiday is one of the most important to them.”

For Zakoon and his team, that means the pressure is on. In addition to creating a visually stunning sukkah, the designers need to understand both the philosophical background of the holiday, as well as the legal requirements of building a kosher sukkah that will work for even the most religious guests.

“We can make an amazing design, but if it’s not kosher, it’s not worth one shekel,” Zakoon said.

For example, the sukkah’s “roof,” or “schach,” must be made of predominantly natural ingredients, said Rabbi Morey Schwartz, director of education for the Florence Melton School of Adult Jewish Learning. The schach should provide more shade than sun, be open enough to see the stars — or at least that you’d get wet if it started to rain.

While his clients may see rain as a blessing, for Zakoon it presents a challenge: He can’t use paper displays, paintings or any material that could be destroyed by the elements. 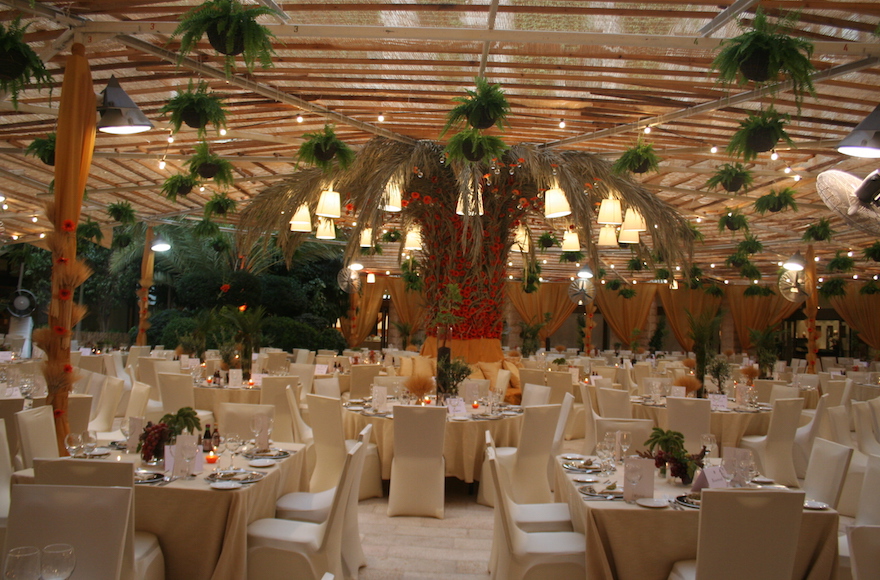 The sukkah designed by Studio Ya Ya in 2010 for the Inbal Jerusalem Hotel employed a massive, palm tree centerpiece threaded with tiny red flowers. (Courtesy of Yarok Yarok Events Design)

The length of the decorations is also a consideration. Those up to 12 1/2 inches can be considered part of the schach, but anything longer is considered something separate, which could present a problem — those in the sukkah must be sitting under the schach. Thus longer decorations need to be very narrow. Ya Ya uses thin ribbons, for example, to add length but avoid conflict with Jewish law, and hangs larger decorations or lights directly above the tables, so visitors don’t risk sitting under them.

It’s not enough to get the details mostly right — Ya Ya’s design manager, Noa Kirshberg, said at some hotels, a rabbi gets on a ladder and takes exact measurements.

Fortunately, Jewish law doesn’t preclude stunning sukkahs — Kirshberg shows a reporter an album filled with photos of scrambling grape vines that were used to accent the Waldorf’s sukkah one year, to tables strewn with vases full of corn poppies and daffodils leveraged in a private home.

Studio Ya Ya starts planning for Sukkot as early as a year in advance. But when the holiday actually arrives, so does another challenge: While the structures can be erected ahead of time, the sukkahs cannot be decorated far in advance because the flowers will wilt.

Since Studio Ya Ya designs and maintains as many as 20 sukkahs — ranging in size from nine to 4,900 square feet — Zakoon hires up to 40 freelancers, who work round the clock in the days leading up to the holiday. Because flowers cannot be maintained on yom tov — the first one to two days of the holiday, with laws similar to those of Shabbat – the Ya Ya team rotates among its sukkahs on the interim days to change out arrangements and freshen up anything that has shifted.

Another consideration? Repeat customers. Kirshberg noted that because hotels tend to get the same visitors year after year, Ya Ya aims for a fresh design annually.

Also, each of the hotel’s sukkahs must be unique and match the hotel’s existing ambiance.

“The Waldorf is luxurious and the King David is traditional,” she said.

Studio Ya Ya’s hard work doesn’t just enhance the experience for hotel and museum guests, said Schwartz — the company is doing a mitzvah, too.

“Beautification is considered greater sanctification of God’s name,” he said.