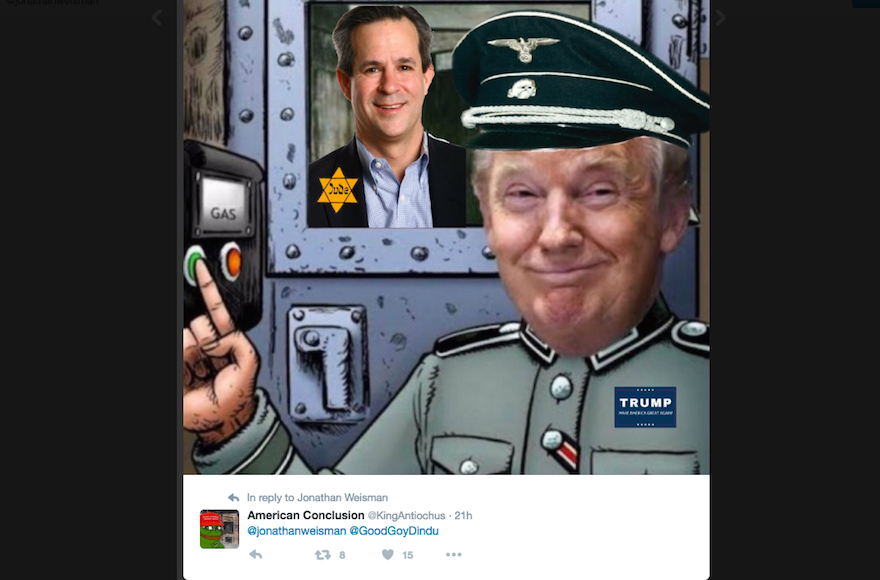 (JTA) — An Anti-Defamation League task force tracking a “spike” in online harassment of journalists credited self-identified supporters of Donald Trump with the lion’s share of the anti-Semitic tweets aimed at reporters and broadcasters.

While emphasizing that the study does not imply that the Republican presidential nominee’s campaign supports or endorses the Twitter activity, the task force noted that the terms that appear most frequently in the bios of the 1,600 Twitter users who account for more than two-thirds of the anti-Semitic tweets aimed at journalists are “Trump,” “nationalist,” “conservative” and “white.”

The study saw a significant uptick in anti-Semitic tweets from January to July as coverage of the presidential campaign intensified.

The report identified 2.6 million anti-Semitic tweets between August 2015 and July 2016 with an estimated reach of 10 billion impressions, which the task force believes “contributed to reinforcing and normalizing anti-Semitic language – particularly racial slurs and anti-Israel statements — on a massive scale.”

Of those 2.6 million tweets, ADL focused its analysis on tweets directed at 50,000 journalists in the United States, finding 19,253 anti-Semitic tweets directed at them. Of those, a disproportionate number were directed at a small number of journalists. The top 10 most targeted journalists, who received 83 percent of the overtly anti-Semitic tweets, were all Jewish, including columnist Ben Shapiro of DailyWire.com, Tablet’s Yair Rosenberg, The Atlantic’s Jeffrey Goldberg, The New York Times’ Jonathan Weisman, CNN’s Sally Kohn and Bethany Mandel of the New York Post.

The ADL said it will provide a list of offending accounts to Twitter; the social media platform has previously deactivated 21 percent of the accounts responsible for the tweets aimed at journalists.

“The spike in hate we’ve seen online this election cycle is extremely troubling and unlike anything we have seen in modern politics,” Jonathan Greenblatt, the ADL’s CEO, said in a statement. “A half century ago, the KKK burned crosses. Today, extremists are burning up Twitter. We are concerned about the impact of this hate on the ability of journalists to do their job and on free speech, which is why we established this Task Force.”

While much of the online harassment of journalists was sent anonymously, the ADL noted that they originated with a number of overlapping “communities” associated with the alt-right and white nationalist movements. It also identified two neo-Nazis responsible for some of the attacks: Andrew Anglin, founder of the white supremacist website “The Daily Stormer,” and Lee Rogers of Infostormer (formerly The Daily Slave).

“While both are banned from Twitter, they have encouraged their followers to tweet anti-Semitic language and memes at Jewish journalists,” according to the task force.

The advisers to the ADL Task Force on Harassment and Journalism are Mandel; Danielle Citron, professor of law at the University of Maryland; Steve Coll, dean of the Columbia University Graduate School of Journalism; Todd Gitlin, professor and chair of the doctoral program at Columbia Journalism School; Brad Hamm, dean of the Medill School of Journalism at Northwestern University; Shawn Henry, retired executive assistant director of the Federal Bureau of Investigation, and Leon Wieseltier of The Atlantic and the Brookings Institution.