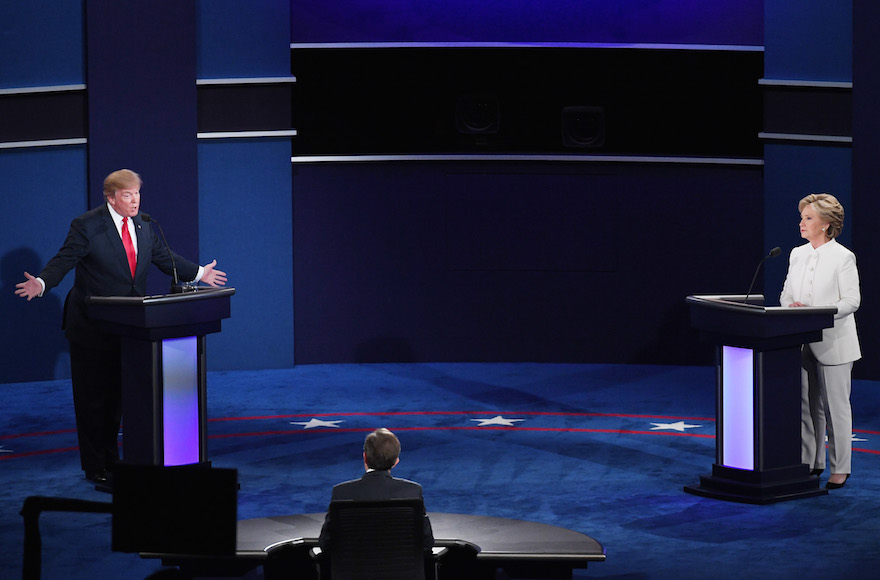 Donald Trump wants to keep us in suspense.

The Republican nominee’s refusal to say Wednesday evening during the final debate whether he would accept the results of the election is the stuff of breaking news and six-column headlines.

“What I’m saying is that I will tell you at the time, I will keep you in suspense,” Trump said. Hillary Clinton, his Democratic rival, called his promise “horrifying.”

It is unprecedented in U.S. presidential elections for a nominee to not pledge to respect the outcome.

What did Trump mean by “suspense”? Who truly knows – his aides were quick to insist that he would indeed respect the results.

Clinton has been reticent about making Iran a major issue throughout the campaign: It’s a hard straddle for her between her skepticism of the nuclear deal reached last year and honoring the legacy of President Barack Obama. (Her running mate, Sen. Tim Kaine, D-Va., was a prominent backer of the deal, and in a rare tonal differentiation from Clinton, has emphasized the deal as a win.)

Yet she was the first to mention Iran in the final debate on the University of Nevada, Las Vegas campus. It was one of several cudgels she used to depict Trump as beholden to Russia. Her most prominent gambit was in goading him to condemn Russia’s responsibility for the hacks into the private emails of her associates as unprecedented interference in the U.S. election. That led to this notable exchange:

Clinton: Well, that’s because he’d rather have a puppet as president of the United States.

Clinton worked in her Iran reference when she circled back to Russia a few questions later, after moderator Chris Wallace of Fox News Channel pressed the Democratic nominee on her plans to defeat the Islamic State, the terrorist group also known as ISIS that controls swathes of land in Syria and Iraq.

“I am hopeful that the hard work that American military advisers have done will pay off and that we will see a real — a really successful military operation,” she said, referring to the thrust underway against ISIS in Mosul, the group’s stronghold in Iraq. “But we know we’ve got lots of work to do. Syria will remain a hotbed of terrorism as long as the civil war, aided and abetted by the Iranians and the Russians, continue.”

This was a subtle – probably too subtle – reference to Trump’s suggestion in the second debate that the United States may as well concede Syria to Russia and Iran, a prospect that horrifies Israel and the pro-Israel community. (It was Wallace, not Clinton, who later in the debate cornered Trump on his views on Syria, Russia and ISIS.)

But Clinton’s reference to Iran, and to Mosul, gave Trump the opening for one of his most cogent and damaging arguments against the Obama administration’s foreign policy, and the opportunity to tie it to a prospective Clinton presidency. The assault on Mosul, Trump argued, may be successful, but ultimately it would be a gift to Iran, which he depicted as the prevailing power in Syria and Iraq. And that’s when he brought in the deal, reviled by Republicans as well as by Israel’s government, which exchanged sanctions relief for Iran to a partial rollback in its nuclear program.

Trump: So Mosul is going to be a wonderful thing. And Iran should write us a letter of thank you, just like the really stupid — the stupidest deal of all time, a deal that’s going to give Iran absolutely nuclear weapons. Iran should write us yet another letter saying thank you very much because Iran, as I said many years ago, Iran is taking over Iraq, something they’ve wanted to do forever, but we’ve made it so easy for them. So we’re now going to take Mosul. And do you know who’s going to be the beneficiary? Iran.

He was at it again Wednesday and it’s always hard what exactly to make of it. He also cites Jewish names (Israeli Prime Minister Benjamin Netanyahu, his son-in-law Jared Kushner) in a positive way to reinforce his arguments, and the Jewish folks he derides, he has genuine beefs with.

On the other hand, Trump seems to subtly emphasize the names – and that coupled with his invocations of grand secret conspiracies is guaranteed to make folks nervous.

The first mention Wednesday went to Ruth Bader Ginsburg, the Supreme Court justice who attacked Trump this summer as a “faker” and then apologized. He cited her as the kind of justice he would definitely not appoint.

Trump: Something happened recently where Justice Ginsburg made some very, very inappropriate statements toward me and toward a tremendous number of people, many, many millions of people that I represent. And she was forced to apologize. And apologize she did. But these were statements that should never, ever have been made.

It’s a legitimate reference, but also emblematic of Trump’s tendency to swerve into personal affronts when he should be dealing with issues. Ginsburg’s attack on him seemed to take precedence, in his mind, over how she and others would rule on abortion and on gun laws.

The second Jewish name check was George Soros, the financier who backs an array of liberal causes. It came up when Clinton attacked Trump for not paying his fair share of taxes.

Trump: So let me just tell you very quickly, we’re entitled [to tax breaks] because of the laws that people like her passed to take massive amounts of depreciation on other charges, and we do it. And all of her donors — just about all of them — I know [Warren] Buffett took hundreds of millions of dollars, Soros, George Soros, took hundreds of millions of dollars … Most of her donors have done the same thing as I do.

Refugees these days are seldom Jewish, but the issue remains a priority of an array of Jewish groups, particularly HIAS, the immigrant activist group.

Faulting Obama (and by extension, Clinton) for the carnage in the Syrian city of Aleppo, Trump pivoted to the entry of Syrian refugees into the United States, something Clinton has said she wants to expand.

Trump: She’s taking in tens of thousands of Syrian refugees, who probably in many cases — not probably, who are definitely in many cases, ISIS-aligned, and we now have them in our country, and wait until you see — this is going to be the great Trojan horse. And wait until you see what happens in the coming years. Lots of luck, Hillary. Thanks a lot for doing a great job.

The “Lots of luck” stirred a social media hornet’s nest – the “tens of thousands” of refugees will arrive only if Clinton is elected. Was Trump, behind in the polls, in a Freudian way, conceding?

In any case, here’s how Clinton responded:

Clinton: He’s made these claims repeatedly. I am not going to let anyone into this country who is not vetted, who we do not have confidence in. But I am not going to slam the door on women and children. That picture of that little 4-year-old boy in Aleppo, with the blood coming down his face while he sat in an ambulance, is haunting. And so we are going to do very careful, thorough vetting. That does not solve our internal challenges with ISIS and our need to stop radicalization, to work with American Muslim communities who are on the front lines to identify and prevent attacks.

Jewish immigration advocates, led by HIAS, back Clinton’s argument – refugees coming into the United States are vetted, they say, to a fault, with the process lasting up to two years. Most Jewish groups would also be aghast at Trump’s certainty that “in many cases” the refugees are “definitely ISIS-aligned.” For them it smacks of the nativists who in the 1920s and ’30s insisted that Jews fleeing Europe did not have American interests at heart. (On the other hand, hawkish groups believe Syrian immigrants “pose a grave danger to all Americans – and an even greater danger to American Jews,” as the Zionist Organization of America has put it.)

Trump: It’s a criminal enterprise. Saudi Arabia giving $25 million, Qatar, all of these countries. You talk about women and women’s rights? So these are people that push gays off business — off buildings. These are people that kill women and treat women horribly. And yet you take their money.

That’s a bizarre gambit for a developer who has extensive dealings with the same folks.