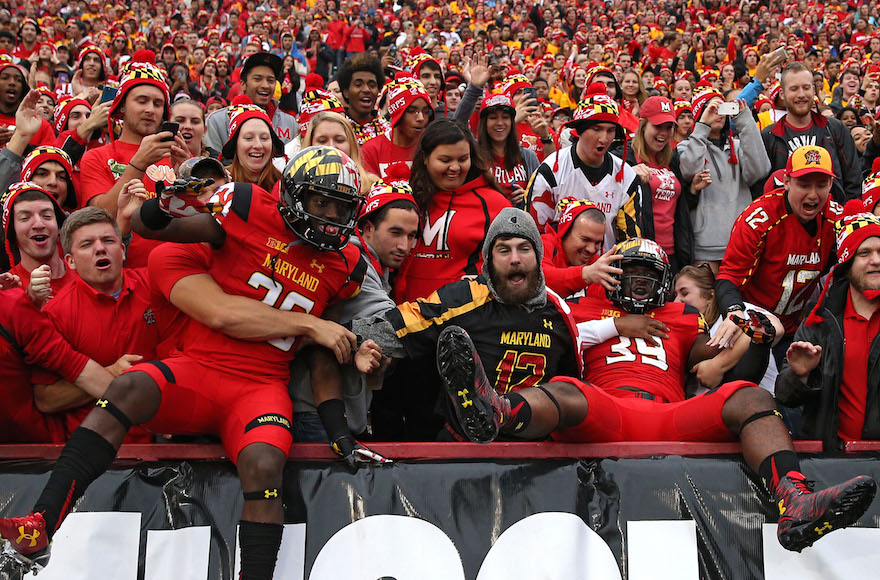 It can be difficult to be a Shabbat-observant Jew and a college football fan. The majority of NCAA football games are held on Saturdays, the day of the week when the activities of observant Jews are strictly limited. Watching a game on TV, for instance, is not allowed.

But what if one wants to attend a game in person? Shabbat laws prohibit the use of electricity or travelling by motor vehicle, but they don’t prevent one from walking to a game and taking in the action from a seat like any other fan.

The main obstacle, however, comes at an unexpected juncture: the entry gates. Having one’s ticket swiped by the kind of electronic scanner found in most stadiums counts as using electricity.

The University of Maryland — home to one of the biggest Jewish student populations in the country — now offers a workaround. As Mitzpeh, the school’s independent Jewish newspaper, reports, the university allows students to obtain wristbands (instead of traditional tickets that require scanning) days before Shabbat (because any kind of economic transaction — like buying a ticket — is also prohibited on the holy day).

There will always be some gray areas at a game, such as the inescapable jumbotrons that broadcast the action happening below. As one of Maryland’s Hillel rabbis, Aderet Drucker, told Mitzpeh, some Jews will see the giant TV screens as a deal-breaker while others will be happy that they can watch a screen on Shabbat without having to turn it on themselves. (It’s the initiation of an electrical current that is strictly forbidden.)

This Saturday, Maryland will host its only home night game of the season in a much-anticipated matchup against Big 10 rival Michigan State. Maryland’s team has a surprisingly strong 4-2 record midway through the season; Michigan State is 2-4. The game starts after Shabbat.