Cubs vs. Indians: Which team is more Jewish? 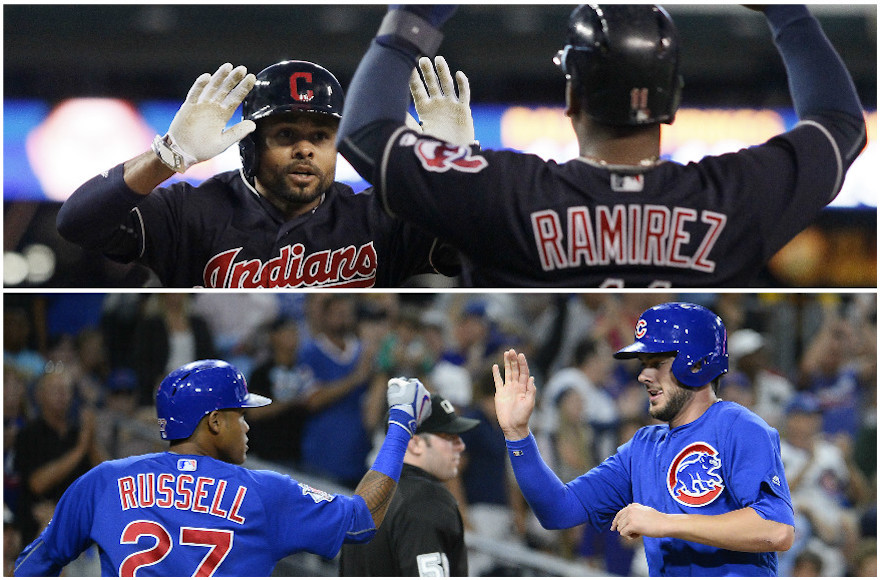 (JTA) — The Cleveland Indians play host to the Chicago Cubs on Wednesday night in Game 2 of the World Series hoping to build on their 1-0 lead. Will Indians reliever Andrew Miller have enough juice to shut down the Cubbies again? Can Cubs pitcher Jake Arrieta return to his early season form and get the National League champions even? Which franchise will move closer to ending its historic Series drought?

But we have another question: Which team is more Jewish?

Both clubs have long-suffering fans. The Indians last won the championship in 1948, and their most recent Series appearance, in 1997, ended in heartbreak: The Tribe lost to the Florida Marlins in extra innings of Game 7 after leading in the ninth inning. The Cubs have an even longer record of futility: It’s been 107 seasons since they won the World Series. Before this year, the last time they appeared in the Fall Classic was 1945.

So which team should the Chosen People choose? Two fans make their cases:

During the Jewish fall festival of Sukkot, the Cubs slaughtered a billy goat.

In  1945, a disgruntled fan allegedly cursed the Cubs after he was kicked out of Wrigley Field with his pet goat. And for seven decades, the Curse of the Billy Goat held. Despite a handful of promising seasons and playoff appearances, the Cubs never again advanced to the World Series.

Until a Jewish hero arrived to return the team to greatness.

Theo Epstein, its president of baseball operations, came aboard in 2011 and built a squad that won a major league-leading 103 games this year — the franchise’s best mark since 1910.

On Saturday night, the final day of Sukkot, Epstein’s team accomplished the seemingly impossible: With a shutout of the Los Angeles Dodgers, the Cubs advanced to their first World Series in 71 years while breaking the curse.

But long before Epstein, the Jew and the Cubs fan were kindred spirits: The Jew laments the exile of 2,000 years. The Cubs fan mourns more than a century without a World Series win. The Jew remembers death and destruction — in Spain, Russia, Poland and Germany. The Cubs fan remembers seasons snatched away — in 1945, 1969, 1984 and 2003.

The Jew holds strong to tradition — fasting on Yom Kippur, recounting the Exodus at Passover, abstaining from pork and shellfish. The Cubs fan stays true to custom — waving the W flag, throwing back opponents’ home run balls, pounding Old Style beer and singing “Take Me Out to the Ball Game.”

Now, just as the Jews just finished a series of holidays heralding a new year, the Cubs hope to finish a series by ending professional sports’ longest championship drought.

The Cleveland Indians are the most Jewish team in baseball. All Indians fans, in fact, are MOT, or Members of the Tribe.

The most prominent Jewish member of the Tribe was slugger Al Rosen, called “The Hebrew Hammer,” who spent his entire career from 1947 to 1956 with the Indians. He also refused to play on the High Holidays and threatened to fight the myriad of opposing players who slurred him for being Jewish. Hank Greenberg, the best Jewish hitter of all time, became the team’s general manager after retiring in the late 40s.

In 2002, Mark Shapiro was named general manager. In 2010 he became the team’s president, a job he held for five years. He currently holds that job in the Toronto Blue Jays organization (so the Blue Jays’ American League Championship Series against the Indians, in the playoffs’ last round, had to have hurt). The GM now, Mike Chernoff, also is Jewish.

For 14 years, beginning with its inaugural season in 1994, Jacobs Field was the home stadium of the Indians. Though it has been renamed Progressive Field (for the Cleveland-based Progressive Insurance Company, helmed for 35 years by Jewish philanthropist Peter Lewis), the park is still referred to by many fans as “the Jake.”

The Indians have had a kosher hot dog stand at their field for more than 15 years and hold an annual Jewish community night that draws hundreds of Jewish fans and fans of Jews to the downtown Cleveland venue.

Cleveland Jewish News columnist Regina Brett pointed out in an article on Tuesday that while Chicago Cubs baseball has had a longer record of futility than the Indians, it is indeed Cleveland sports fans who have suffered the longest.

Before the Cleveland Cavaliers won the NBA championship four months ago, no Cleveland sports team had held a title since the Browns of the National Football League in 1964.

As Brett writes: “Yes, the Cubs haven’t won a World Series since 1908. But Cleveland sports fans endured ‘The Catch,’ ‘The Drive,’ ‘The Shot,’ ‘The Fumble,’ ‘The Move’ and more, while Chicago fans were celebrating the following litany of sports victories … The Bears’ Super Bowl in 1985. The White Sox World Series in 2005. The Chicago Bulls’ six NBA titles between 1991 and 1998.  The Chicago Blackhawks’ six Stanley Cups. The last one was in 2015.

“People, that was LAST YEAR, so no crying in your Coors for the Cubs when they lose to the Tribe.”