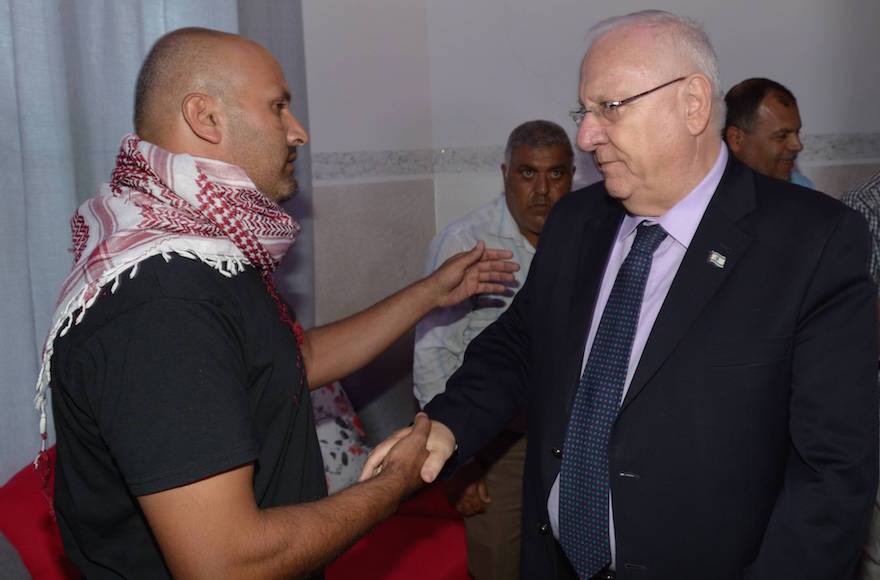 (JTA) — President Reuven Rivlin of Israel visited the family of the 15-year-old boy who was killed by shots fired on the Israel-Egypt border.

“We are all citizens of the same country, we have come to share in your profound grief,” Rivlin said during his visit to the home of Nimer Abu Amar in the predominantly Bedouin village of Lakiya in southern Israel on Thursday morning, two days after the teenager was killed.

“We are all equal in this country and there is no difference between a child from Lakiya or from Tel Aviv, Jerusalem or Haifa. The Ministry of Defense treats a child from Lakiya in exactly the same way as it would any other child, and we will check and follow closely after this tragic incident.”

The victim’s father, Bassam Abu Amar, said he is confident “that the Ministry of Defense will pursue justice and investigate the issue.”

Nimar was working for a civilian subcontractor hired by Israel’s Defense Ministry pouring coffee for other workers along the border when he was shot and killed on Tuesday afternoon. An Egyptian soldier shouted at him to return to the Israeli side before firing at him, witnesses told The Times of Israel. The Israel Defense Forces said an investigation into the incident is ongoing.

The Abu Amar family told Rivlin that no Defense Ministry officials attended the funeral on Wednesday even though the family has served in Israel’s security forces for generations, The Times of Israel reported.

“We have been working with the security establishment for generations, and we will continue to serve the country and work along the borders,” said Nimer’s uncle, Fares Abu Amar. “We are confident that the Ministry of Defense will investigate and draw the necessary conclusions. Our child is yours as well as ours – there is no question about that.”