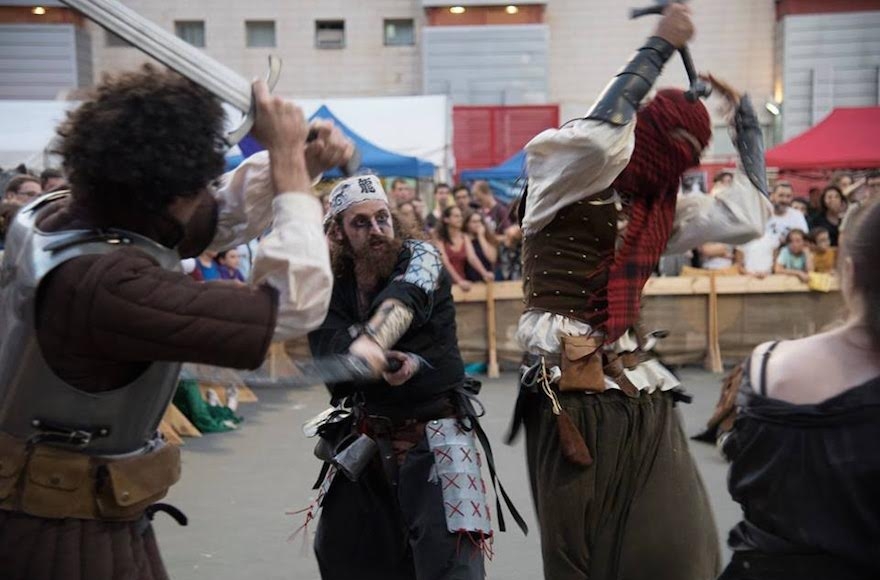 TEL AVIV (JTA) – As a kid, Ben Engelman dreamed of being a warrior.

Until he was old enough to join the Israeli army, he settled for role playing as a sword fighter. Now 25, Engelman has been to war in Gaza and finished his service in a special forces unit. But he hasn’t stopped play fighting.

“This is how I imagined fighting growing up. There’s glory but no blood,” he told JTA last week moments after mauling an adversary with a foam sword. “Real war isn’t fun or glamorous. It’s yuck.”

When not engaged in combat, Engelman oversaw the fighting arena at the Icon Festival, the largest science fiction and fantasy event in the country. He was one of thousands of Israelis who turned out last week to share a love of alternate realities — and to temporarily escape the sometimes harsh one they live in.

“It’s a great form of escapism, and a great form of entertainment,” Tomer Shalev, 34, the general manager of Icon and a finance manager in real life, told JTA. “Sci-fi and fantasy let you do things can’t do in real life: put on a mask, pretend you’re on the deck of the Starship Enterprise or fight like knights in the Middle Ages.

“At Icon, we geeks are giving people a three-day peek into our hobbies and into our hearts. I think we got it right because each and every year we get more people.” 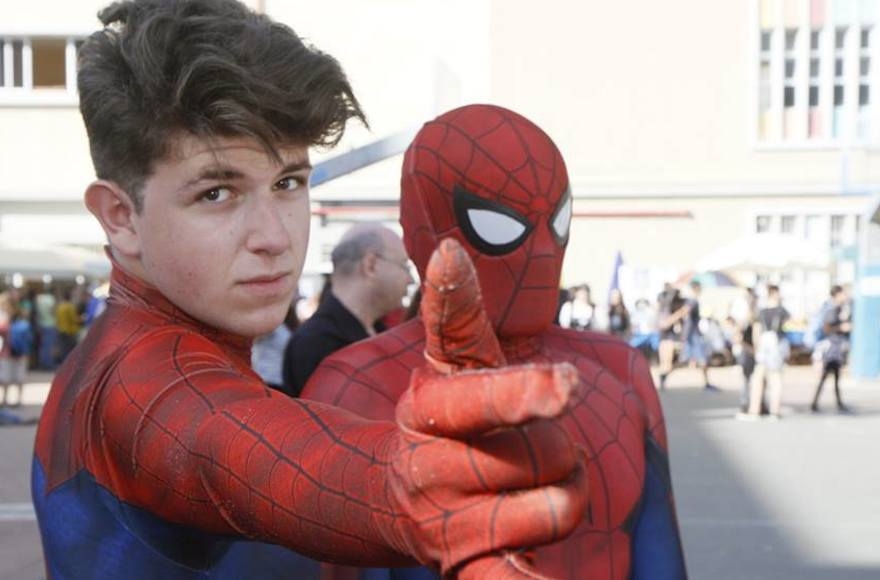 The man who delivered the filk lecture was Eugeny Reznikov, a 33-year-old programmer from Herzliya.

In the outdoor plaza between the two buildings, dozens of booths offered paraphernalia like comic books, fantasy and sci-fi novels and anime jewelry. Harry Potter-style wizard wands could be had for a price.

Most of the festival’s visitors were in their teens or 20s, many in costume as their favorite fictional character. The supervillains from this summer’s “Suicide Squad” film, based on the DC Comics characters, were especially well represented.

Engelman spent his time in the fighting arena, a section of a basketball court marked off by a wooden barrier and affectionately called “the Colosseum.” Homemade foam weapons were available to the public for rent, and duels between friends, parents and children, and strangers raged throughout the day. 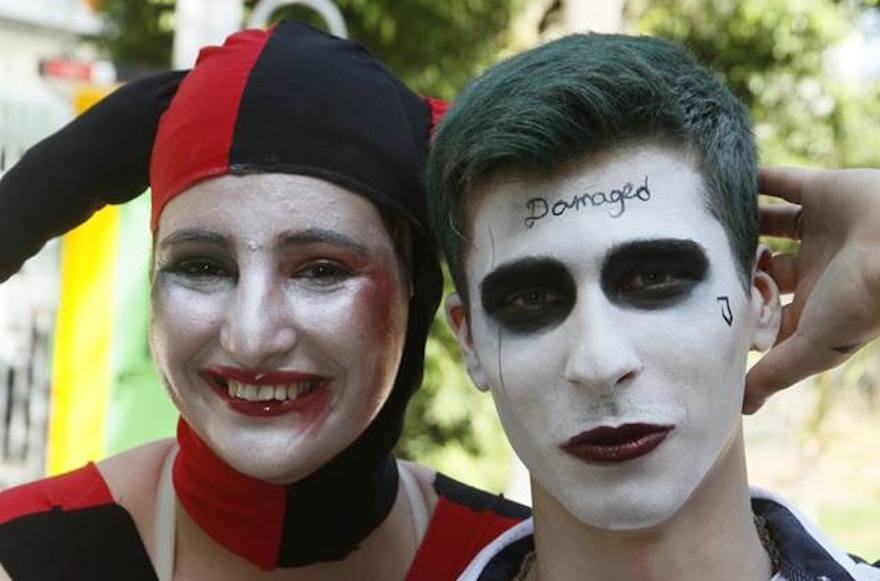 On the last day of the festival, a teenager in faux-chain mail parried blows from a boy in a knitted kippah, whose side locks flew as he swung a massive battle ax. Nearby, women in character as medieval bar maids served soda and snacks in the “Inn” tent.

Together, the structures comprised Icon’s outdoor live-action role-playing area, or LARP, under Engelman’s management. Outdoor LARP is essentially make-believe that you don’t have to grow out of. Players interact as characters in created fantasy worlds that can include customized clothing, props, buildings and even currency. On Oct. 20, the world was based in the Middle Ages, hence the knights and bar maids.

Haggai Elkayam, 28, a former chairman of the Israeli Role Playing Society and a social psychologist, said Israel has a strong and growing role-playing scene. The country has even created its own type of tabletop game, which gives the game master the power to shape players’ interactions, not just the fantasy world, with the aim of creating specific emotional responses in them.

In one tabletop game, a game master successfully made immigrants to Israel from the former Soviet Union so nostalgic they left the game crying “because they missed their childhood summer camps in Moscow,” according to Elkayam.

“Role-playing games take sci-fi and fantasy one step further,” he said. “You don’t just take a peek into another world. You enter it. We call it the best hobby in the world.”

Engelman was initially drawn to the fighting aspect of LARP. Growing up, he admired his brother, who was 10 years older and a fighter in the Israel Defense Forces. He took judo and Krav Maga classes, and when he was 13, he came across the same fighting arena at Icon that he now manages. He was immediately hooked.

During his service in the Egoz commando unit, Engelman put LARPing on hold. What little free time he had was spent with his family or girlfriend.

“You don’t have time to invest an entire weekend in pretending because you want to actually live,” he said. 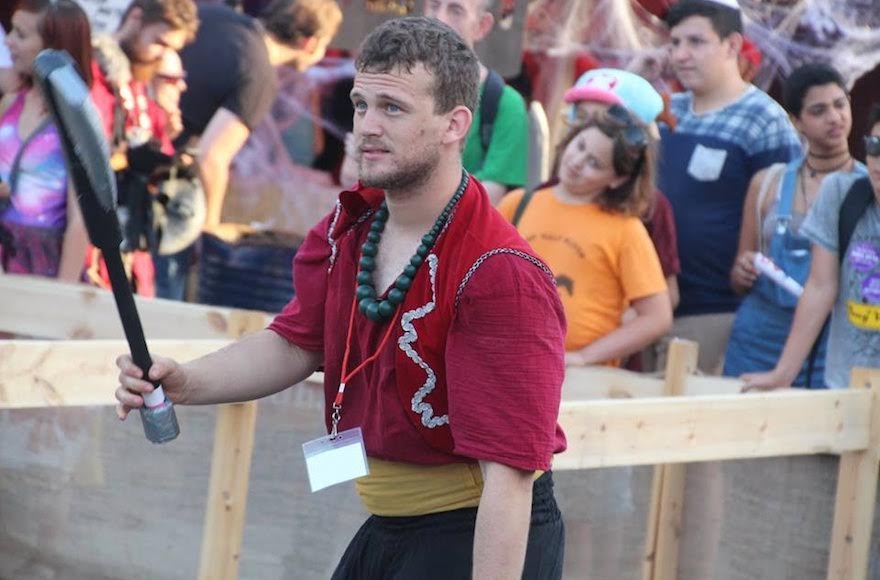 But when he was discharged in 2014, soon after taking part in Israel’s offensive in the Gaza Strip, he returned to the LARP community. Though Engelman is busy these days studying at Israel’s prestigious Technion university, he finds time for his hobby. He participates in both outdoor and room LARPs.

“It’s definitely a form of escapism, and we’re in Israel, so it’s an escape from the Israeli reality. But people do this all over the world. So I guess everyone has things to escape from,” he said, noting that the “friendly and warm” community is part of the draw.

Michal Kapuller, a 17-year-old high school student from Ashkelon in southern Israel, was working the Inn on Oct. 20 in medieval costume and Gothic face paint. She said LARPing helped her cope with real life.

“Most of us geeks are bullied at school for being different. So people are really supportive of each other,” she told JTA. “I’m really shy in real life. But in character, I’m not shy. Doing this, I’ve discovered new parts of my personality and developed myself. Stuff like that.”

Kapuller recalled that ahead of the 2014 Gaza war, rocket sirens went off in the middle of an outdooe LARP she was part of. Rather than breaking character, she said, everyone pretended like it was part of the game.