The Jewish vote: Pot, guns, justice and other ballot measures worth noting 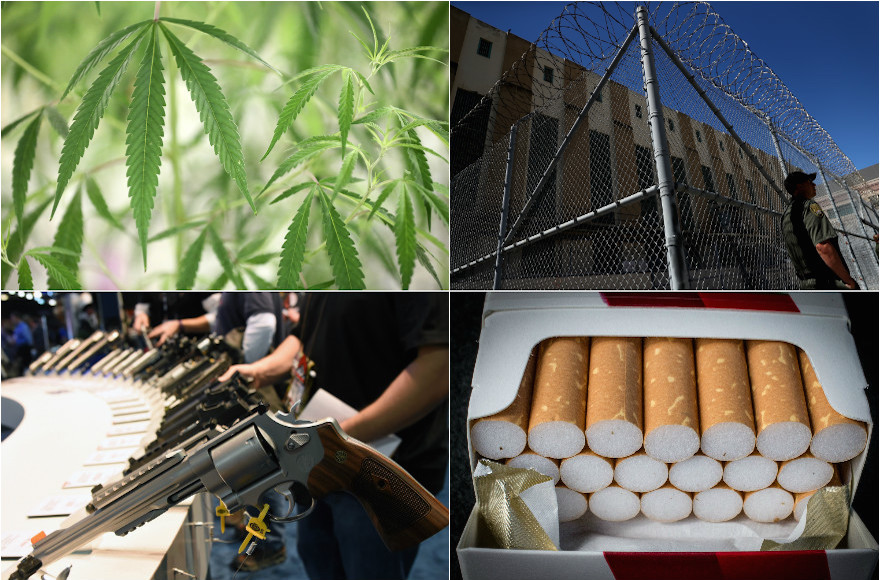 Beneath the cacophony of calls in the presidential campaign to build walls, end sexual assault, stop race baiting and “lock her up” are a host of ballot measures of compelling Jewish interest.

Jewish officials, naturally, are preoccupied with the top of the ticket, although with some notable exceptions have refrained from pronouncing on the record because of tax rules governing nonprofits and partisanship.

But ballot measures are not partisan, at least formally, so Jewish groups are less reticent in promoting and opposing measures that would fund new initiatives or change constitutions.

Jewish groups are watching a number of these closely, and in some cases have taken on advocacy roles. The Jewish Social Justice Roundtable, an umbrella for 52 groups, has rounded up affiliates’ activities in the states ahead of Nov. 8.

Here’s a review of some ballot measures:

California’s Proposition 57 may be attracting more Jewish support than any other state ballot, with advocates of its passage including the Reform movement’s Religious Action Center, the National Council of Jewish Women and Bend the Arc.

Should it be approved by a majority of voters, the proposition would increase opportunities for nonviolent offenders to obtain parole, as well as transfer to judges from prosecutors the discretion to try minors as adults.

The Religious Action Center has made Prop 57’s passage a hallmark of its Tikkun Tikvah campaign, “a statewide campaign of California Reform congregations to reform the state’s criminal justice system.”

“For this measure to win on the November ballot, we must educate the Jewish community about sentencing reform and partner with congregations of color to make sure those most affected by the measure turn out to vote,” the center said in a fact sheet on the measure.

Bend the Arc, the liberal Jewish social justice advocacy group, has published a 13-page guide on California’s ballot initiatives, and its emphasis is on justice reform. It endorses Prop 57 as well as Proposition 62, which would end the death penalty in the state. (National Council of Jewish Women is also advocating for Prop 62 and T’ruah: The Rabbinic Call for Human Rights backs it, although the group is not directly involved in advocacy.)

Bend the Arc argues that Prop 57 would redress imbalances that lead to disproportionate sentencing of African-American and Latino minors by transferring discretion to judges on whether they should be tried as adults. It quotes Maimonides: “The release of prisoners takes priority over the maintenance of the poor.”

There are nine states with initiatives related to marijuana legalization, more than any other issue.

Bend the Arc backs Proposition 64, which would add California to the four states and the District of Columbia where marijuana has been approved for recreational use. Medical marijuana is already legal in California.

“The strong case to support marijuana legalization on the basis of Jewish values stems from the deeply harmful impacts of the war on drugs marked by discrimination, mass incarceration, and gross misdiagnosis of the solution to addiction,” the group’s California ballot guide argues. “Jewish texts drive us to take responsibility for those around us. The Talmud (Shabbat 31a) states: ‘What is hateful to you, do not do to your neighbor.’”

“Because so many of the serious and chronic conditions for which marijuana is prescribed (or used) are more common among older adults, we are interested in developments in this area,” said its spokeswoman, Sharon Bender. ” We are aware that state laws loosening restrictions are often in conflict with federal policy and that there are no simple answers from a policy perspective.”

California’s Proposition 56 would add a tax increasing the cost of a pack of cigarettes by $2. The money would go to public education on the dangers of smoking.

Bend the Arc also favors this proposition, arguing that “inequities in smoking and tobacco-related disease persist across the country by race, ethnicity, education level, and socioeconomic status.”

Four states have gun control initiatives in four states. California, Maine and Nevada would increase background checks for gun and ammunition purchases. In Washington, Initiative 1491 would allow police, family and roommates to petition courts for “extreme risk protection orders” that would separate an at-risk person from his gun for up to a year.

Groups favoring the measures in some or all of the states include the National Council of Jewish Women, Bend the Arc, B’nai B’rith and T’ruah.

“These kinds of state measures are an end run around federal gridlock,” said Bender of B’nai B’rith.

“Women are the ones who are the most highly likely to be injured or killed” by guns, she said.

In the case of Washington’s Jewish community, there is a special resonance because of the 2006 shooting at the Jewish federation, which killed one and injured five.

“It had a huge impact on the Jewish community,” Berenson said, recalling that before the gunman, Naveed Afzal Haq, attacked the federation, NCJW was pretty much alone in advocating for gun controls. “That really brought people in.”

The community has taken a lead in the alliance in lobbying for passage of Initiative 1491.

Berenson noted that Haq’s parents have said they noticed his extreme behavior, and had a protection order been available to them as it is in other states, a tragedy that still haunts the community may have been averted.

Massachusetts has an initiative, Question 2, which would allow the state to add up to 12 charter schools per year.

The argument has played out across the United States. Charter supporters note that there are tens of thousands of students on waiting lists for the schools. Opponents say the schools perpetuate discrimination, taking away funding and resources from public schools that serve inner cities.

The Jewish Alliance for Law and Social Action, a Boston-based group, is working with opponents, posting on its website a letter from an alliance of parents who say that if Question 2 passes, “the opportunity gap between the suburban and urban schools will grow into a chasm.”

No word from Orthodox groups as to whether they back the initiative, but generally Orthodox advocacy groups back greater choice for parents when it comes to schools.

There are countless ballot initiatives at the local level as well.

Detroit Jews for Justice is advocating for a $1.2 million tax measure that would fund a master plan to improve public transit in the down-on-its-luck city.

The moniker for its advocacy? “Schlep for Transit.”