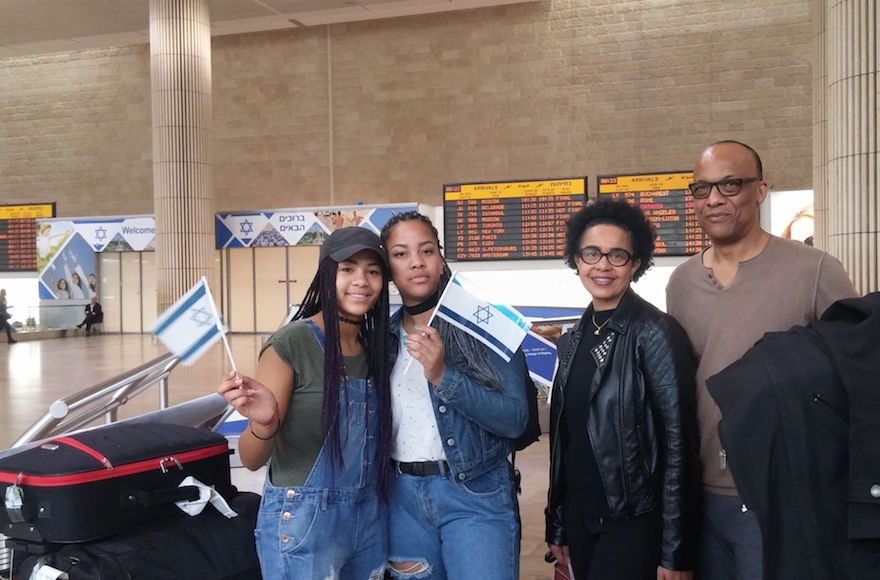 George and Amy Camara and two of their four children arriving in Israel on Nov. 2, 2016. (Courtesy of the International Fellowship of Christians and Jews)
Advertisement

(JTA) — As a Jewish family originally from the Ivory Coast, Amy and George Camara and their four children felt somewhat immune to the rising anti-Semitic thuggery in France.

The Camaras, relieved to leave their war-torn African country, settled in the northern French city of Lille in 2012. Because they fit no one’s Jewish stereotype, they said they were able to live as Jews without fear — despite, in recent years, the rise in attacks on French Jews from a small segment of Muslim extremists.

But the Camaras soon discovered that belonging to both the African and Jewish minorities also came with its own set of challenges, said Amy, the 53-year-old daughter of an Ivorian father and a French Jewish Holocaust survivor. The difficulties prompted the family to again pack their suitcases and leave France — for Israel, the only country where this unique Jewish family says it can live comfortably according to their identity.

For the Camaras, whom Amy describes as “proudly Jewish but not too observant,” life in France wasn’t “truly comfortable,” she said.

Precisely because no one from their immediate environment thought they might be Jewish, “people, even friends, would say the most awful lies about Israel and Jews in our presence,” Amy said.

“There was no single incident that made us decide to leave, it’s more of a cumulative effect,” she said.

On Wednesday, the Camaras and their kids — aged 25, 22 and twins who are 15 — landed at Ben Gurion Airport aboard a flight organized by the International Fellowship of Christians and Jews.

“The bottom line is that Israel is the only place for us to live as Jews comfortably, safely and freely,” Amy told JTA ahead of her immigration, or aliyah, to Israel.

That comfort and freedom was paramount, given the remarkable survival story of Amy’s mother, 78-year-old Solange Shuster. Given up for adoption as a toddler by her French Jewish parents who sought to save her life from the Nazis, she was the only member of her immediate family who survived the Holocaust. She met her Ivorian husband in France and moved with him to Abidjan, the Ivory Coast’s largest city and economic engine, after their marriage in 1967. (Shuster now lives in France.)

Amy Camara recalls a happy and safe childhood in Africa, where she and George, a commercial airline pilot, raised their children as Jews. But life took a turn for the worse in 2002, when the Ivory Coast was plunged into its first civil war. When another armed conflict broke out in 2011, the Camaras decided to leave “because of a combination of factors that meant we could no longer live safely there,” Amy said.

Unfortunately, the Camara family chose the wrong year to move to France. 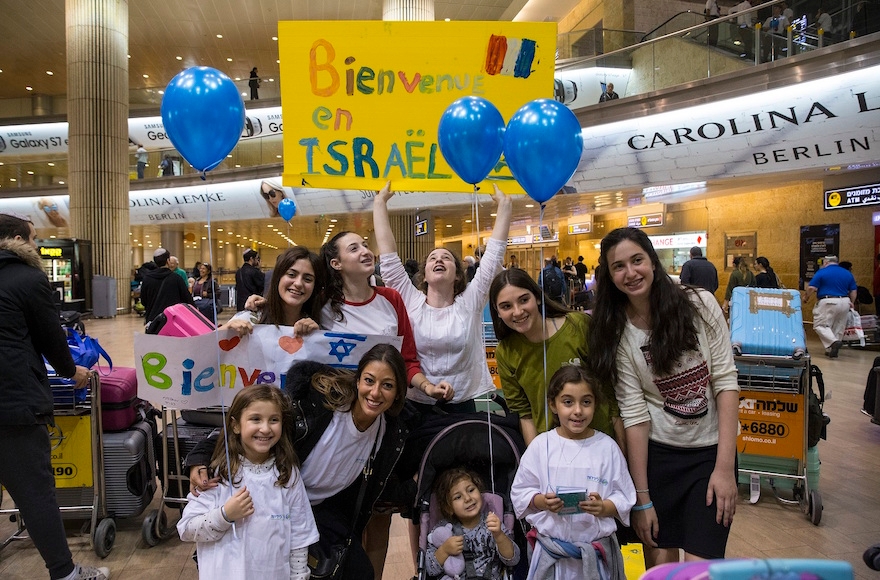 French Jews arriving at Ben Gurion Airport in Israel, Nov. 2, 2016. (Courtesy of the International Fellowship of Christians and Jews)

In 2012, the murder of four French Jews in Toulouse by an Islamist gunman ushered in what the president of the Conference of European Rabbis, Pinchas Goldschmidt, has called a “wave of jihadist murders and other attacks” that has had a deep impact on the feeling of safety of many of the 500,000 Jews living in France.

Amid repeated attacks on Jewish targets — French Islamists have killed 12 Jews in France and Belgium in three major attacks since 2012 — some 20,000 Jews have left France for Israel, including nearly 8,000 people who came in 2015 alone. That figure, a record, was more than four times the number of French Jews who came in 2011.

Aliyah from France has slowed down this year, with only some 4,000 Jews making the move to Israel in the first 10 months of 2016. Jewish Agency Chairman Natan Sharansky attributes the decrease to “some improvement in the security situation” due to the robust response by French authorities to anti-Semitic attacks.

On Wednesday, the Camaras arrived in Israel on a flight with some 50 Jews who were also making aliyah. According to Yechiel Eckstein, founder and president of the International Fellowship of Christians and Jews, the Camara family’s story “is a special one that weaves within it the story of the Jewish nation as we go from the Holocaust to rebirth, ending in Israel,” he said.

The day prior to the Camaras’ arrival, the group brought approximately 300 Jews from Ukraine to Israel, including refugees from the rebel-held east. Eckstein’s organization has brought more than 4,000 people to Israel since it began directly organizing aliyah two years ago.

In Israel, Amy and George plan to settle in Ashkelon, a coastal city with some 6,000 Ethiopian Jews — the country’s seventh-largest population of members of that community.

While Amy has heard claims by some Ethiopian Jews that they face discrimination in Israel because of their skin color, she is optimistic that she won’t encounter any racism in the Jewish state.

“I think a lot of it depends on whether you perceive yourself as a victim,” she said. “I’ve never felt excluded by any Jewish community, Sephardi or Ashkenazi, so I expect we’ll integrate easily in Israel, God willing.”