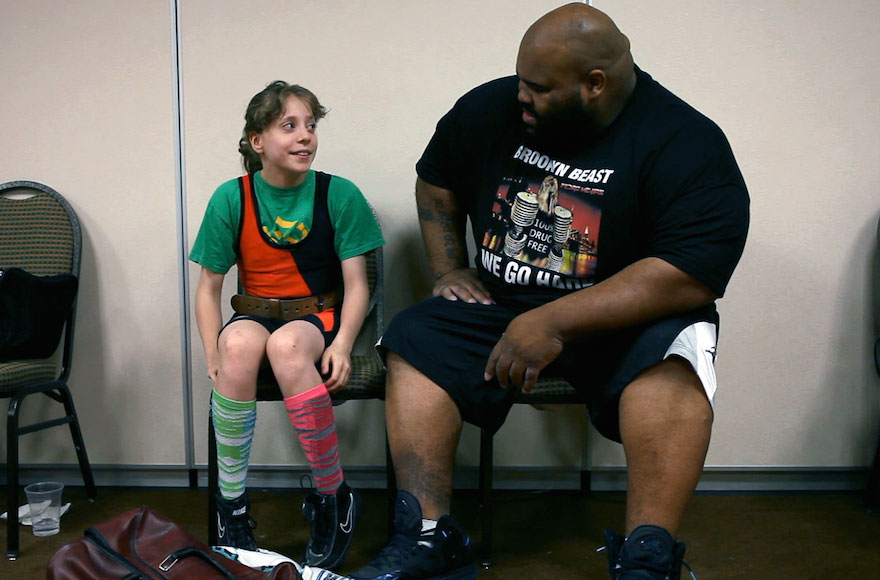 No, we’re not talking about the popular TV series about Superman’s fair-haired cousin, currently in its second season on The CW.

Rather, we’re talking about the new documentary “Supergirl” about Naomi (pronounced “Na-AH-mee”) Kutin, a real-life Orthodox Jewish girl who broke world weightlifting records when she was just 9 years old.

She has accomplished some incredible feats, but Naomi says powerlifting is only about 30 percent physical — the rest is mental.

That might help explain how the now 15-year-old made her name in the world of powerlifting in 2012. Back then, she squatted a whopping 214.9 pounds — more than twice her body weight (which, at the time, was a slight 97 pounds).

That’s also the theory held by filmmaker Jessie Auritt, who directed “Supergirl.” The documentary follows Naomi on her improbable and sometimes gut-wrenching journey, from her precocious weightlifting prowess to her bat mitzvah.

“She has this incredible willpower and motivation and drive,” Auritt told JTA. “I think if she didn’t have that inner strength, she wouldn’t be able to lift the weights.”

“Supergirl,” which makes its New York City debut on Nov. 13 at the DOC NYC festival, documents what is, at its core, a pretty absurd story.

Powerlifting consists of three lifts: the squat, which involves bending one’s legs into a seated position while holding weight; the bench press, in which one pushes a bar of weight up and down while lying on a bench, and the deadlift, which involves picking up weight from the ground and straightening one’s back while holding it. It is not a sport for the faint of heart — it’s meant for building serious muscle.

Should this slight girl from Fair Lawn, New Jersey, be lifting twice her body weight on a regular basis? The obvious answer is probably not. It’s compelling theater, but Naomi often pushes herself too far: At one point, she tries to lose a pound in a day to stay in her weight class for a competition. Another time she continues to train through a serious health issue that causes her to miss months of school.

At times, the film is almost hard to watch — albeit in a car-accident-on-the-highway, can’t-look-away kind of way. Yet by the end of the film, it’s nearly impossible not to root for Naomi, who comes off as a sweet, lovable underdog caught up in possibly the world’s most macho sport.

Auritt trains her lens tightly on the Kutin family: She follows Naomi through intense workouts in her basement — we see her eyes bulge and face turn red as she strains to hoist a bar sagging with weights — and stress-inducing competitions, where she is often dwarfed by enormous men and much more muscular women.

For Naomi, her powerlifting career was inspired by her father, Ed, who’s been competing in the sport for decades and holds national records in the deadlift. When his daughter was 8, the elder Kutin asked her if she wanted to try lifting with him.

“I was like whoa, that could be really cool,” Naomi told JTA. “I could spend time with my dad, and it’s like a really different sport, none of my peers at the time were doing it.”

But the fledgling lifter quickly showed that she possessed otherworldly strength. Naomi began training with serious intentions and quickly broke the  world female record for the squat in her weight class. She has since broken the mark three more times (in 2012 and 2013) and holds seven other national records.

She was dubbed the “strongest girl in the world” and her feats spread across the web in 2012. 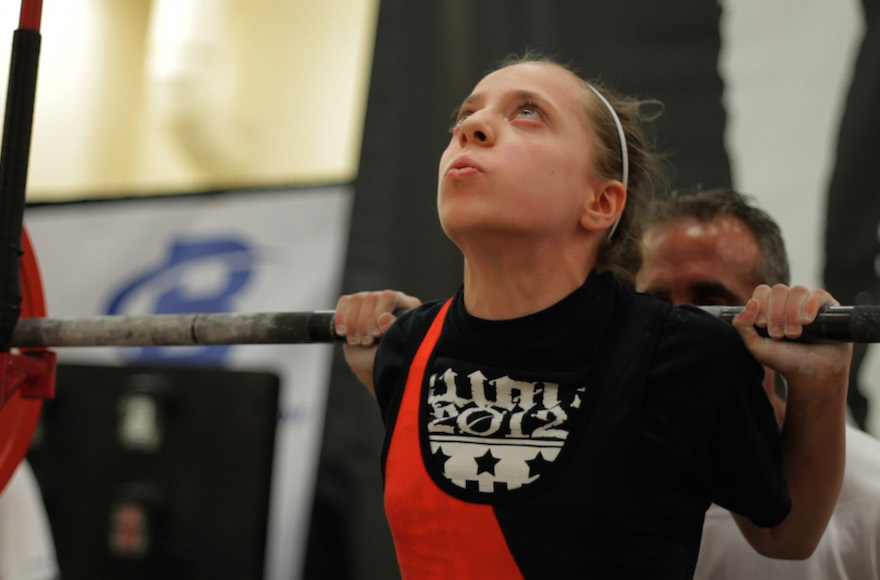 Naomi Kutin, now 15, is still training and competing, albeit in a different weight class. (“Supergirl”/Jessie Auritt)

Auritt, who defines herself as culturally Jewish, came across Naomi Kutin’s story in 2013 when she was looking for ideas for a feature film.

“The initial draw to the story for me was the intersection of the sport that she was doing — which is very male dominated and testosterone driven — and then this religion, which has very traditional gender roles,” she said. “I was interested to see what that actually looked like beyond the headlines, how this young girl was living her life.”

“Supergirl” devotes nearly equal time to Naomi’s everyday life, such as her preparations for her bat mitzvah — from practicing her Torah portion to picking the perfect dress for her afterparty.

The result is a nuanced portrait of a deceptively typical teenager. While at school, around the house or with her autistic brother, Naomi is essentially a normal young Orthodox girl — albeit one who is practiced at acting affable on camera, as Auritt points out.

While lifting, however, Naomi is determined, rabid, almost ominously fierce.

Through it all, her dedication to powerlifting never seems to clash with her religious identity at home or school (she attends the Maayanot Yeshiva High School for Girls in Teaneck). Shabbat and other holidays do not impede Naomi’s training, and her family has no qualms with her participation in the sport.

While the film doesn’t show us what their fellow synagogue-goers think of the Kutins’ hobby, the heartfelt scenes showing Naomi’s bat mitzvah convey that they are fairly beloved members of their congregation.

Asked if her athletic training has ever been motivated by or linked to her religious prayer, Naomi sounds surprised.

“I’m not sure I’ve ever thought about it like that,” she said. “I think they’re definitely two separate parts of my life.”

Other don’t-miss documentaries of Jewish interest

DOC NYC, the country’s largest documentary festival, runs from Nov. 10 to 17 at various theaters in Manhattan — and “Supergirl” is hardly the only Jewish-themed film. Other noteworthy docs to see include:

When the Beitar Jerusalem soccer club — known for its rabidly nationalist fans — signs two Muslim players, chaos ensues for the team and its fan base. (Nov. 14, 7:15 p.m., at the IFC Center)

“Mother With a Gun”

Two 60-something Orthodox twins have trouble coping with their father’s death — and let trash pile up and stray cats take over their childhood home. (Nov. 13, 5:15 p.m., at Cinepolis Chelsea)

“The Wonderful Kingdom of Papa Alaev”

The patriarch of a multigenerational family folk rock group faces a challenge from his strong-willed daughter. (Nov. 13, 7 p.m., at SVA Theatre)