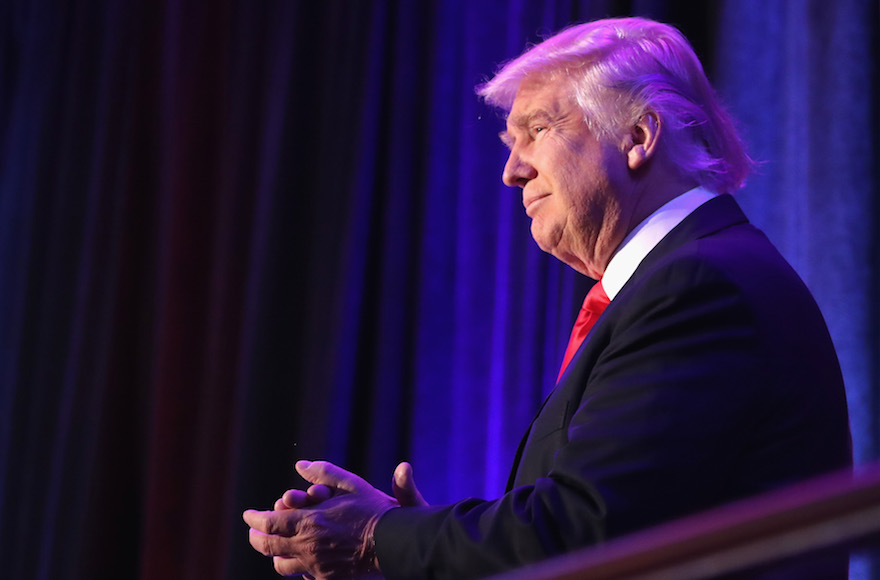 On Wednesday, Education Minister Naftali Bennett said Trump becoming the president-elect of the United States was a chance for Israel to “retract the notion of a Palestinian state.” Several politicians, including Jerusalem Mayor Nir Barkat, said they expected Trump to move the U.S. Embassy from Tel Aviv to Jerusalem, which the Palestinians also claim as their capital.

The politicians had reason for optimism. During the election campaign, Trump praised the new Republican platform, which omits past support for a two-state solution to the Israeli-Palestinian conflict and calls Jerusalem Israel’s “indivisible” capital. Like presidents before him — who did not follow through — Trump committed to moving the embassy to Jerusalem.

His Israel advisers have said Trump does not see the settlements as an obstacle to peace, would support their expansion and is not wedded to the idea of a Palestinian state. Leading security experts who still support a two-state solution, of course, say unrestrained building in territory claimed by the Palestinians could end hope for the idea. Yet even they think the Israeli government could urge the incoming Trump administration to make concessions to the right wing, paradoxically as a way to encourage territorial compromise.

Udi Dekel, the managing director of the influential Institute for National Security Studies think tank and a former negotiator with the Palestinians, had a specific proposal: Israel should ask Trump to recognize the major settlement blocs but not the unauthorized outposts in the West Bank.

“If we’re clever enough, we could take this opportunity to change the reality,” he told JTA at an INSS event here Wednesday to discuss the implications of the U.S. election for Israel. “We could give territory to the Palestinians. We could still invest in the settlements we believe will be part of Israel. We could freeze settlements we don’t see as part of a future state. But we need the [U.S. and Israeli] administrations to speak the same language.”

The approach is something of a middle path. Many right-leaning analysts argue that Israel must maintain the status quo in the West Bank and eastern Jerusalem, which it seized from Jordan in the 1967 Six-Day War, at least until the Middle East becomes less threatening and more predictable. Others, mostly on the left, see an urgent need for Israel to negotiate a withdrawal from the territories or leave unilaterally.

The United States basically adopted Dekel’s suggestion during the presidency of George W. Bush. In 2004, Bush sent a letter to Ariel Sharon, the prime minister at the time, saying it was “unrealistic to expect that the outcome of final status negotiations will be a full and complete return to the armistice lines of 1949,” or Israel’s pre-1967 borders. The letter was widely seen as accepting Israeli autonomy over major settlement blocs and Jerusalem as a fait accompli. 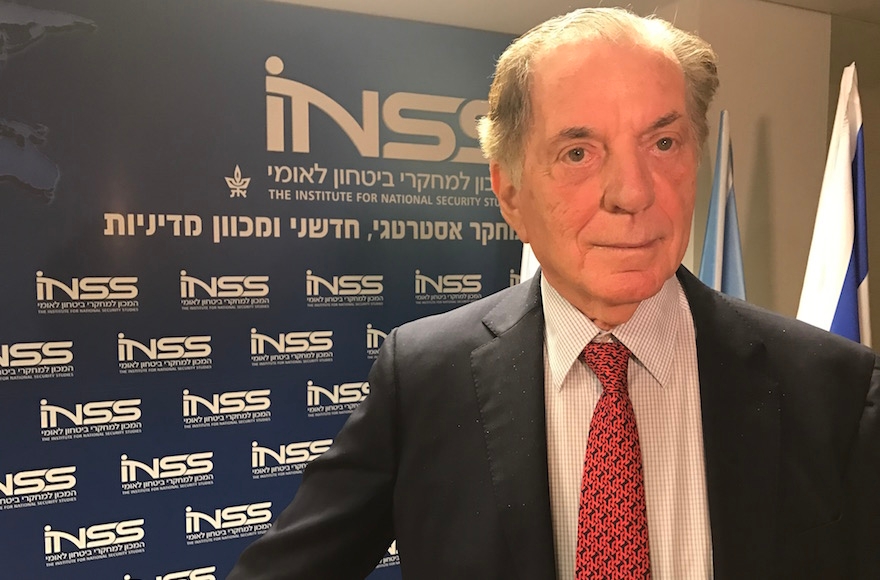 Itamar Rabinovich, a former Israeli ambassador to the U.S., speaking at the Institute for National Security Studies in Tel Aviv, Nov. 9, 2016. (Andrew Tobin)

When President Barack Obama took office a few years later, he ignored the letter. Like most of the world, he opposed all building by Israel in eastern Jerusalem and the West Bank, saying it undermined the two-state solution.

In an address at the INSS event, Daniel Shapiro, the U.S. ambassador to Israel, confirmed that Obama was weighing action to “help arrest those trends that take us in the direction of a binational reality and put us back on the path of a negotiated two-state solution.” He didn’t rule out a United Nations Security Council resolution among the options under consideration.

Like many of the experts at the INSS event, Shapiro noted there is a big difference between campaign rhetoric and governing. No one really knows how Trump will approach Israel.

Oded Eran, a senior researcher at INSS, and former diplomat and head negotiator with the Palestinians, said he expected Prime Minister Benjamin Netanyahu to wait out the rest of Obama’s term and then pitch Trump on his vision. He said Netanyahu would probably visit Washington, D.C., within a few months of Trump’s Jan. 20 inauguration and, as Dekel suggested, ask him to endorse the Bush letter.

But Eran said the prime minister would be unlikely to seek carte blanche from Trump in the West Bank, even if it were on the table. He said Netanyahu seems to understand that unfettered settlement building could make a Palestinian state unworkable, which would saddle Israel with permanent responsibility for the millions of Palestinians living in the West Bank.

Without cover from the U.S., Netanyahu would be hard-pressed to fend off the demands of members of his governing coalition, considered by many the most right wing in history. Bennett and other members of the hardline pro-settlement Jewish Home party have urged the annexation of Area C, the 60 percent of the West Bank controlled by Israel.

“I think Netanyahu wants to avoid from a domestic point of view the issue of Jerusalem and the issue of building in the major settlements. So yes, he would like to see the new administration adopt as policy the spirit of the Bush letter,” Dekel told JTA at the INSS event. “He will say, we got a green light for certain building, not for everything, and we want to keep the relations with the new president better than with the outgoing president.” 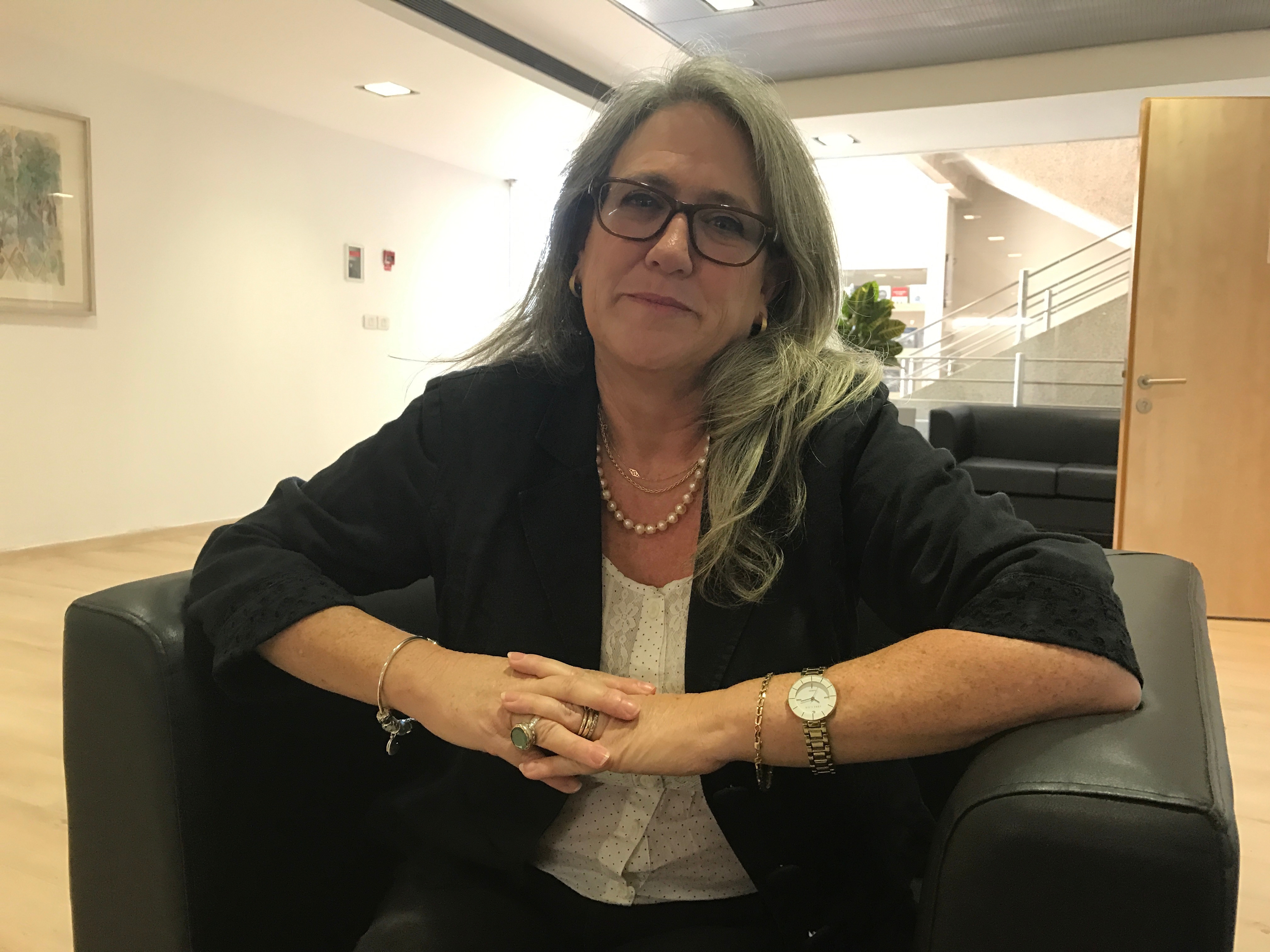 Besides preserving the two-state solution for its own sake, Israel might want to restrain itself in the West Bank and Jerusalem to preserve its international relationships, starting with Democrats in the United States.

“Probably by inclination and temperament, [Trump] is for Israel, his [Republican] party is supportive, but it’s important for Israel to go back to bipartisanship and not drift toward one political party in the United States,” Itamar Rabinovich, the president of the Israel Institute and former Israeli ambassador to the U.S., told JTA after addressing the INSS event.

In addition to congratulating Trump on being elected, Netanyahu thanked Democratic candidate Hillary Clinton for her support of Israel.

More immediately, inflaming the conflict with the Palestinians could interfere with Israel’s security cooperation with Arab states, which Netanyahu has touted over the past year. Emily Landau, a senior researcher at the INSS, said the rise of Iran has created a rare chance for Israel to formalize this cooperation, assuming the Palestinians don’t scuttle it.

“Right now there’s an opportunity, really, for setting up some framework for regional security dialogue here, something that’s always sort of on the agenda but then things happen in the Israeli-Palestinian sphere, and then you can’t do it because the Arab states can’t cooperate with Israel when the Palestinian issue is burning,” she said.

Ideally, Landau said, the Palestinian issue also would be dealt with in a regional context. But, she said, there will be no deepening of Israel’s regional ties without encouragement from the U.S. A worst-case scenario, she said, would be for Trump to embrace his isolationist tendencies, leaving Israel to deal with both the Palestinians and the Middle East alone.