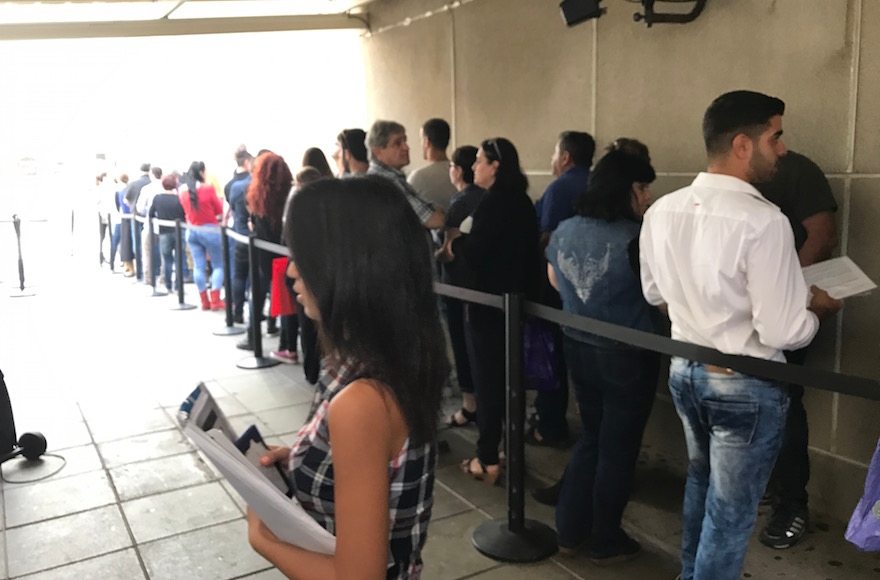 Israelis lining up for appointments at the U.S. Embassy in Tel Aviv, Nov. 14, 2016. (Andrew Tobin)
Advertisement

TEL AVIV (JTA) – Donald Trump’s surprising win may have spurred increased chatter among some Americans — Jews among them — about moving to Canada. But for Israelis, at least, the U.S. hasn’t lost its luster.

Citizens of the Jewish state are as eager as ever to visit, and Trump’s election apparently hasn’t altered their travel plans.

On Monday morning, dozens of Israelis lined up outside the U.S. Embassy here to acquire American travel documents. While the embassy does not provide official numbers about applications, guards outside the building said some 600 to 700 people were coming from throughout the country every day — in other words, business as usual.

About a dozen Israelis spoke to JTA as they left the embassy’s sprawling beachside compound, many clutching new passports or visas.

Being familiar with Israel’s fragmented politics, they were not completely shocked by Trump’s divisive rise. Though some voiced concern about his experience and temperament, all agreed that the former reality TV star would likely do a better job than President Barack Obama had of protecting the interests of Israel and the Jews, which they did not seem to distinguish.

“I think we’ve heard the real voice of what’s happening in the U.S.,” said Rachel Baram, a 39-year-old Israeli-American manager at a web development company who was renewing her U.S. passport ahead of an upcoming business trip to Orlando, Florida. “After the shock, I’m kind of optimistic. I think Trump could get things done because he’s not an idealist.

“I do think he’s kind of nuts, though,” she added, half whispering. 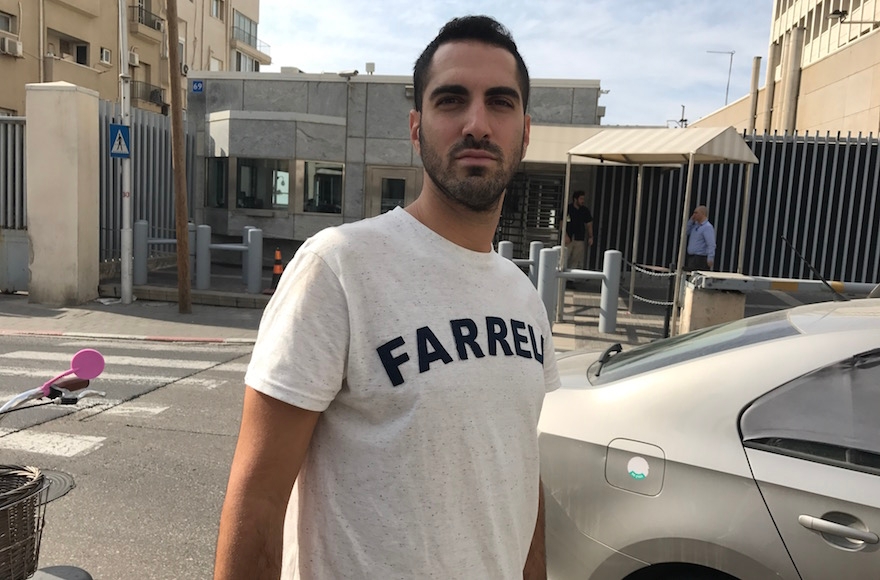 Baram said Trump appealed to so many Americans partly because the left pushed its agenda too hard under Obama — just as Israelis did in trying to make peace with the Palestinians.

“It’s the same right-left issues we have here,” she said. “The left bullies people, and it creates resentment. Then you get these reality TV politics.

“But I’m not worried about American Jews, and I think the starting point for Israel is better than it was with Obama. At least he won’t focus just on the settlements.”

Prior to the election, a survey found that Israelis would have preferred to see Hillary Clinton, a Democrat, in the White House over the Republican Trump, 43 to 34 percent — even though 38 percent thought Trump would be better for Israel compared to 33 percent who said Clinton.

According to an Election Day poll, 70 percent of American Jews voted for Clinton while 25 percent cast their ballots for Trump.

Yarin Cohen, a 21-year-old law student at Bar-Ilan University, had helped his friend get a tourist visa so they could attend a wedding together this winter in Brooklyn. He was surprised that American politics had become as “extreme” as Israel’s, but thought Trump would bring their governments closer.

“As I see it, the relationship between Bibi [Netanyahu] and Trump is an improvement,” he said. “I don’t think it can get worse than it is right now.”

Cohen did not think Trump, who railed against immigrants during the campaign, would make Israelis less welcome in the U.S. But he said he had heard from others who were concerned.

“Maybe I’m a bit naïve,” he said. “A lot of people around me are talking about it. My mom said, ‘It’s good you’re getting a visa now. It could be harder once Trump is president.'”

Haim Levy, a 26-year-old computer specialist at an American corporation in Israel, had just gotten a tourist visa to visit his family in Tampa, Florida. Levy said he understood why Americans had chosen Trump.

“I don’t think Americans were afraid — there wasn’t a big terror attack right before the election or something,” he said. “They’re just becoming more aware that radical Islam is very violent and we should try to stop it somehow.” 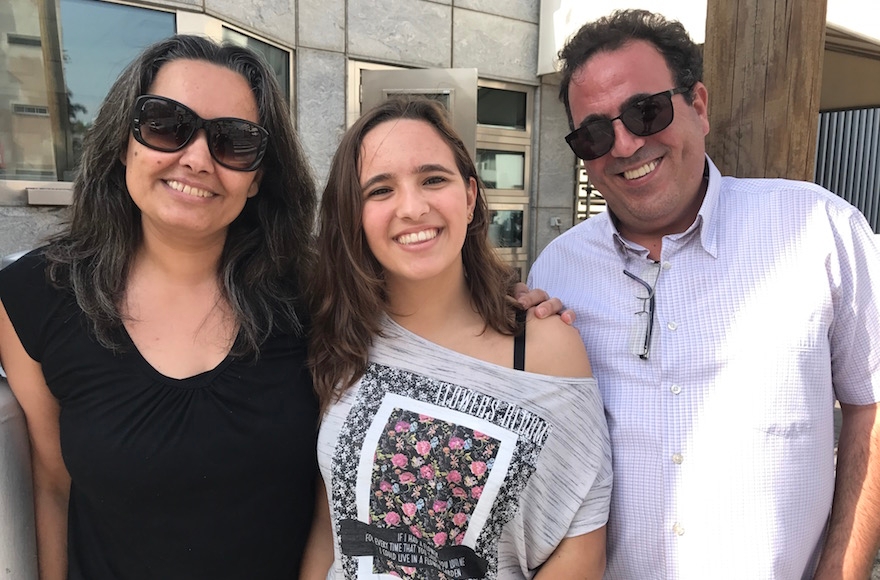 Noting Trump’s Jewish daughter, Ivanka, and son-in-law, Jared Kushner, Levy said he thought the president-elect would keep the United States “safer for Jews than most countries in Europe” and protect Israel.

Trump’s “America first” perspective isn’t so different from Netanyahu’s obsession with Israel’s security, he said. But Levy suggested that Trump could learn a little statesmanship from the Israeli prime minister.

“Trump says a lot of things in the moment that he regrets a moment later,” he said. “Bibi always knows what he’s saying.”

A 68-year-old retired secretary who was born in the Bronx — and still has the accent to prove it — had just renewed her U.S. passport along with her Israel-born daughter.

The woman, who asked to be anonymous, said she goes back to the U.S. twice a year and has no concerns about the status of American Jews under Trump. As the daughter of Holocaust survivors, the ex-New Yorker said she found comparisons of Trump and Adolf Hitler ridiculous and said Trump should not be held responsible for the white supremacists among his supporters.

“Talk to people who went through the Holocaust,” she said. “They will tell you what Hitler is.”

“I just hope he doesn’t screw it up. I hope he doesn’t build that wall he promised on the border [with Mexico to keep out illegal immigrants],” the woman said. “It reminds me of the Berlin Wall.”

Karen Kadosh, 15, from the northern city of Safed, had just acquired a tourist visa to spend a week as part of an exchange with a Manhattan Jewish school. The high-school freshman said she was waiting to see what Trump would do before reaching any conclusions. But her teachers told her not to bring up the subject with their American peers.

“They said it’s a sensitive subject or something,” Kadosh said, shrugging.