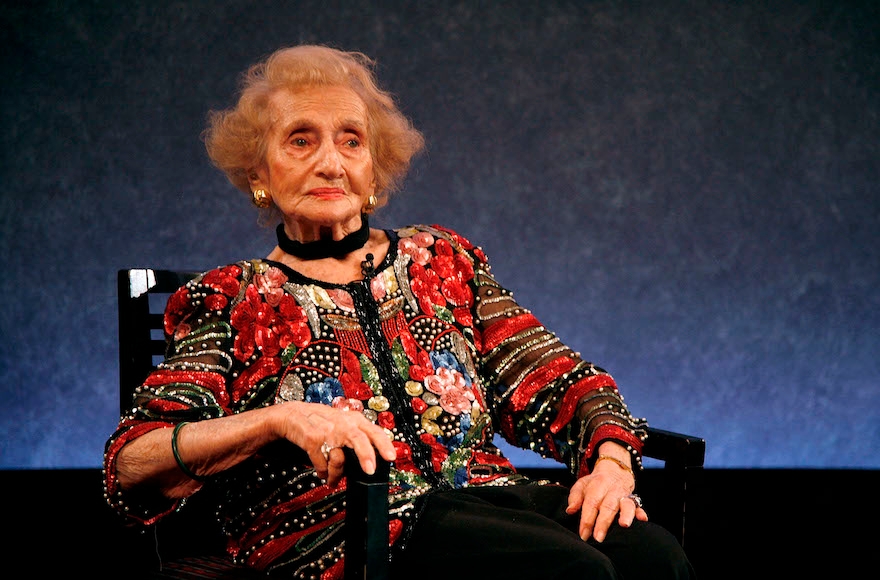 (JTA) — Ruth Gruber, an American journalist who escorted 1,000 Jewish Holocaust refugees from Europe to the United States, has died. She was 105.

She was known for her 1944 journey from Italy to New York aboard a ship carrying refugees from concentration camps.

Despite the risk of sailing on waters patrolled by German submarines, then-Interior Secretary Harold Ickes appointed Gruber to travel with the refugees to “hold their hand,” as she recalled him telling her in “Inside of Time,” a book she wrote about that journey.

Aboard the ship, the refugees, some of them too old to walk, called Gruber, then 32, “Mother Ruth,” according to the Post’s obituary of her. Fluent in German and Yiddish, she organized English lessons, cared for the seasick and taught at least one refugee her first English song — “You Are My Sunshine” — the Boston Globe reported.

Together they made the two-week journey without attack, and the refugees arrived in the United States “safe beyond their most roseate dreams,” according to a New York Times account at the time.

Until the end of her life, Gruber remained convinced that the United States could have saved many more refugees.

Gruber worked as a photographer and reporter for the New York Herald Tribune in 1947, when she became the first Western journalist to visit the Soviet Arctic and the gulag.

In 1947, she watched as a ship carrying 4,000 Holocaust survivors and displaced persons was turned away from Palestine. She photographed and later chronicled those events in a book that Leon Uris used to write his best-selling novel “Exodus.”

In her 70s, she was the only foreign correspondent to observe Operation Moses, the airlift of Ethiopian Jews to Israel during famine.

Gruber, the daughter of Russian Jewish immigrants who settled in Brooklyn, graduated from high school at 15 and from New York University at 18. After earning a master’s degree in German literature, she went to Germany and, at age 20, earned a doctorate from the University of Cologne with a dissertation on the author Virginia Woolf. The New York Times reported at the time that she was the youngest German doctor of philosophy.