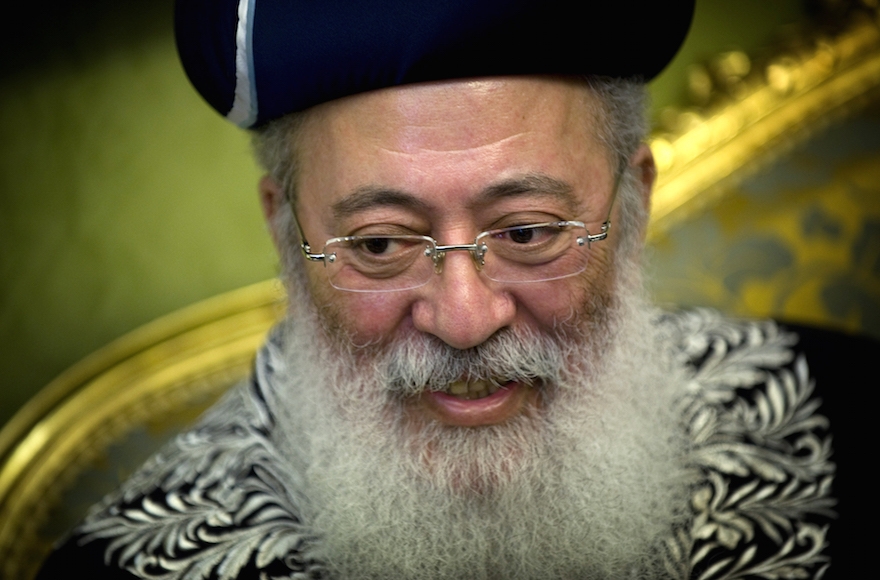 JERUSALEM (JTA) — Activists hung a gay pride flag outside the office of the chief rabbi of Jerusalem days after he called homosexuality an “abomination.”

The rainbow flag was hung overnight Saturday and a rainbow was drawn in chalk on the street in front of the entrance to the building of the Jerusalem Chief Rabbinate, headed by Shlomo Amar. Police were investigating the incident.

On Sunday afternoon, protesters gathered in front of the downtown Jerusalem building.

Amar made anti-gay comments in an interview published Friday in Israel Hayom.

“I call on them, in warm and friendly language, to leave their bad path. The Torah has forbidden it [homosexuality] and calls it an abomination,” Amar said. “It is a cult of abomination. It is clear that it is abomination. The Torah punishes it with death.”

“There is no such thing as having understanding or tolerance for this,” Amar said.

Amar said he turned down an invitation to attend a memorial service for Shira Banki, 16, who was stabbed to death during 2015’s Gay pride march in Jerusalem by a haredi Orthodox attacker, after her family refused to read aloud a condemnation of homosexuality he sent them.

Amar previously served as Sephardi chief rabbi of Israel, a position known as the Rishon Letzion.

Amar also called Reform Jews “evil” and expressed frustration over the unimplemented agreement to create an egalitarian prayer space at the Western Wall, which is backed by the liberal Jewish streams in the United States.

“There aren’t many Reform in Israel,” Amar said. “In recent years they have been importing it, this culture. What they are doing is incitement. It is not a matter of personal distress; it’s politics. I try to speak kindly, but I will not refrain from talking about Reform [Jews] or the abomination. I will not change what is written in the Torah.”

Amar faced a wave of condemnation from political and religious figures around the country for his comments. At least two complaints were filed with police, characterizing what he said as incitement to murder against homosexuals.