NEW YORK (JTA) — Thirty years ago, it would have been safe to say the American Jewish community agreed on the need to fight for Israel and against anti-Semitism.

It may still be true that most American Jews support those causes. But now, apparently, some people aren’t so sure what either of those things mean. One Jew’s support of Israel is another’s attack on the Jewish state. And as we’ve seen this week, one Jew’s condemnation of an alleged promoter of anti-Semitism is another’s smear on a purported defender of the Jews.

Nowhere did this emerge more clearly than at an Anti-Defamation League conference and subsequent Zionist Organization of America dinner. They were held days apart from each other, on the same floor of the same posh hotel in Manhattan. Both organizations claimed to fight for the same things: opposing Jew-hatred and supporting the Jewish homeland.

But their rhetoric could hardly have been more different.

The ADL, which strives to be nonpartisan in fighting anti-Semitism and bigotry (and as a result has been criticized from the right and the left), called out anti-Semitism on both ends of the political spectrum at its conference Thursday. CEO Jonathan Greenblatt aimed his strongest fire on the anti-Semitism and Islamophobia heard among some supporters of President-elect Donald Trump’s campaign, and instances in which the campaign itself sent messages that echoed anti-Semitic themes. He pledged to sign up as a Muslim if, as Trump hinted during the campaign, a Muslim “database” were to be created.  But the panel immediately after him focused on anti-Israel activism on the left.

“The harassment and hate that bubbled up around the campaign was unlike anything we’ve seen in recent history,” Greenblatt said. “The American Jewish community, our community, has not seen this level of anti-Semitism in mainstream political and public discourse since the 1930s.”

The ADL was among the first of several mainstream Jewish organizations to condemn the hiring of senior Trump adviser Stephen Bannon, who used to run Breitbart News, a website accused of publishing anti-Semitic, misogynist and racist articles. The Conservative and Reform movements, which together represent most affiliated American Jews, soon followed.

These were the same organizations that, three very long months ago, criticized the Black Lives Matter movement for accusing Israel of genocide. There was broad consensus, at least among American Jewish organizations, in condemning the BLM statement. In addition to the ADL and all three major denominations, groups ranging from right to left on Israel slammed the “genocide” claim, as did the Jewish Federations of North America and the American Jewish Committee.

No similar consensus on Bannon has coalesced among the American Jewish alphabet soup: JFNA and AJC, as well as major Orthodox groups, have stayed silent on Bannon. And at the ZOA’s dinner Sunday night, an entirely different Jewish narrative emerged.

In the same room where Greenblatt had admonished the Trump campaign on Thursday, ZOA President Morton Klein on Sunday welcomed the president-elect. In his speech, Klein, who has Tourette syndrome, noted that studies show people with the condition register slightly higher intelligence scores and joked that he would have preferred a lower IQ and more girlfriends in high school. Then he quipped: “Donald Trump told me to say that. It’s guy talk.” Minutes later, to raucous cheers, he praised Trump for being tough on Iran. “Thank God we have Donald Trump,” Klein said.

In an invocation earlier in the night, Dr. Alan Mazurek, a ZOA officer from Long Island, said Trump’s election was “divinely driven” and that “once again the United States will be blessed.” When honoree Bernie Marcus, a co-founder of The Home Depot and a Trump supporter, mentioned the New York Times, the audience booed. Marcus said he was “one of the happiest people in the world to see some sense come into this White House.”

Harvard Law professor Alan Dershowitz, a self-described enthusiastic Hillary Clinton supporter who was honored later that night, drew boos when he pointed out that Clinton won the popular vote.

Far from criticizing Bannon, ZOA had advertised that he would attend the dinner, headlining at least one email with that news. In the end, he didn’t show up. But that didn’t stop attendees from praising him. 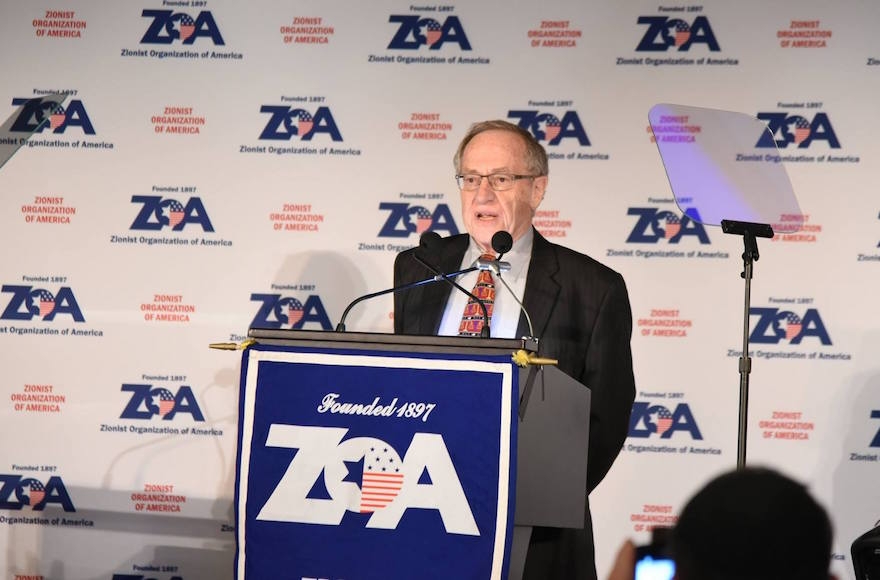 “I like the appointment of Steve Bannon a lot,” said Justin Bender, 23, a consultant from Philadelphia. “I think he’s not afraid to say what he likes. Whether you agree or disagree with Breitbart, he ran it very well. You don’t have to agree with everything, and the content on the website, to have a great environment with everyone running it.”

More than one person explained that featuring anti-Semitic content was just part of Breitbart’s goal of including a multiplicity of perspectives in the media. If outlets could present the liberal perspective, said Philadelphian Edward Mackouse, 73, white supremacists could have a say, too.

“I think you need someone strong to balance with the leftist media,” said Mackouse, who was wearing a red “Make America Great Again” hat adorned with pins. “I think the stuff we see on the left about only Black Lives Matter, with Clinton, needs to be balanced. The threats of what this does in America, starting only Black Lives Matter, gives support to the Nazis and the Ku Klux Klan in saying only white lives matter.”

The prospect of Bannon attending the dinner drew several hundred Jewish protestors to the hotel, chanting things like, “Donald Trump, it’s your fault; Stephen Bannon, oy gevalt!” The protest was organized by IfNotNow, a Jewish group that opposes the Israeli occupation.

American Jews splintered over the Jewish state long ago. Are settlements pro-Israel or anti-Israel? What about the Iran deal? Or peace negotiations?

Now, it appears, the same cracks are showing in how they perceive threats to the Jews. The ADL, while emphasizing that it is “not aware of any anti-Semitic statements made by Bannon himself,” is nonetheless troubled that Breitbart has “served as a platform for a wide range of bigotry” aimed at Muslims, women and occasionally Jews. Such bigotry, it insists, cannot be ignored or forgiven because the site is also pro-Israel.

The ADL worries that if intolerance is allowed to go mainstream once again, Jews will eventually pay the price. Its statement opposing Bannon called for presidential appointees who are “committed to the well-being of all our country’s people and who exemplify the values of pluralism and tolerance that makes our country great.”

The ZOA, meanwhile, counts Bannon as friend, pointing out the ways he has defended Israel, opposed the Iran nuclear deal and criticized leftists who bash Israel. And it wants to know why the ADL and other groups haven’t criticized the pending appointment as Democratic National Committee chair of Rep. Keith Ellison (Minn.), whom ZOA regards as an “Israel-basher” with “ties to radical anti-Israel and anti-Semitic groups.” When it opposes a presidential appointment, as it did Monday in denouncing Gen. James Mattis as Trump’s reportedly leading candidate for secretary of defense, it focuses on the threat to what it sees as Israel’s interests.

Noting statements by Mattis in support of a two-state solution and critical of the settlements, the ZOA wrote that it is “remarkable” that “Mattis expressed such a hostile attitude towards standing by our ally Israel.”