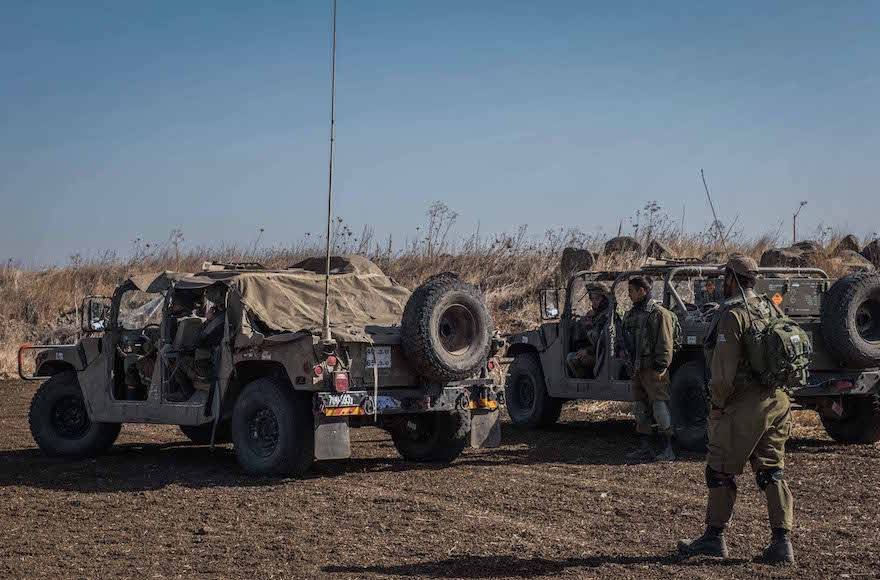 Israeli soldiers patrolling the Syrian border after a shooting incident there by members of the Islamic State group, Nov. 27, 2016. (Basel Awidat/Flash90)
Advertisement

JERUSALEM (JTA) — The Israeli Air Force struck an Islamic State-affiliated group in Syria, killing four of its members, hours after the group fired on Israeli soldiers across the border, the Israel Defense Forces said.

The IDF confirmed that its soldiers were conducting an operation in the Golan Heights in which they passed the security fence with Syria while remaining in Israeli territory. They then came under attack with machine gun fire. The soldiers returned fire.

No injuries to Israeli soldiers were reported.

It is not known if the mortar shells landed in Israeli or Syrian territory.

The Air Force launched a retaliatory attack within minutes of the gunfire. Pilots reported the death of the four ISIS cell members.

It is reportedly the first clash between Israel and the Islamic State. Most previous attacks on Israel from Syria have been accidental spillover from the internal fighting. The IDF has responded to those with return fire.

“The army will not tolerate any attack on its sovereignty and will respond severely to any attempt to violate it,” the army said in a statement.

The mortar and gunfire toward Israel comes amid renewed fighting in the area between rebel forces and the army of Syrian President Bashar Assad in a more than five-year civil war.

CORRECTION: A previous version of this article incorrectly stated that the Islamic State-affiliated group members were killed in the initial clash. They were killed by a subsequent airstrike.